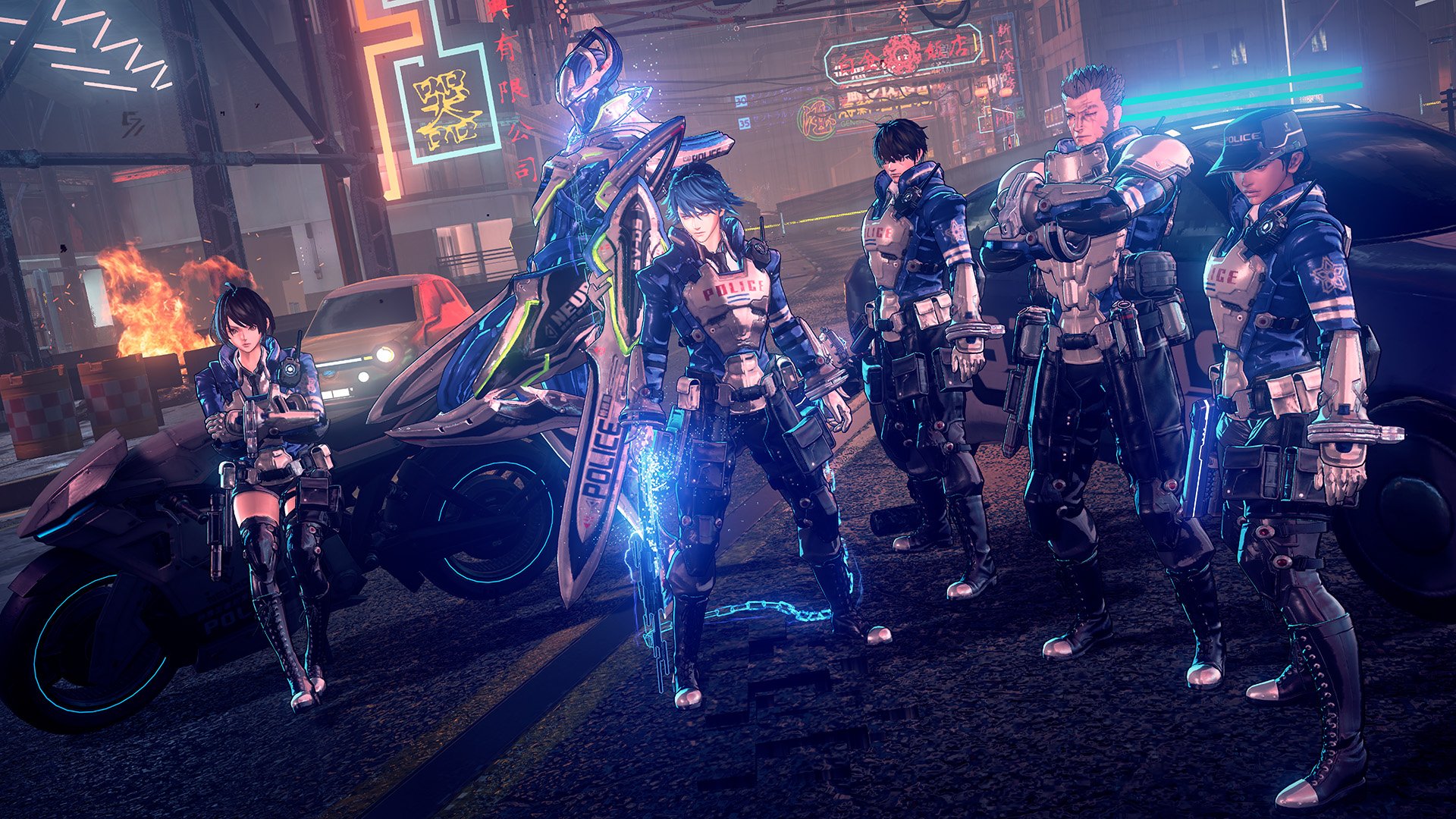 She said she’s from a quasar

When Astral Chain kicked off with a janky vehicle section, I was worried.

Then the toilet fairy came. Then the insane mechanical depth we’d expect out of Platinum. Then I got to moonlight as an office mascot named Lappy who helped out depressed co-workers.

Astral Chain looks amazing on Switch, which is a testament to the neon motif crafted by Platinum. We’re in a far-future world here so pretty much anything goes creatively, where police battle evil dimension-shifting Chimeras that the general populace can’t see. To stop them, certain elite task force members employ Legions: companions of a sort that help rid the Chimera plague and also kick-ass/look cool as hell.

It’s a very anime-sounding concept and really reminds me a lot of Power Rangers and other Sentai shows: there’s even an upbeat anime intro and a constant stylistic choice to employ slow motion and crazy camera angles during cutscenes. That’s kind of Platinum’s thing at this point, but even after all that pizzazz, I still wasn’t sold yet on the whole “cops versus demons” angle. Slowly but surely, Astral Chain builds that foundation and earns its weird wings to help differentiate it from the pack.

Yes, that growing list of endearment includes that bathroom fairy that blesses toilet paper. There’s a co-worker who wears a dog costume and talks in character as “Lappy,” the helpful office mutt (honest to God Lappy might be on some of the “best new character of 2019” lists), and I was constantly cracking a smile finding secret porta-potty collectibles, earning XP for picking up and depositing trash, or grabbing a balloon out of a tree for a kid with my over-sized Legion buddy. Astral Chain also has the best character named Kyle since Lunar: The Silver Star Story (::extremely Bill & Ted voice:: “you’ll see”). Its personable and vibrant world reminds me of Gravity Rush in all the best ways. And don’t even get me started on the adorably huge focus on cats.

But enough about charm, you probably want to know if Astral Chain is a good action game. It is! The lack of a default jump makes it a very different experience, as most of the action is grounded and focuses around the relationship between you and your Legion (of which there are five). With the tap of the ZL button your Legion is summoned, and basically fights alongside you as a co-op partner (the “co-op” phrase is apt, as a second player can even take control of them). They’ll attack automatically or spring abilities on your command, but in addition to this Necromancer/summoner playstyle, the tether that binds you together can do some really nifty Astral Chain things.

You can use it to send your Legion off to another part of the arena while you fight something else. Some Legions float, allowing you to pull yourself toward them as a sort of platforming mechanic. Also, wrapping enemies up by manipulating the chain (with the right analog stick) can stun them. So long as you can grasp the concept of using two analog sticks in tandem with one another, the sky is the limit.

Dodging is smooth and can be rapidly pressed for a combo roll, which will be your core means of defense. And it’s classic Platinum here: perfect dodges and parries (mostly done by summoning your Legion perfectly after acquiring that skill) are rewarded with counters or boosts. The little mechanical things add up and matter, like having helpful, clear buff indicators on-screen without making things too busy (that show +ATK or something of that ilk for bonus attack).

Around the third mission, when you could start customizing Legions, I was completely sold. Bosses are big and satisfying (with a healthy mix of my favorite, humanoid slugfests), including a really early series of brawls that make you feel helpless. What’s interesting is that Astral Chain is introducing new enemy types even through the final level. And yes, there is a New Game+-like option, with the chance to tackle past levels and some postgame content in an epilogue (my first run took around 12 hours, doing a fair amount of side missions). I’m also excited about the prospect of “no-Legion” speedruns to see how far people can push this tech.

It might not be as high-octane as something like Bayonetta but it’s different and can get extremely tough with high amounts of damage going out with boss combos and all of the micromanagement on top (there are two sets of “easy'” difficulty settings if you want them). It’s probably just as well that it’s not even faster because things can get choppy on the Switch when there’s a ton of action happening on-screen (but not too out of hand).

Speaking of a slower pace, Astral Chain also places a huge focus on investigations and explorations. A lot of the time you’re going to be roaming around a city, taking up optional (and fun) sidequests, looking for hidden items/caches, and browsing locales with your IRIS view: otherwise known as detective/eagle vision. Some micro-missions involve busywork, like arresting drug dealers or talking to citizens, but the rewards are on point and the optional nature of it allows you to get down to business if you really want (even sparing stealth missions can offer up a “brute force” option, which more games should really do!).

Then there are the dimensional rifts, which are sort of a digital dystopian universe where the Chimeras reside. Every so often you’ll pop into one of these (for the critical path or side quests), and embark upon a journey of battles on top of fascinating Legion-based puzzle sequences. I actually wish there were more of these! They really do a good job, along with the investigations, of adding more depth to Platinum’s action resume.

Whatever criticism you can throw at Astral Chain, you can’t say it isn’t unique. In the first few hours, I was all over the place when it came to an assessment, as it can take some time to really turn it up. But when it does it just clicks, and I don’t want to stop playing it.