Not great, but not Thorrible

About 35 hours into Assassin’s Creed Valhalla, I unlocked the “Silent Viking” achievement for killing 10 consecutive enemies without alerting anyone. It really drove home how different this Assassin’s Creed is from all the other Assassin’s Creeds. In previous games, maybe Origins or Odyssey, I would’ve methodically dismantled entire fortresses and earned that same achievement within the first few hours.

Assassin’s Creed Valhalla is indiscreet and inelegant. It’s a brash spectacle that’s more interested in glorifying the toils of war than with quietly subduing and destabilizing the enemy. It’s more Viking than assassin, so much that Valhalla feels out of place in the Assassin’s Creed lineage. It’s a wayward-growing branch on the family tree. 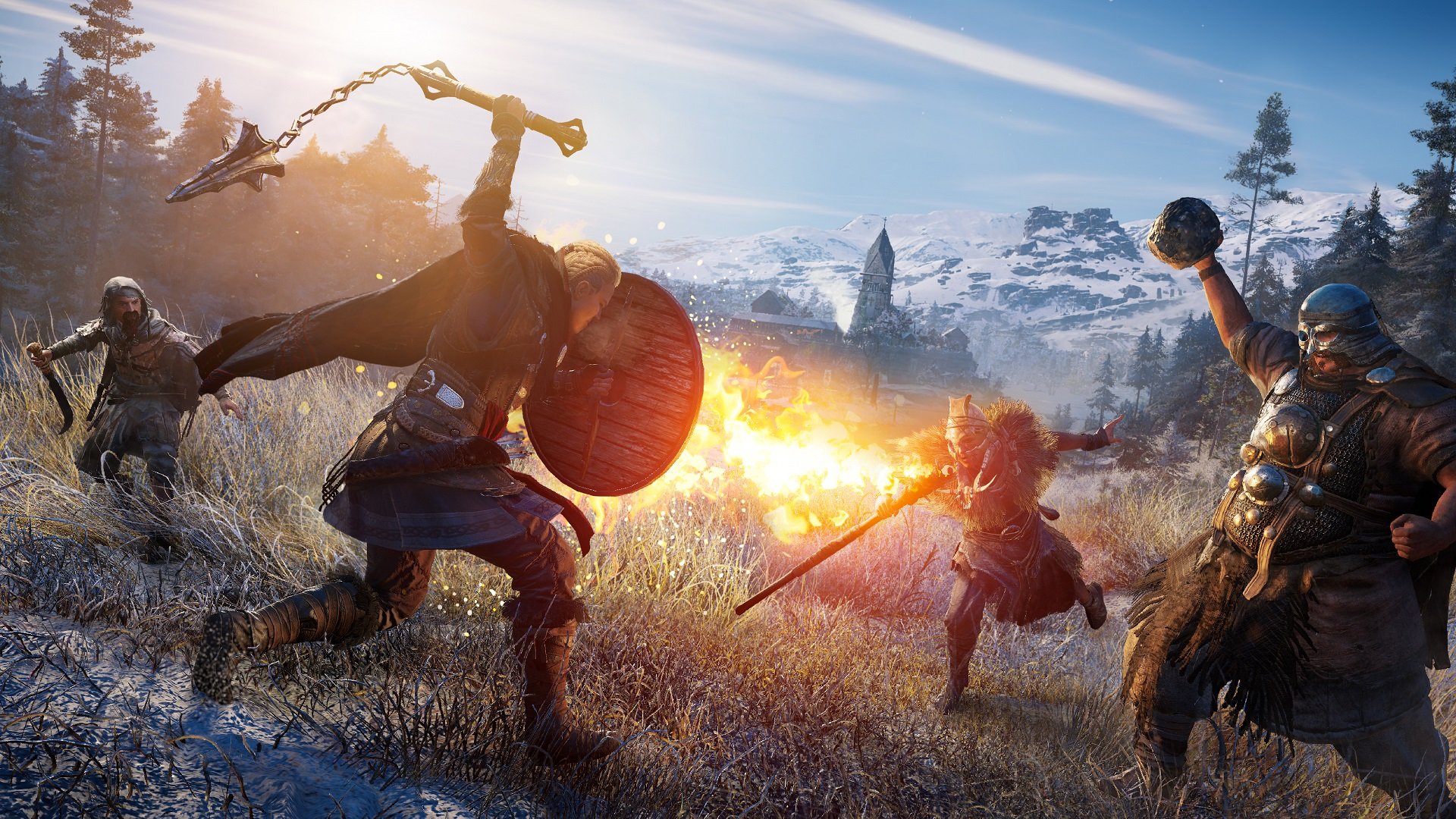 The Vikings are going to England! After an extended prologue in Norway, Assassin’s Creed Valhalla protagonist Eivor and his/her brother Sigurd take on the Saxons in England. (I played as male Eivor, so, in the name of simplicity, let’s just use he/him pronouns for the rest of the review.) It’s a beautiful land, and the Vikings intend to take every square inch of it.

That’s the real impetus for this entire tale. Assassin’s Creed Valhalla trades a compelling plot for all-out conquest. The Vikings are Hel-bent on forcefully annexing the entirety of England, making it their home and taking over the land. The entire game is literally about expansion for the sake of being bigger. In that sense, this is the quintessential Ubisoft game.

To that end, each of England’s distinct regions tells its own narrative. Eivor needs to curry favor or overthrow whoever reigns in each area in order to forge a Viking alliance. Assassin’s Creed Valhalla ends up feeling like a collection of mini-stories instead of a grand overarching epic. Certain threads pop up to string the whole thing together, but it’s a largely disjointed plot and usually only serves the immediate cause.

It’s a problem because Assassin’s Creed Valhalla is a very large game and it often feels as though there’s nothing irresistible enough to keep pulling you along. It extends beyond the critical path. There’s a tangled web of Templars who need assassinating (exactly like Odyssey‘s Cult of Kosmos) but there’s no fascinating side plot that’ll leave you wondering who’s at the head of it all. There’s a thematic bent toward Norse mythology, but it’s not apparent in the overworld; that stuff seems to be mostly confined to interactions with a single resident at your base camp.

The combat — and there is a lot of it — is generally excellent. Valhalla carries over the same combat system from Origins and Odyssey, a straightforward iteration of the From Software-style light-and-heavy stamina-based attacking. It also continues the trend of outfitting the protagonist with a suite of abilities that hinge on an adrenaline meter. It’s good that the fighting is fluid and fun because Ubisoft really quadrupled down on the number of frays you’ll find yourself in. 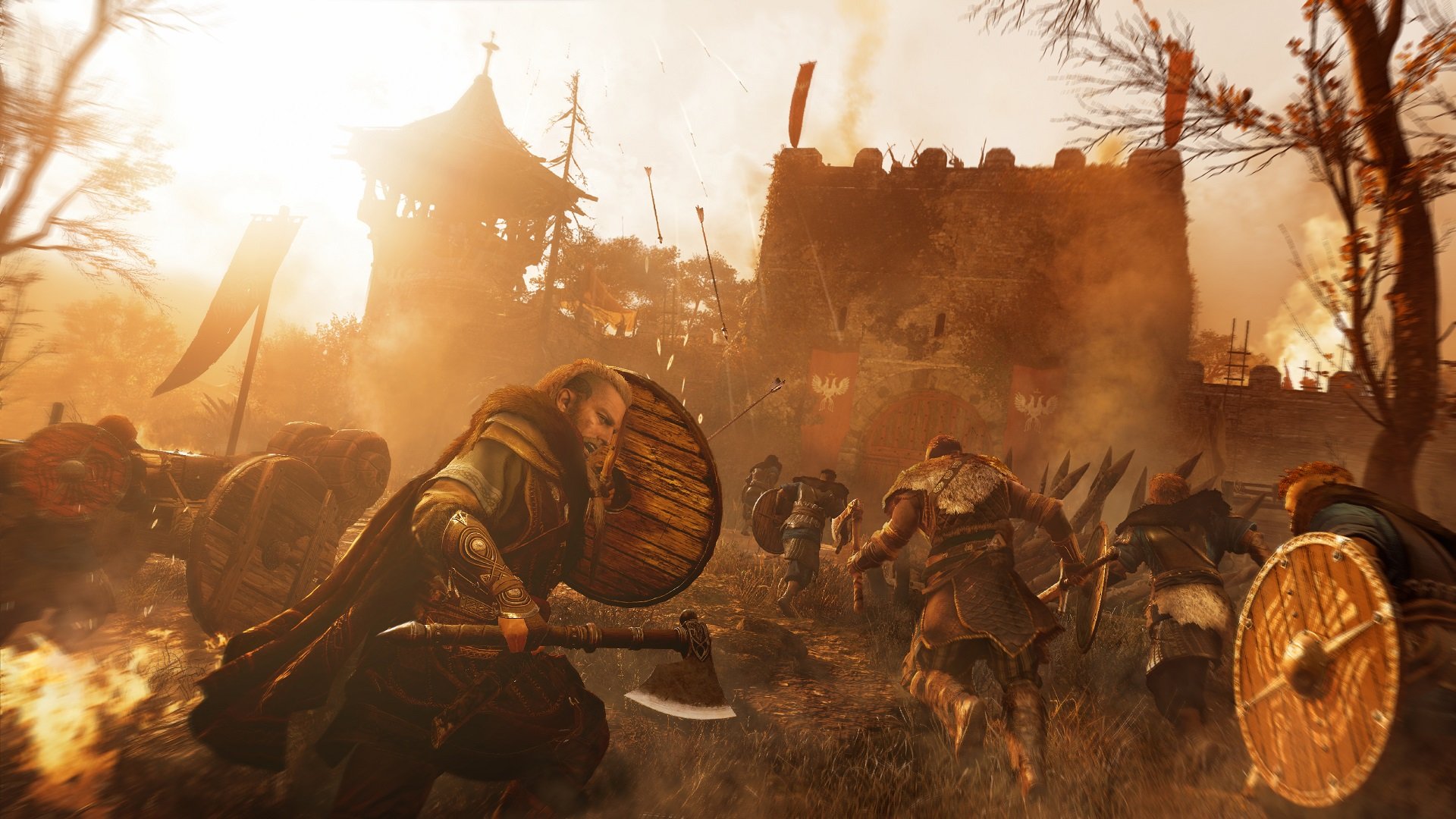 However, Ubisoft also scaled back almost everything else from the way it was represented in Odyssey. Assassin’s Creed Valhalla is much less of an RPG. Eivor doesn’t feel as though he’s given much autonomy over the story’s direction, and the dialogue choice conversations fall short of making an impact more often than not. The gear system has been significantly stripped down, as the equipment Eivor receives is mostly found as semi-major rewards for exploration. In my view, saving us from juggling dozens of not-special piece of gear is nothing short of an improvement.

Similarly, the leveling structure has been overhauled. Gone are the days of an overall character level, instead replaced by a total count of the number of skill points earned. Every time you fill the progress bar, Eivor is awarded two skill points to spend on a gigantic sprawling constellation map of perks. It’s mostly minuscule gains to facets of gameplay (health, light attacks, melee resistance, etc.) but there are also abilities mixed among each cluster of skills. It’s a fine enough system, although it usually seemed like I wasn’t speccing toward any sort of build because most of the skill points just went toward increasing the behind-the-scenes numbers a tiny bit. 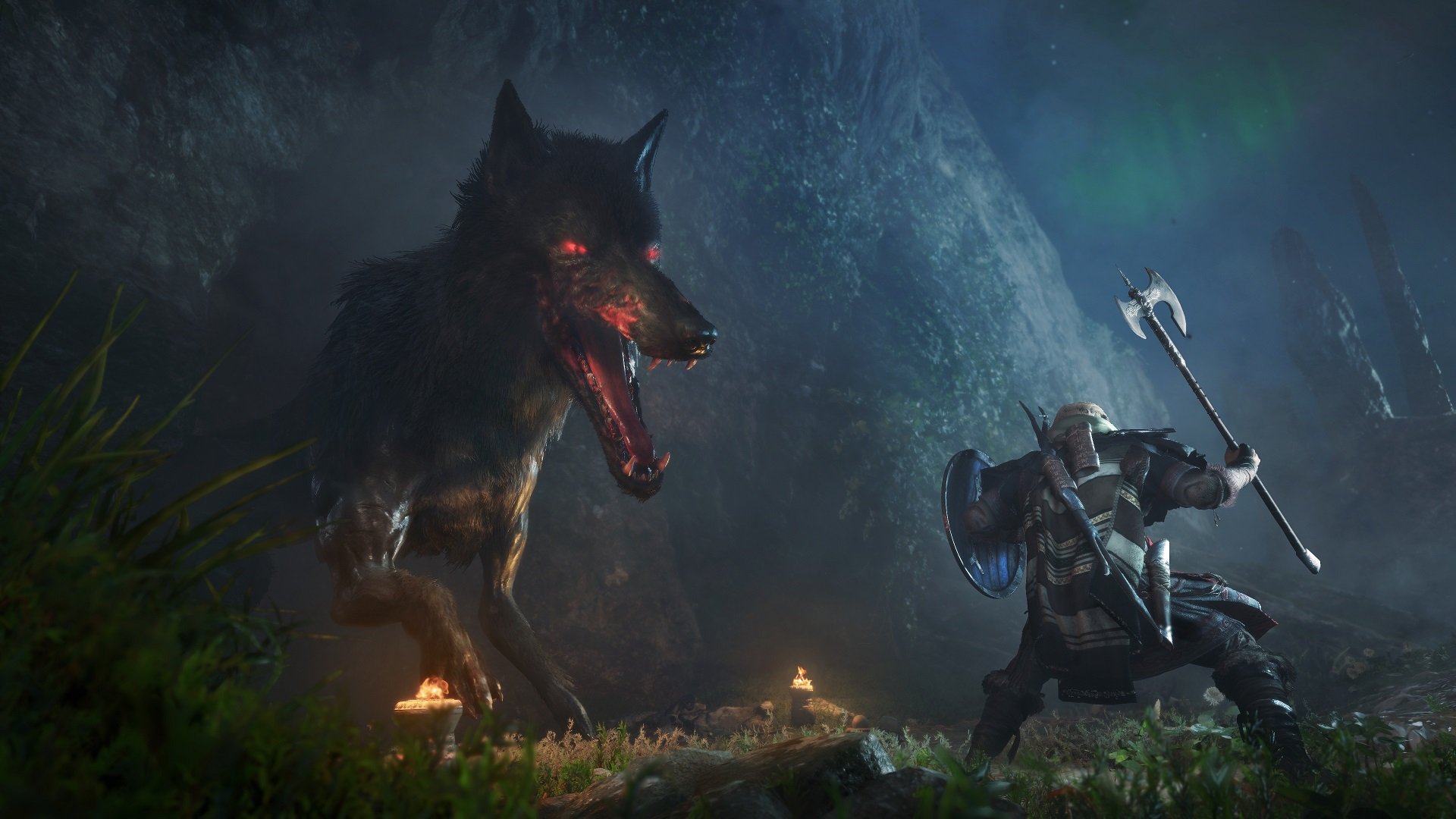 This renewed approach to leveling also means that there’s no real grinding required due to mid-game level gates. The regions of England each have their own suggested power level but that’s a soft gate to discourage tackling something that’s meant for later-game stuff. Through the main campaign and moderate side-questing, you should be properly equipped to keep progressing without any major detours. Ubisoft also learned its lesson from Assassin’s Creed Odyssey and isn’t selling an XP-boosting microtransaction this time. (Although, to be fair, I beat Odyssey without that time-saver and always felt like the controversy was overblown.)

Even though I wasn’t especially enamored with the narrative design or the gameplay loop, I still found a lot to like throughout the rolling hills of England. Some of the more interesting parts of Assassin’s Creed Valhalla are hiding among the many encounters in the open world. These world events are little two-minute distractions that tell a quick story. Finding a cat lady, and letting the felines chase away the mice in a field. Helping a man toss all his possessions off a cliff before he stuns you and throws himself off the cliff. Sometimes it’s simpler like going on a magic mushroom trip or destroying a cursed object. These interactions are when Valhalla is comfortable getting weird for a little bit, and they’re among the best this game has to offer. 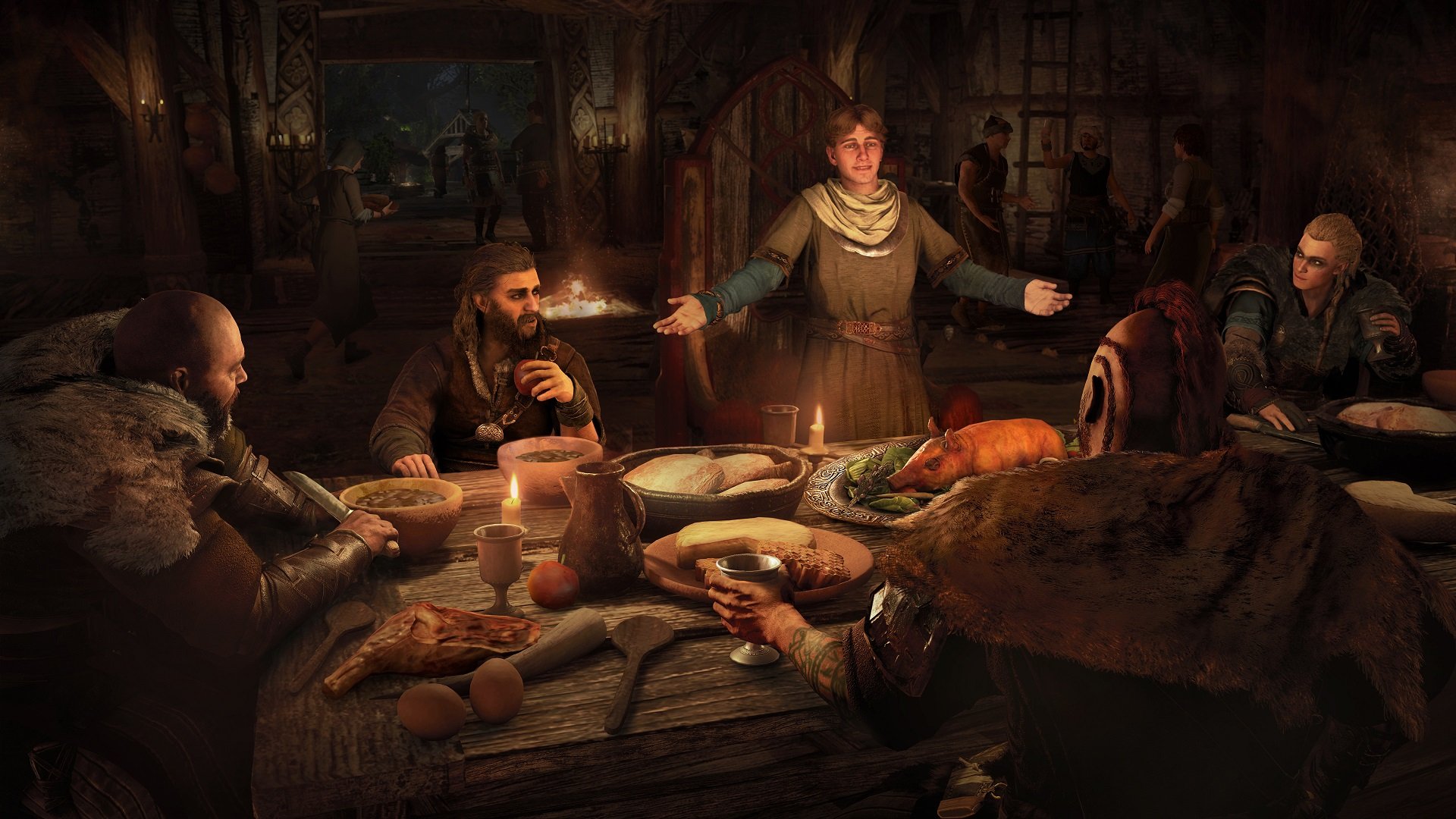 While Assassin’s Creed Valhalla falls into a rote routine, it isn’t without its exclamation-point-worthy “Holy shit” moments. The story crescendos at certain junctures in ways that inject life into this long romp. Odin overseeing a late-game death sequence left me stunned. A mid-game battle atop a cliffside is among my favorite sequences in any Assassin’s Creed.

But I also found myself making excuses for Assassin’s Creed Valhalla until I couldn’t any longer. It mimics the Odyssey formula but takes a step backward in almost every way. It sacrifices story for scale. It’s designed to discourage stealth in favor of epic battles. It’s true to the Viking experience, but it isn’t true to the Assassin’s Creed experience. That’s why it comes off feeling like the least essential game in the whole series. Impressive in some of its accomplishments, but inessential all the same.