As reviled as it is (justifiably or not), Prometheus deserves a little pass for being unlike its Alien siblings in large part because of its branding. It may be in the same canon, but it’s not pretending to be an Alien movie. And, at the time, no one had made anything halfway decent related to the property in decades. It’s not good, but what are we going to compare it to? Alien Vs. Predator? Things have changed since then; in 2014, we got Alien: Isolation, a game that understands why its source material is so damn scary. The marketing campaign for Alien: Covenant would generally lead one to believe that it had been created with that same understanding. It was a return to the Alien branding and, hopefully, a return to Alien form.

Look, I’ve seen blatant misrepresentations of movies before in film marketing (Crimson Peak comes to mind), but never anything as willfully and viciously false as the campaign for Alien: Covenant. Let’s not mince words: Everything you think you know about this film is a lie.

That badass poster that’s been popping up in movie theaters over the past couple of months, showing a shadowed image of a Xenomorph beside just the word “Run”? Lie.

The (majority of the) first trailer where a Ripley- Katherine Waterson is leading a mission onto an alien world? Lie.

The entire first four and a half minutes of the “Extended Clip and Trailer?” A gosh damn lie.

So what is Alien: Covenant? It’s garbage.

Coming from Covenant’s marketing campaign, you might be surprised by the first name in its opening credits: Michael Fassbender. And right off the bat we know that something is wrong, because in the trailer that was pretty cool for two minutes (before being very, very stupid right at the end), you see Fassbender… twice? We’ve been led to believe that Katherine Waterson is our protagonist, and yet we don’t begin the film with her (rather with Fassbender’s David character, from Prometheus). And then we go to Fassbender’s other character, an android named Walter. We aren’t introduced to the cast until after the first exciting thing happens: A solar event damages the ship and forces the crew members from their cryosleep. In the chaos that ensues, we finally meet our Ripley. And it just goes downhill from there.

The first thing you see Daniels – the Strong Independent Woman who is going to take down the xenomorph at the end (one would assume) – do is fail to get out of her sleeping pod. You see some guys get out, then they help her. And then her husband, played perplexingly for less than two minutes by James Franco, can’t get out… but no one can get him out either and he burns up in his pod. And then we’re treated to our Strong Independent Woman being sad about her dead husband while watching a video he left her on a tablet.

But Daniels doesn’t take over; she’s second in command to Billy Krudup’s character, who is sad that no one respects him and thinks it is because he is a man of faith (there is no evidence to support this). Their ship is transporting a couple thousand colonists to their new home, but after the solar incident and the death of their captain, everyone is a little iffy about getting back into their cryogenic pods – especially since Walter tells them there is a not-insignificant chance that this kind of thing could happen again. Conveniently (or not), they receive a distress beacon from a nearby planet that falls perfectly within the habitable zone. It’s weeks away rather than years, so Krudup decides they should go check it out.

When hell breaks loose however many minutes later, I found myself thinking not about what I was seeing but about my complete lack of reaction to it. Technically, there’s some good stuff here. There are some genuinely great shots, and the production design in general is very cool. But functionally there’s nothing. You know what emotion you’re supposed to feel because you have an understanding of cinematic language. The music swells, the camera gets shaky, and the editing gets jumping; oh, something tense is going on. But I don’t feel any tension. And then I’m watching Amy Seimetz fire on a baby xenomorph and thinking about why this doesn’t work for me. Even the body horror stuff that sort of worked didn’t really work.

The Chestburster in the original Alien was a genuinely shocking moment. It’s probably one of cinema’s most iconic images, and works on pretty much every level. Alien: Covenant knows that a xenomorph bursting from a chest isn’t good enough anymore, so it has a few much more disturbing ways to birth aliens from a human body. And they’re definitely disgusting, getting the grossed-out reaction from the crowd that they were going for, but the intensity of the violence doesn’t actually serve the plot in any meaningful way. It’s just horrific imagery for the sake of it, there to shock the audience more than the characters in the film. You may appreciate the inventiveness for a moment, but then you have to deal with the CGI xenomorphs that come out and all the gorgeous practical effects that lead up to it can’t stop you from groaning.

Or laughing. The audience laughed a lot. They actually clapped a couple of times, usually after the Xenomorph had killed someone in a particularly vicious way. I wondered about that: Why? Was it because the characters were so boring that everyone was just glad they were dead? I mean, I had already forgotten several of the characters by the time the credits rolled, only remembering once I rewatched the trailer just to make sure that it was, in fact, selling the same product that I had just witnessed.

The crew on the Covenant probably had names, but I only remember two of them: Daniels and Tennessee. (There is also Walter, but we’ll get to that later.) Tennessee is played by Danny McBride, and he’s got a fairly unpleasant personality, but he’s the only one who actually has personality at all. The characters are largely expendable, and the script seems well aware of that, because it makes no attempt to develop anyone who dies early and only a marginal effort to develop the ones who make it to the third act.

The four-plus-minute scene that I mentioned earlier, a slice of which is featured in that trailer, is important because it’s not actually in the movie. Like, at all. And it’s interesting because watching that clip after seeing the film, I saw more character development for some of those people than in the entire two hours of nonsense I sat through. I would assume that it was originally supposed to be part of the film; it seems odd that it wouldn’t be, and it’s the only time James Franco says things while alive. It actually feels like it’s from a completely different movie. They talk about the crew members, but make no reference to all of the other (sleeping) colonists on the ship. Watching that, I would never have known that they weren’t the sole bodies aboard the Covenant. And sure, it makes only marginally less sense than the stuff the characters actually do say, but it leads me to wonder what place it was supposed to serve… and what the movie was supposed to look like. 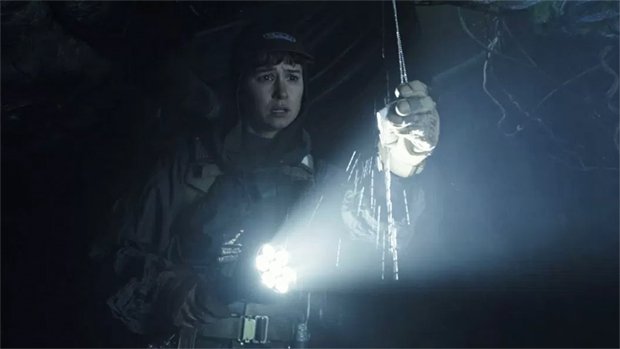 Because I don’t believe for a second that Alien: Covenant is the movie that it was supposed to be. Clearly it’s not the movie that Fox’s marketing department wanted it to be, but I have trouble believing it’s the movie Ridley Scott was trying to make. Then again, I don’t have any idea what movie he was trying to make, because there’s no consistency of any sort. Really, it feels like the movie is fucking with you sometimes. Nowhere is this clearer than the truly bizarre sequences like the one where Michael Fassbender as David (who just-so-happens to be on this planet) is showing Michael Fassbender as Walter how to play the recorder. The camera swings back and forth in a long take as one Fassbender tells the other about “fingering holes,” something that happens for several straight minutes. That sequence is probably as long as the character-building clip I mentioned that didn’t make it into the film… yet somehow the innuendo-filled recorder scene is important?

At first, I was convinced that David was going to kill Walter and take over his place at this point, maybe force the recorder through Walter’s throat, but no: He literally just shows him how to play the recorder. It’s just two Michael Fassbenders, like Ridley Scott finally figured out the facial technology that David Fincher has been using for years and wanted to show it off. Look, Fassbender is one of my favorite actors, and if they want to have scenes of just him talking to himself, that’s fine… but this is just stupid.

As with most scenes David is in, there seems to be an attempt at philosophy. As I mentioned, Fassbender is the protagonist, both as David and Walter. They’re two very different models of the same Android, and the underlying logic behind their creation could lead to some interesting discussions. There are hints of that, and other things. David talks (constantly) about creation and perfection and humanity and love, but these proclamations aren’t part of a dialogue. It’s like listening to a college freshman who read “Ozymandias” for the first time and has now figured out the meaning of life and really, really wants to tell you about how cool he is. He says vapid things in vain attempts at profundity, and it’s just sad. It’s theoretically an extension of the ideas raised in Prometheus (particularly with regards to creation), but it’s ultimately nothing at all.

And that’s Alien: Covenant as a whole. It’s nothing. By the time this review is published, I will likely have forgotten everything about it, except for the feelings it left me with. I wanted it to be good; I wanted that oh-so badly. I wanted Ridley Scott to prove he still had it. But Covenant proves he does not. This is Scott giving up on his most famous franchise. This is me giving up on him.