I spent $80 on a double-pack of Cave’s Muchi Muchi Pork and Pink Sweets when I visited Tokyo last fall. Some people might think I’m crazy for paying that much on what could easily be a $5 downloadable game. But if you’ve been bitten by the shmup bug then you know who CAVE is and why such a purchase isn’t only acceptable but absolutely necessary as a fan.

There are some things money can’t buy, however, such as a way to play a region locked game on an American Xbox 360. This was the case with the overseas release of Akai Katana. Okay, so I could have just bought a Japanese 360 but even I have my limits. Good thing I didn’t because the game has finally reached the West and Rising Star Games has given it the most polished packaging to ever grace a CAVE release. Akai Katana deserves it too, because it is among the developer’s best.

Unlike other gaming sites, I’m not going to spend three paragraphs explaining danmaku, CAVE’s history, or Akai Katana’s asinine plot which is confined to press releases and a brief intro/outro. So go visit Wikipedia and come back if you must. Okay, now let’s talk about what matters: mechanics and presentation.

More than any CAVE game before it, playing Akai Katana for the first time versus playing it with full understanding of its systems are radically different experiences. On its surface, AK is deceptively simple and familiar to a CAVE fan. You dodge a ridiculous amount of colorful bullets, rapid fire for quick maneuverability and weapon spread, hold down fire for a more powerful direct attack, use bombs when necessary, and enter a spirit form that alters the battlefield. It’s very easy to reduce the game to being Deathsmiles meets Espgaluda, until you get neck deep in the scoring system. 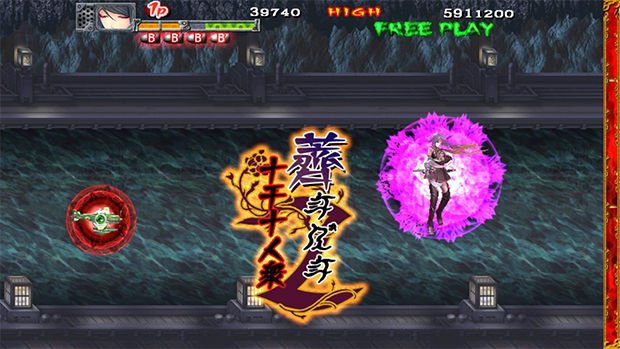 AK is a game all about scoring, but it’s so well designed that even players striving for a one credit playthrough will be using many of the same strategies for survival. There are two precious resources in AK’s arcade mode and Climax mode (a rebalanced, uprezzed 16:9 version for 360): energy and gold. Energy is acquired from defeating enemies or by hovering your option — you know, the little gunner floating around your ship — over an enemy. There are subtle ways to quickly and greatly acquire energy, which is vital because it fills your spirit meter. Gold, the key to getting a high score, is acquired by defeating enemies in your spirit form.

As an aggressive shmup player, AK is a game designed for me. When you enter spirit form, you are invincible as long as you don’t fire your weapon. Enemy ammunition simply bounces around you until they pile into a sea of 200+ pink, blue, and red bullets. In order to clear the debris, you need to destroy nearby enemies that spawned them in spirit form. This creates an unbelievably tense feedback loop of racing into the heat of activity while being in the eye of a bullet whirlwind. It’s exhilarating.

Text isn’t the ideal form to convey these concepts nor the nuances to mastering the game. I highly advise taking a look at Rising Star’s tutorial videos to get a better grasp of the game (also available in the game’s menus). Once you understand what’s going on under the hood of AK, you’ll enter spirit form without thinking about it and rack up high scores you didn’t think possible upon your first attempt. It’s an enormous amount of fun, but if you approach the game without an understanding of its systems you’ll be out in the cold. 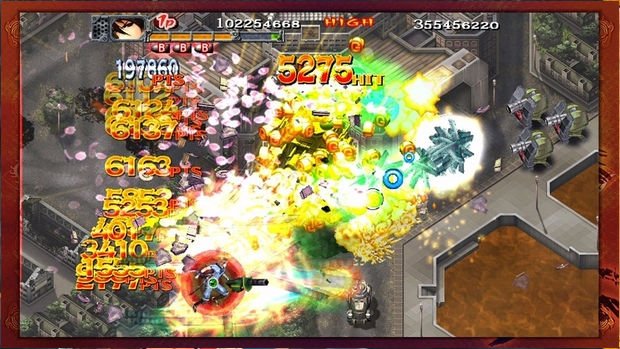 To make things even crazier, there is a drastic reinterpretation of the game within Slash mode. Along with some minor changes to balance, this mode overhauls your spirit form and greatly increases the amount of energy and gold available. Instead of bouncing bullets around your ship, you are always vulnerable in Slash. The trade-off is that you have new super powerful ways to attack. By defeating enemies with rapid fire shots, you gain steel orbs (exclusive to this mode).

These fill up a meter around your ship. When you enter spirit form, you can send these orbs across the screen for a devastating attack. In addition to this, you can also gain giant katanas by defeating enemies in spirit form. When you cancel out of spirit form, these will go flying across the screen giving you giant gold medals you need to race to collect. It’s absolutely insane when you pull it off. This is the mode I spent the most time with because the constant tension-and-release of these abilities adds so much to the game.

While AK is one of my favorite Cave games mechanically, it falters in its presentation. After suffering backlash from Deathsmiles II’s jump to polygonal graphics, Cave went back to their signature sprite work with this release (originally distributed to arcades in 2010). Even though there are similarities to the original Deathsmiles, AK has a rough, uninspired look to it. Beyond the colorful character art, everything in this game has a bland industrial look. 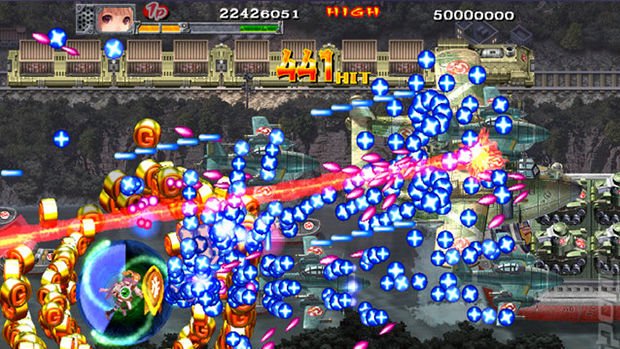 Many Cave games covered the same ground, such as the similarly industrial world of Progear, but they did it with a sense of charm, style, and detail that AK lacks. That’s not to say the game is ugly. The real eye candy comes from the bullets and surreal swarm of gold pieces circling your ship. Perhaps the dullness of the backgrounds and models is out of necessity but it still makes the game feel a bit lacking in presentation. As for the music, it’s a major step back for the developer. Feels like they unarchived some old mid-’90s butt rawk in place of something more interesting.

Rising Star Games has done an admirable job in packaging the game. The menus are clean, visually pleasing, and easy to navigate — something that can’t be said about most Cave home console releases. The game still has its rough spots, though. The tutorial videos are hidden (need to press “B” in menu), there is no boss training option (a serious blow for 1cc-seekers), and no way to quickly scrub through replay videos (the fast-forward option is pretty slow).

The majority of people may look at Akai Katana from a distance, wondering if the slowdown is intentional (yes) or if a 1cc on Novice counts (no) or if this is a good starting point for a Cave newbie (maybe?) For fans of the genre and developer, Akai Katana is going to be one of the best times you’ll have with a game this year. For everyone else, you may just find yourself ascending to bullet hell heaven if you dedicate some time to learning the game’s obscure but absolutely thrilling mechanics.