Fight for your Right

Last week, my birthday took me one step closer to 40, more than late enough in the day to consider myself middle-aged. That’s halfway toward 80. Ergo, it’s more than possible I’m halfway through my personal turn on this mortal coil, and although I was sure for decades that I’d have “worked my life out by now,” the honest truth is that I haven’t, not really.

I’m very happy for my continued highs but I’m still held prisoner by memories of the lows. There’s times I know I should’ve turned left when I turned right, projects I should’ve pursued much earlier, and opportunities missed that I’ll never get again. But that’s part of life. The richest person in the world can’t wind the clock forward or backward to change the past or secure the future. We can all only do what we choose to in the here and now. Face challenges, or run from them. Ignore the chances, or take them. Live safe, or take risks. All of which leads to the ultimate concept of mastering your own future. You can’t predict who or what you’ll be, but you can always take active steps toward or away from personal fate, which is half chance anyway.

Afterparty, the latest release from Oxenfree‘s Night School Studio, has its own questions about some of these themes, which feature in a bizarre tale of two young friends, their premature deaths, and a crazy drinking contest held in the inner circle of hell. How did Milo and Lola end up on the wrong side of the pearly gates? And is it ever too late to get a second chance? Open a bar tab and let’s find out. 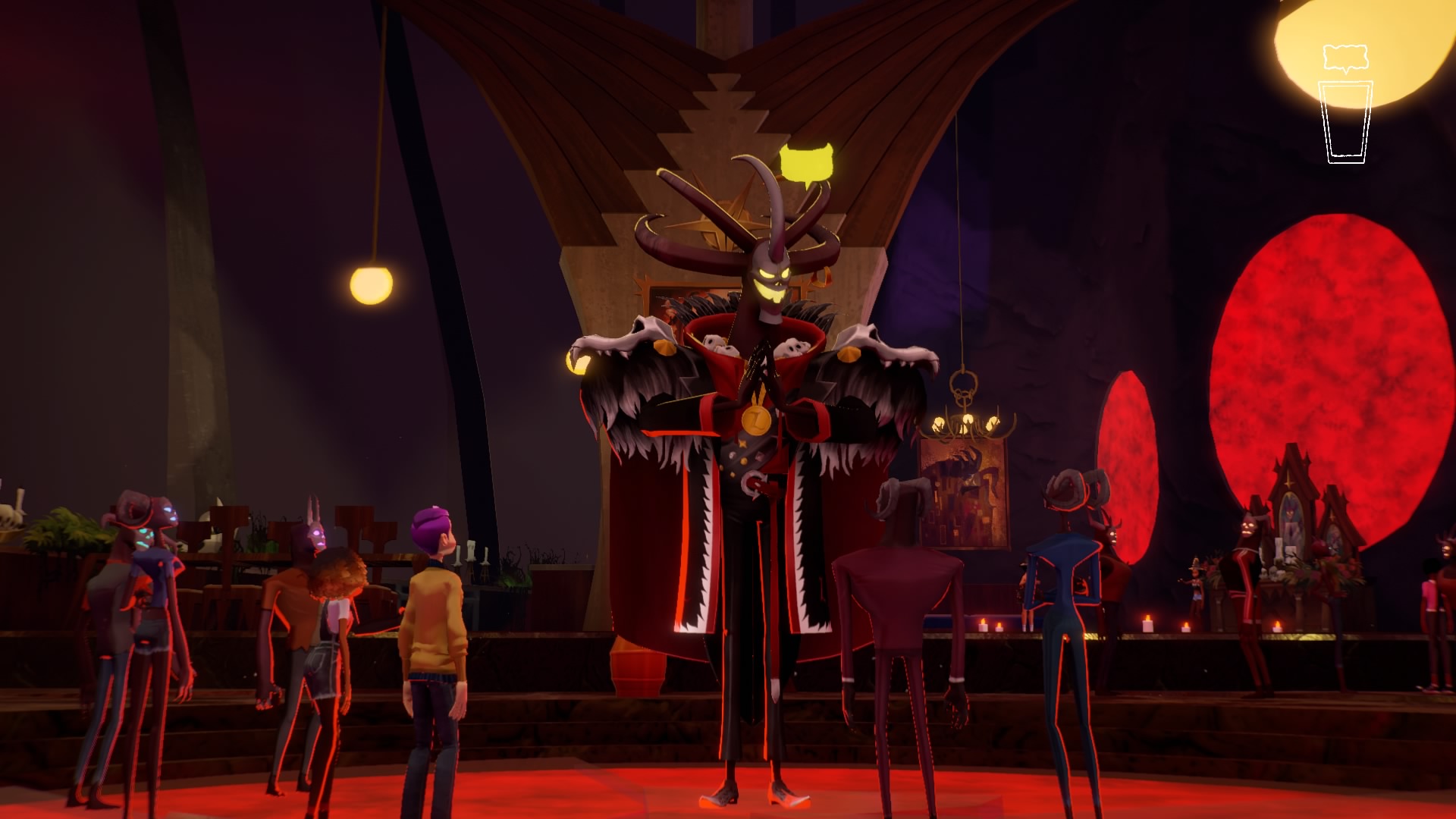 Afterparty is the story of best-friends-since-kindergarten Lola Woolfe and Sang “Milo” Bong, who find their college graduation party rudely interrupted by an outbreak of death, followed by a swift journey to hell. This comes as a surprise to the slightly acerbic pairing, who were totally unaware not only of their own passing, but also the misdeeds that have led them to the underworld, where they are being set up for a future of eternal torture.

Fortuitously, Milo and Lola popped their clogs right before the end of the working day, and so will not be processed for everlasting torment until the following morning. Given one last evening to explore the nightlife of the beyond, our heroes learn that there may be a way out of this unholy predicament. Every single night the big man himself, Satan, holds a wild party at his opulent mansion, and if you can outparty the Prince of Darkness, then you can return to the land of the living. Seeing as the night is still young, and not particularly pleased with their premature demise, Milo and Lola form an improv plan to gain access to Satan’s soiree, out-drink the man of the hour, and return to this so-called life.

In Afterparty, players alternate control of Milo and Lola as they attempt to find their way back to humanity. As the wry tale unfolds, players guide the heroes through the underworld and its many nightspots, chatting with locals, helping out demons and the damned, playing bar games, and drinking, drinking, drinking. The latter is an important mechanic in Afterparty, as each poison alters Milo or Lola’s personality, offering up dialogue choices that would not be available otherwise. The aim is to select the best drink for the given situation, using the characters’ newly-found liquid courage to gain favour with those that can help our heroes progress to the next level of social importance (while also improving their pub-crawling skills for the final showdown with Satan).

It cannot be stressed enough that Afterparty is a narrative-heavy game. Aside from the actual movement of characters and a handful of skill-based party games (such as dancing, Beer Pong, and Shot Stacking), the majority of Afterparty consists of walking around locations and engaging in dialogue trees. As such, it often feels like you’re more just constantly pushing the characters through extended cutscenes, rather than having any strict agency over the gameplay. Think of it as a LucasArts point-and-click adventure, but without the item puzzles. The core of Afterparty is character interaction. This isn’t automatically a negative, but players should be aware that Afterparty mostly boils down to sauntering around environments, downing booze, and talking to the weird denizens of the underworld.

So it’s fortunate that Afterparty is (mostly) successful in its delivery of narrative and character. Absolutely packed to the brim with dialogue, very rarely does time pass without conversation, which keeps the story and atmosphere feeling “alive” (no pun intended) and the characters at the forefront of the action. The dialogue is refreshingly fearless, featuring some of the most creatively colourful language gaming has seen in some time. A universally excellent job is done by the cast, all of whom succeed in making the main players engaging, likable, and – of vital importance – relatable. Janina Gavankar and Khoi Dai are excellent as our heroes, whose shoulder-shrugging self-reflection brings to mind the characters of Gen X classics such as Daria. The whole show is almost entirely stolen by Ashly Burch as underworld cabbie Sam and Dave Fennoy, who excels as a worryingly accommodating Satan.

The script itself, however, is a little more uneven. Speaking in broad terms to avoid spoilers, Afterparty is essentially a tragi-comedy, which takes a wry-eyed look at a number of fairly heavy themes. Maturity, self-worth, familial relationships, confidence, friendship, identity, social media, dreams (both achieved and broken), and other topics are approached in an optimistic but world-weary manner. Our cast’s stories blend straight drama with a sighing “Whaddya gonna do?” black humour, as opposed to the sometimes saccharine ways these topics are handled. Afterparty does a good job at spotlighting its themes, but doesn’t always have succinct points to make about them. In keeping with this hit-and-miss ratio, the comedy falls flat on occasion, though I found a good chunk of laugh-out-loud moments throughout.

Story is the crux of Afterparty, and for the most part it’s great. Events sag briefly in the center of the six-to-seven-hour journey, but the narrative picks up for a surprisingly pragmatic conclusion, which is refreshing in an era swamped with “Everything’s all tied up with a bow” epilogues. Ultimately, Afterparty succeeds in part at delivering thought-provoking messages on the fragility of life, the hand you’re dealt, and how you choose to play it. And even when the story stumbles, the great characters and bizarre situations help to carry the slack. 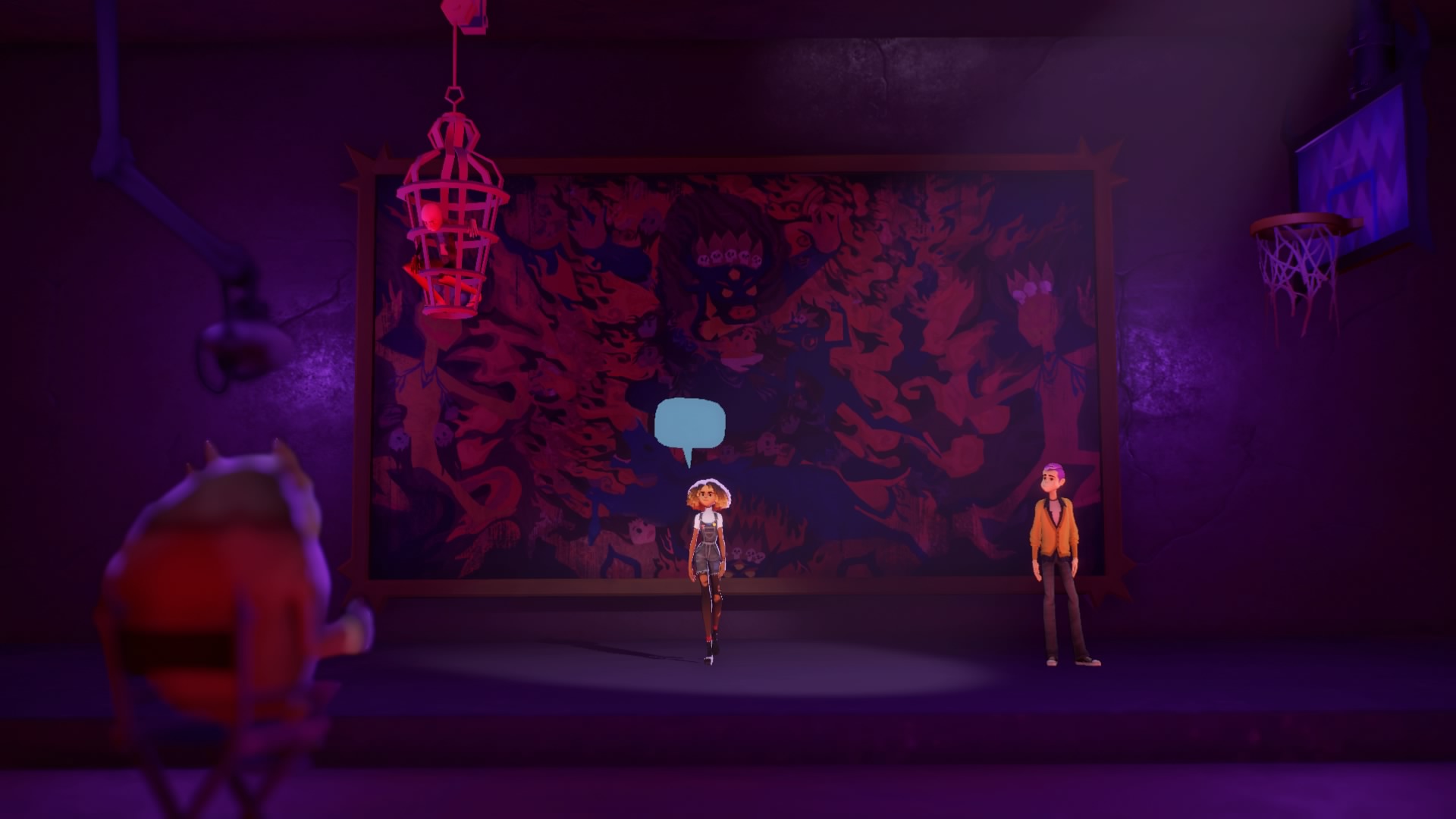 From an aesthetic standpoint, Afterparty is one of my favourite games of the year. Hell, essentially a darker, neon-lit reflection of any inner city, is a vulgar and lurid sight, but remains weirdly familiar to anyone who’s hit the town on a bank holiday weekend, stumbling through the masses, all trying desperately to escape the trappings of their own working week. When not living it up out on the town, we do see more traditional visions of hell as represented by ancient works – the sports bars and grimy motels replaced by dank caverns, lakes of brimstone, and festering corpses. Essentially, Night School Studio does a great job of blending the image of hell as a place of eternal damnation with the atmosphere of post-evening Spring Break.

Afterparty also surprises with inventive ideas such as rotating rooms, staircases that form out of nowhere, and – the literal incarnation of hell on earth – admin departments. Presentation, from the first scene to the last, often shakes itself up with creative and imaginative use of perspective and parallel plains. While Afterparty operates in a standard 2D world, it frequently offers up inspired ways of adding depth and scale to its environments.

Unfortunately, one of the big problems with Afterparty lies in its particularly clunky performance. The PS4 edition reviewed here had frequent stuttering and frame-rate issues during many of its busier sequences. Just jogging through large locales can see the game stutter up to a full second, and the exposition-filled rides in Sam’s cab chug along with great difficulty. There are also some AI path-finding issues, with characters in your party sometimes getting a little lost while guiding you through the environment. Afterparty has received several patches since its initial launch, so hopefully these issues will be cleaned up soon, as currently they’re an undeniable distraction. 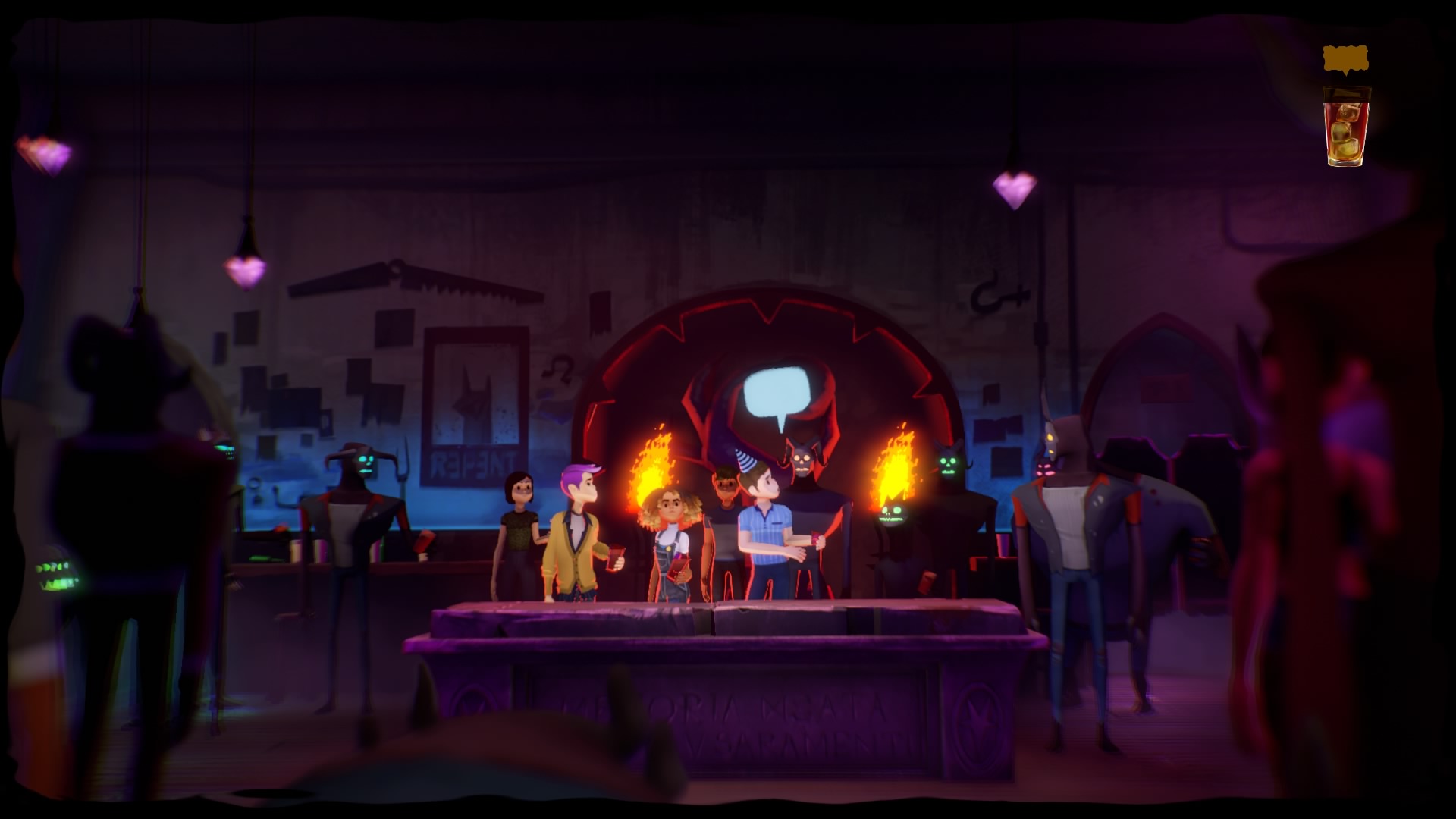 Afterparty is more a story to be experienced, rather than a game to be played. Fortunately, it’s a solid story with a unique concept, and packed with interesting and expertly-performed characters. Afterparty isn’t without its dramatic and comedic issues, but manages to hold it together during its few down periods with a great cast, wild visuals, and pumpin’ soundtrack. When the themes of this bizarre tale do click, there’s some legitimate introspection offered. It’s also refreshing to see said themes portrayed in a “Just do your best and be what you can be” light, rather than the starry-eyed “Don’t worry, everything’s always going to be amazing!”

Afterparty is a unique look at the people we are, the people we wish to be, and how the world, its occupants, and even ourselves can frequently screw with both. While as a video game it offers mostly persistent conversation, that conversation is excellently performed and smartly written. Despite undeniable narrative and technical shortcomings, Afterparty is a shindig worth turning up to, even if the invite seemed a little more promising.

[This review is based on a retail build of the game provided by the publisher. Former Destructoid writer Ashly Burch features in Afterparty. As always, no relationships are factored into review, and the reviewer did not previously work alongside Burch.]