Outside of Tropico 3 and 4, NinjaBee’s Keflings games are perhaps the best examples of how to bring strategy to the console’s control schemes. There are plenty of PC games that allow you to build a sprawling economy with little guys running to and fro, but sometimes you just want to do that from a lazy couch with your paws clutching a controller.

The new ‘It Came From Outer Space’ DLC for A World of Keflings adds a mini-campaign that offers a new world somewhat like the other three that featured in the main game. Except this time you manage a group of alien workers with some far out buildings. Alien Keflings? Why the hell not? 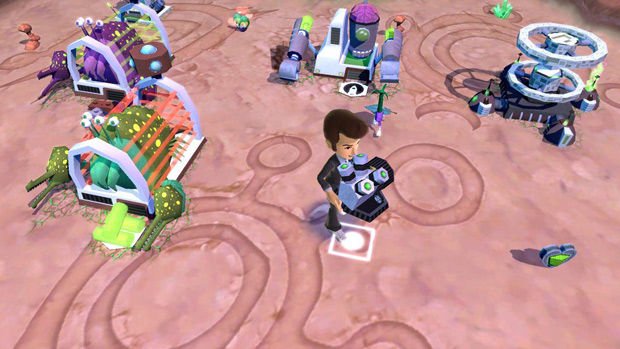 Three zany aliens from the planet Yurbut have crashed on the Kefling world inhabited by your Avatar and they are in need of help. You know what that means: pick up tiny workers and drop them on resources, then pick them up and drop them where you want the resource to go, and finally use those resources to create tile-shaped units to shape into buildings.

It’s the A World of Keflings gameplay that you know and love, with a few twists. The Alien workers’ heads get a different shape depending on the resource they harvest or transport, which makes it a lot easier to keep track of who is doing what. You can now build a different type of house that require a special “Robo Love” heart, which give you a fast-travelling and hard-working robot that goes “beep beep” and “beep beep boop.” It’s amazing. 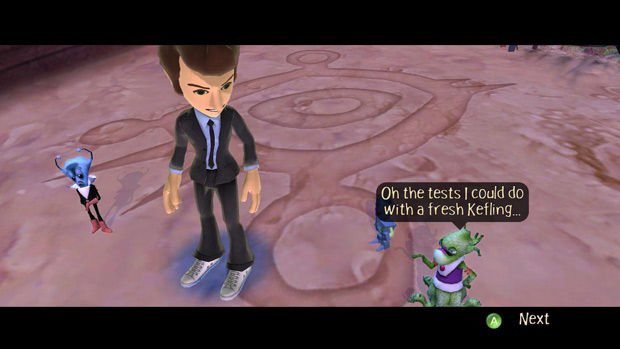 The new buildings are a visual variation on the buildings you are used to, for the most part, so you’ll still have that one building that creates basic construction units and an advanced building for the more advanced units you need for buildings further down the tech tree. Some of the refinery buildings are now giant alien lobsters, birds, and pandas caged in weird alien contraptions. These buildings can be altered by dropping a Metamorph Carrot on top of them — created in yet another building, of course — which makes them process harvestable resources into different resources than before.

However, it would have been nice if you would know what kind of resources this mutated version of the building requires and what it will produce if you mutate it. The first two of these buildings you’ll construct require the same resources for both the regular and metamorphed versions, so you expect the last one of its kind do to the same. Except it doesn’t, which may make you construct it where it won’t have quick access to the resources it needs. While it’s a bit annoying to not have that information, it isn’t a deal-breaker either as by that time you’ll inevitably have some building somewhere that has a bunch of excess resources you can use.

Contrary to NinjaBee’s last Kefling-esque game Akimi Village, the DLC sticks to the resource management system of A World of Keflings. That means resources are not magically shared between all production buildings and you still have to manually move resources around if you don’t adjust your transport lines to match your progress. It also means you’ll still have access to Doug and Scoops from the main game, who will pick up building units and follow you around, even constructing buildings themselves provided you’ve built it once before and placed the first unit where you want it. A new helper, Blorg the clayman, fits right into the cute ’50s scifi vibe that permeated the expansion. 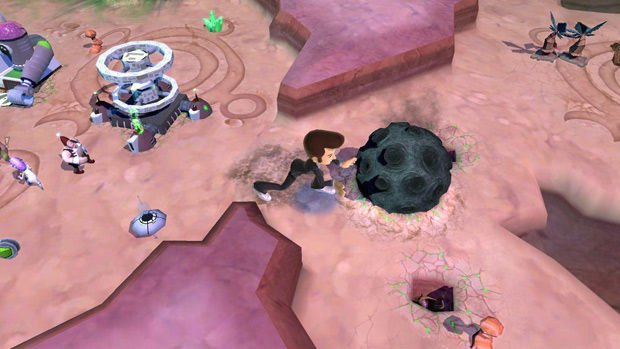 It Comes From Outer Space is a fun little diversion for the Keflings addict. It doesn’t add the largest of worlds you’ve seen, but it’s more Kefling fun with some bizarre new building aesthetics and the trademark humoristic dialogue. If you’re a veteran of A World of Keflings, A Kingdom for Keflings and Akimi Village, you can finish it in about two hours in full-efficiency mode. Playing it more casually and messing around a bit — or if you’ve forgotten how to play Keflings — will easily make you get some more playtime out of it. The new world is not very large, though, and the lack of something like a giant sandbox mode where you incorporate all of World‘s races into one giant kingdom feels like a missed opportunity to let players keep playing it forever.

NinjaBee has been messing around with ways to improve on the formula in Akimi Village, which omitted some of the features that were so useful in A World of Keflings, and this latest way of visually indicating the types of workers with different heads in the DLC seems like the best solution to the problem of worker clarity to date.

It Comes From Outer Space is not going to blow your mind with Kefling innovation. It’s simply more Keflings action and as such gives you what you expect; although it’s more enjoyable than the simple and lazy type of DLC NinjaBee could have given us. Like the original games, you will start it and then you will ignore whatever other task you were planning to do until you finish it — the essence of Keflings. It’s fun and cheap, but it’s still really only meant for those Kefling fans who want just a little more of A World of Keflings.