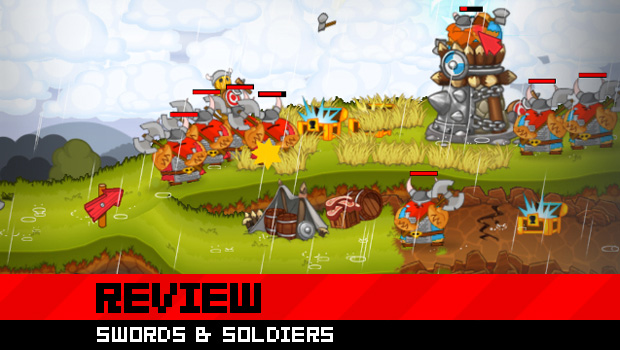 Swords & Soldiers came out for WiiWare last week and I had no idea it even existed (I should probably read Destructoid more often). Frankly, the idea of a 2D side-scrolling RTS was something that I had not even considered the possibility of. On reflection, I’m sure there are games which have attempted the formula before, but I don’t believe that I have ever played one.

All that changed for me this past week and I think I’m a better man for it. Of course, that could mean that I’m a better man in the way that torture training would improve my stamina and pain resistance. Or, perhaps the improvement could be more akin to finding inner peace through meditation.

So, which is it? Hit the jump for the review. 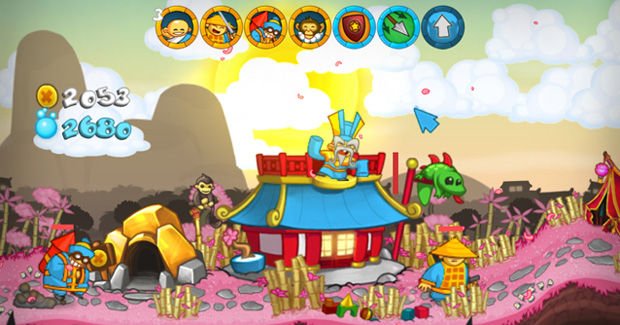 Swords & Soldiers has a few of the hallmarks of the real-time strategy genre but I don’t know if I could call it a true, honest-to-God RTS in the way many people think of this type of game. There is a resource to be collected by workers and troops to recruit. The game has upgrades to buy and special abilities for you to wield. That’s about as complex as things get, however. The only “building” you can construct are towers and there is not a huge amount of depth to the mechanics themselves.

Similarly, gameplay itself is simplistic. The control scheme is point-and-click and everything is managed by buttons on the top of the screen. They represent the various troop types you can buy and give you access to the upgrades menu. As you create new troop types, their icons slowly fill in on your control bar until they’re available. After purchasing a troop or using a spell, there is a delay before you can order another. Pretty straightforward.

What’s interesting is that you’ll never click on a troop to issue them commands. Every time you create a unit that is combat-capable, they go marching off to battle. There’s no way to instruct them to hold their position, they just launch headlong into the fray. It’s very low-key, as it takes out a lot of the maintenance requirements, but it can also be more nerve-wracking in its own way. The constant flow of foes marching in means constantly having to send your own units and the pressure of getting troops out quickly enough can be overwhelming at times. 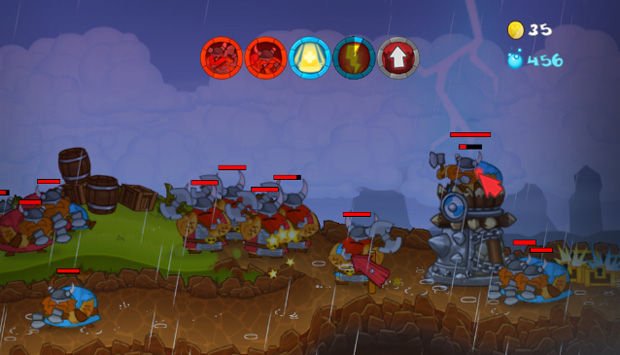 This turns Swords & Soldiers into something which almost resembles a rhythm game with RTS elements. Instead of timing button presses to onscreen arrows, you’re timing the release of the right troop types to contend with and overcome the opposing force. The idea takes some getting used to, but the game eases you into it very smoothly just as any RTS should. Larger levels are particularly tricky, as the distance between you and your opposition means thinking ahead a fair bit to make sure the right units arrive at their destination at the proper time.

While the troops are fighting it out, there are magical effects that can swing the tide of battle in either direction pretty quickly. Magic spells are unique to races and usually consist of a clearly offensive spell, a defensive spell and a third which varies a bit but can be quite potent when used effectively.

There is also a super move available for each force. In all circumstances, these expensive spells can damage massive amounts of troops on both sides of a battle. In the case of the Chinese and Aztecs, these special moves are presented as mini-games where you can time button presses to avoid killing your own troops. The Vikings just drop Thor’s hammer on the battlefield which, while awesome, is less fun to use.

What’s great is that it’s all very easy to use. I ran into a few problems with keeping my cursor onscreen, as pointing out of range would take the cursor completely off and it was a bit of a trick sometimes getting it to reappear, but that’s really the only issue I had. The icons are large enough to differentiate one from another while convenient enough to not take up a ton of real estate on the screen, making it easy to create units and cast spells.

It helps that the difficulty of the campaign is reasonably low. Even being a rather poor performer in the genre, I only struggled with the last couple of levels in each race’s story. A skirmish mode with three levels of AI difficulty proves to be a much greater challenge on the upper end. 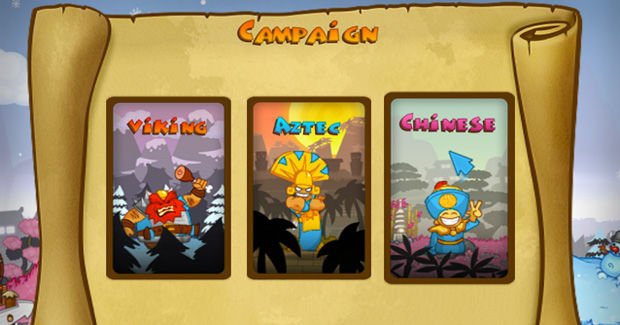 Each of the three armies in Swords & Soldiers have a different focus. Vikings seem to have heartier troops on the whole. Aztecs tend to have an advantage in sheer numbers, as their necromancers get to work on the corpses strewn throughout the battlefield. Lastly, the Chinese have a greater magic focus, with the ability to clone existing troops and towers that have no defenses but increase the rate of mana generation.

Along with the campaign and the aforementioned skirmish mode there are three unlockable challenge modes, local split-screen multiplayer and achievements goals you can work on. The challenges vary from being absurdly easy to staggeringly difficult. One of these features a lone Viking which you must keep alive as long as possible while he marches through an enemy-infested plain. It’s so difficult that I can’t even comprehend how to succeed in it.

The gameplay works well, but other elements of the game outshine it by far. The art direction and story are absolutely adorable and contribute to the fun factor in a major way. The story is fantastic too. All three armies are seeking to gain control of a humongous chili pepper for completely different reasons. Seriously, that’s the plot of the campaign. It’s cheerful and refreshing in a genre that tends to lean towards dark and gritty storylines. 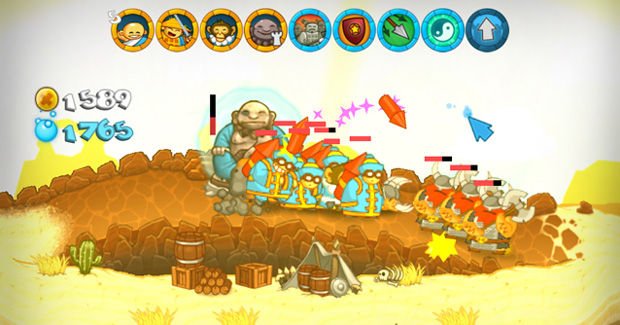 I had a great time going through the campaign mode, reading the ridiculous dialogue and watching the leader of my army bounce around at the top of their castle. I do not think that I would be likely to invest much more time into the game’s multiplayer mode than I already have, which could probably be attributed as much to the fact that it’s local-only as that the simplicity of the game feels like it would get old pretty quickly against human opponents.

And that’s okay. The campaign mode is plenty long enough for a WiiWare title with 30 levels that you can pick up and put down at leisure. In fact, I think it’s exactly the right amount of content — there’s just enough here to prevent you from getting sick of it. The charm that these campaigns contain is more than enough to carry you through. Beyond that, everything else should probably be looked on as an extra that you’ll try once and then forget about.

All said, Swords & Soldiers is a cute game with a lot of moments that are really, really fun. It can get pretty intense in later campaign levels and it’s satisfying to complete them. Replay value exists if you really want to participate in it, but this game could have released with just the campaign and been satisfactory. Long-time strategy fans will probably not care for its simplicity but people who have traditionally lacked the skill for more complex games should appreciate the fun factor and have a great time with it.

Score: 8 (8s are impressive efforts with a few noticeable problems holding them back. Won’t astound everyone, but is worth your time and cash.)