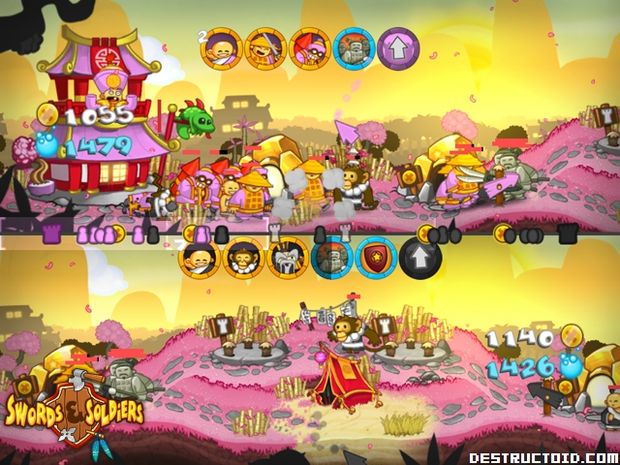 At GDC earlier this year, Ronimo Games’ Jasper Koenig ran up behind me and tapped me on the back.

After confirming that I was with Destructoid (the badge gave it away, I think), he started to pitch his game to me. He handed me a small, postcard with information about the game, which I immediately recognized as a WiiWare game I had heard a little bit about, Swords and Soldiers.

Jasper wanted to sit down and show me the game, but my already hectic schedule simply wouldn’t allow, despite my best efforts. I’m definitely kicking myself, though — Swords and Soldiers looks like it might be one of the most interesting WiiWare games to come from a small developer this year. An odd little thing, Sword and Soldiers is a side-scrolling real-time strategy game, with a clean and fresh art style that’s hard to ignore.

These new screens and video (after the jump) of the game’s Chinese faction have me kicking myself even harder for not going out of my way to sit down with Jasper at GDC.  The game’s already been submitted to the ESRB, and Ronimo are ironing out the last of the bugs, so we should see Swords and Soldiers soon enough. I simply can’t wait.

Ronimo Games reveals the third faction of Swords and Soldiers: the mighty Chinese.

UTRECHT, THE NETHERLANDS – April 22, 2009 – Just a few weeks before release of the game, the third faction of Swords and Soldiers, the Chinese is finally revealed!

At long last the veil of secrecy is lifted! Emerging as the third contender for world domination is the CHINESE EMPIRE! Ruled by their child emperor, the Chinese care little for Viking barbecue feasts, or Aztec Vegetable growing contests. The Child Emperor tasks his subjects with gathering the the most exquisite toys from the corners of the world. Of course this will lead the Chinese empire onto a collision course with the other two factions.

To introduce the first Chinese unit: The Rocketeer
Strapping giant firework rockets to your back might not seem like a brilliant idea, but the Rocketeers will do anything to satisfy their emperor’s appetite for new toys. Extremely volatile, the Rocketeers are always willing to deliver their beautifull but deadly payload to the opposition. As well as offering a ranged attack, Rocketeers deal damage with final breath, and always go out with a bang, giving the whole battlefield a festive glow!

To introduce the first Chinese spell: Arrow rain
The arrow is a very effective weapon in the Chinese arsenal. They are used to pick off single targets at a great distance. To confront the sturdy Vikings and the fast moving Aztecs, the Chinese have improved their arrows with some burning fire. So if you’re fighting the Chinese faction, you’d better hope the heavens don’t open. If they do, there’s a good chance you’re about to be showered with a barrage of flaming arrows.