Nintendo is still reeling from the Wii U, so its mission statement is a bit muddled right now. Is the Switch a replacement for the 3DS? Nintendo said it wasn’t for the Wii U, but then discontinued it mere weeks later. Let’s face it, the Switch is a massive gamble. It’s not as powerful as other consoles on the market, but it’s basically a Vita and mini-PS4 meshed into one, with a little Nintendo magic sprinkled on top.

Isolated from the hype I’ve tested out the system in the comfort of my own home for the past week. Although it isn’t as explosive and as game-changing as a lot of you think it is, I’ve been enjoying the simple freedom it provides — I just hope developers continue to tap into that with a steady stream of games. 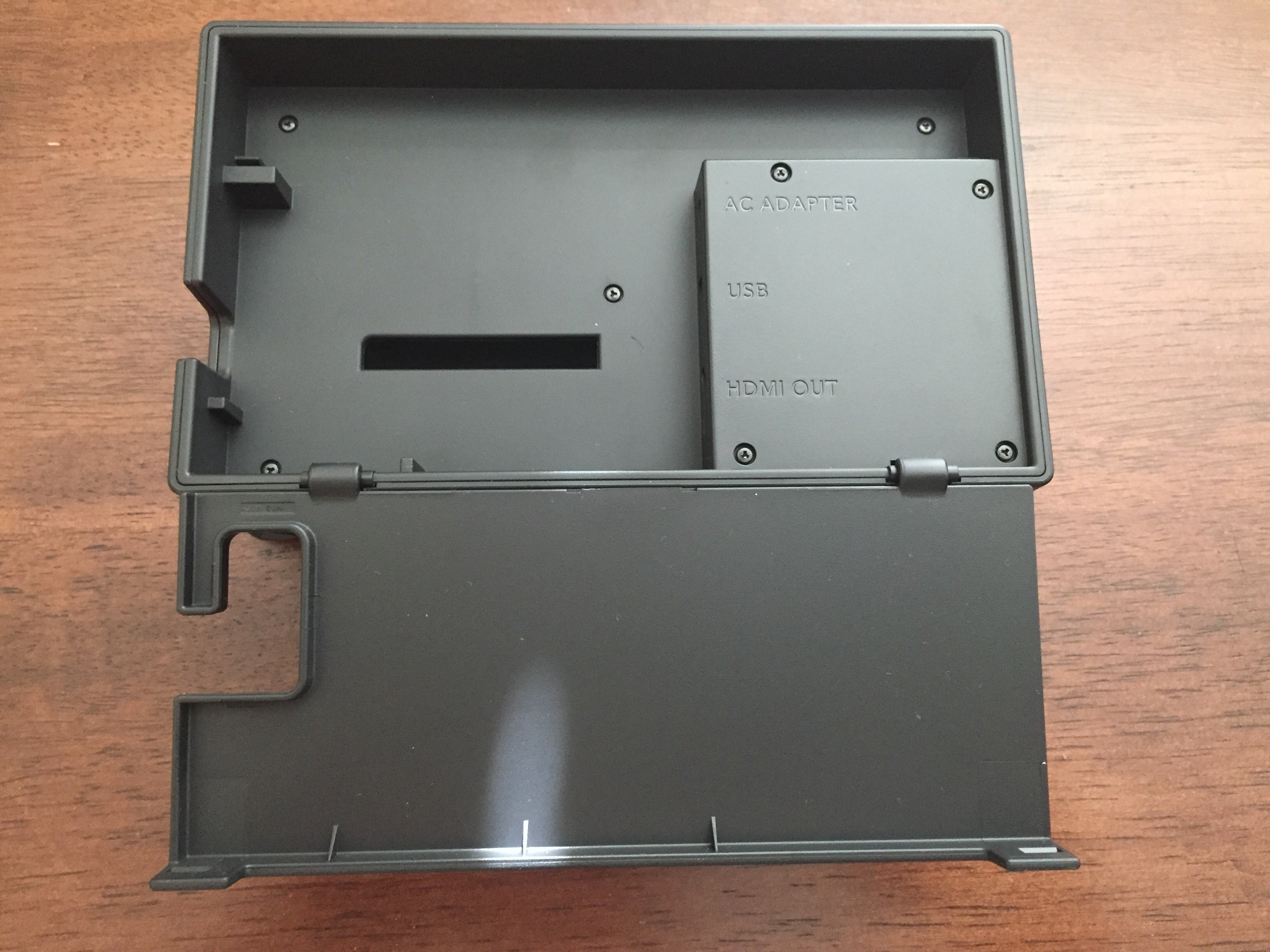 With its descriptive on-screen tutorial, it took me around 15 minutes, all told, to setup my Switch — and that includes creating a new Mii from scratch.

It’s crazy how muted this thing is as it’s completely innocuous on my TV stand, almost like it doesn’t exist (some guests didn’t even notice it until I told them I had one). The actual docking station (which is somehow $90 separately) is so basic — it’s a flimsy plastic box with cords for three USB (one internally and two on the side), an AC Adapter (the big kind, pictured above), and HDMI out. While I thought that I was going to have to write at length about the finer points of hooking this system up, it really is that easy.

It helps that right now, there isn’t a whole lot for me to do on it. There’s no eShop at the moment, for instance, or online connectivity of any kind. When the update does actually hit, there still won’t be much to do outside of game-related activities. It won’t have a browser at launch (or possibly ever), nor will it have any media channels like YouTube, Twitch, Netflix, or Hulu. No Bluetooth headset support might be a problem for some of you out there, and is a big missed opportunity from Nintendo to double-down on online multiplayer support.

For me, that’s totally fine. I have a ton of devices that can do that already, most of which are portable, and some even have a better screen than the Switch. But keep in mind that the share functionality is also limited to just screenshots — so streaming activity is still going to be limited to those who have capture cards or equipment for it. It’s not something I care about, but it seems like a missed opportunity for Nintendo given how big streaming is, and how easy it is to do it on Xbox One and PS4.

SanDisk provided us with a 200GB microSDXC card to test out on the Switch to expand its 25.9 GB of usable storage (thank God game carts don’t take up any space), but the system update that enables said microSD cards was not live at the time of this writing (go figure). We’ll be sure to cover how smooth the upgrade goes when we have access to the day-one update. As a note, it took me a little while to find where the card even goes — it’s right under the kickstand on the back of the tablet!

I miss the fun, whimsical music from the Wii and Wii U, but again, the idea here is no clutter. Menus move from option to option (news, eShop, album, controllers, settings, sleep mode) instantly, even if said choices are sparse. Several settings aren’t even available while hooked up to the TV (like brightness or airplane mode), and out of the box, it only sports a black or a white homescreen theme. It might be the cleanest OS I’ve tested, and I’m including the 3DS.

That’s due in part to how responsive the controllers (Joy-Con) are. By sliding them into the Switch tablet itself they’ll instantly be recognized (and “snap” into place with that trademark sound), and sliding them off and re-configuring them into a solo controller (with the included Joy-Con Grip) or as two separate remotes for multiplayer is as easy as sliding them into the Grip or turning them on their side respectively. You might not be able to fine-tune the console to your liking, but you aren’t going to be fighting it either — with one possible exception.

It’s important to be mindful that there are some reports of the Joy-Con de-syncing when the system is docked, but I have never had this happen, even once, in my over 60 hours of testing. We’ve reached out to Nintendo for comment and although the company said it’s “looking into it,” we’ll update you if we hear more. 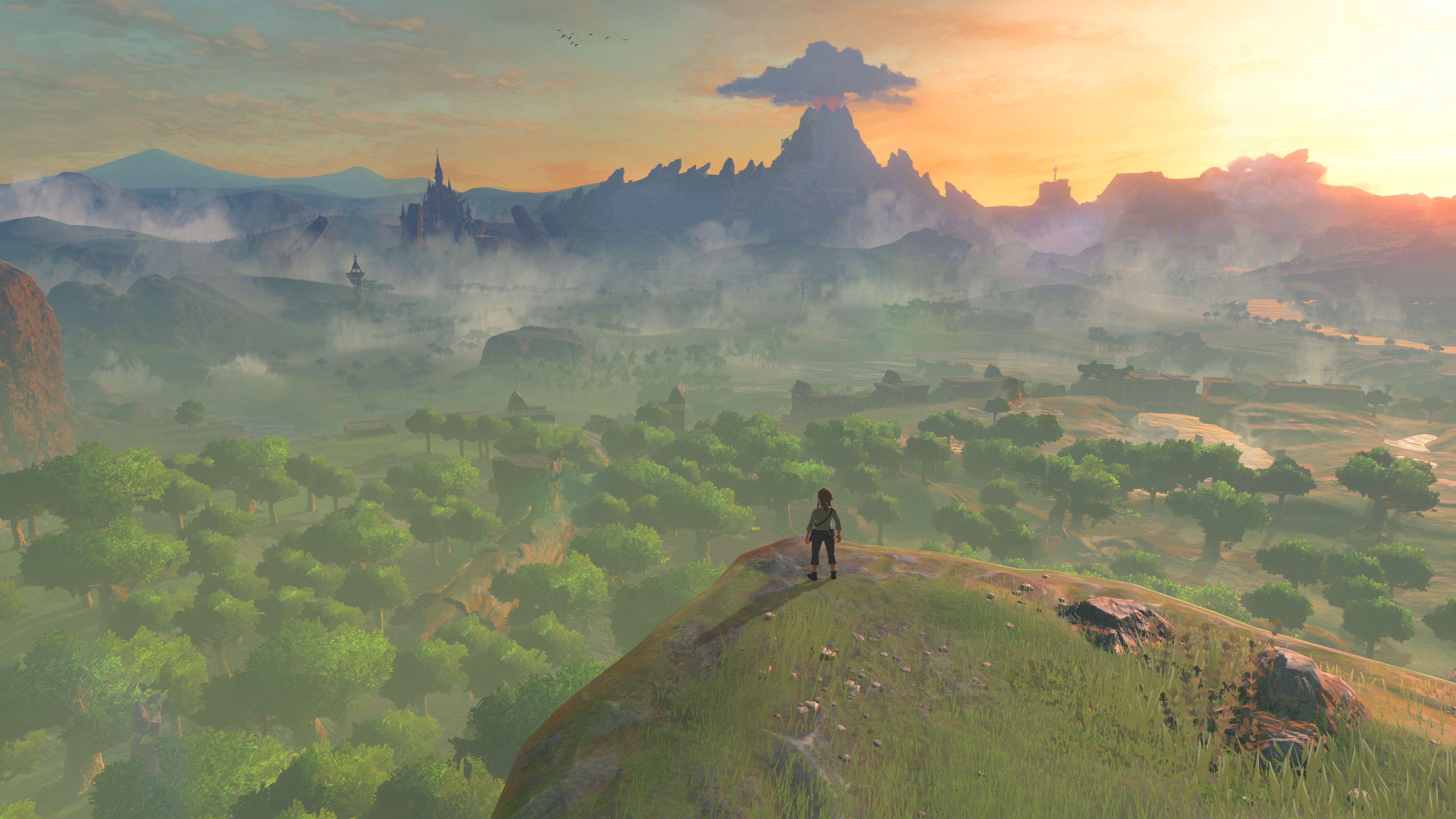 After clicking in the Switch to the dock, it typically takes a few seconds for it to display onto the TV. While this is mostly a foolproof affair, several times I didn’t snap it correctly into the dock’s connectors, forcing me to jiggle it into place again. It’s not a big deal, nor is the slight disconnect when you try to pull the Joy-Con off the tablet while it’s docked and it jiggles out of the connector, as the dock isn’t nearly as sturdy as you’d think (again, buying an extra is $90).

But once everything is good to go, you’re really good to go. I played 10-hour-or-more sessions with Zelda with no issues while the system was docked with the Joy-Con Grip, and the same goes for Super Bomberman R with the single Joy-Con (it also supports the Grip/two Joy-Con but I liked how different the single remote felt). One big plus is that if you’re playing something with friends, you aren’t always required to stop your session to create profiles — guest play is instant, just like a retro system.

Charging the remotes is effortless if you only have two, as they just snap right into the tablet after a session. The 20-hour charge claim for the Joy-Con has been accurate for me, as my pair of controllers never ran out of batteries during all of my tests. I just put them back into the dock with the tablet before bed, woke up, and was good all day. I surmise most of you will be fine with this arrangement as well.

If you are somehow going to be playing more than 20 hours at a time, note that the system does not include a Charging Grip — ergo, a Joy-Con Grip that provides power to the controllers — and Nintendo is asking people to pay $30 for that. Like many things that weren’t included, it seems like the perfect thing to provide to people in the box, though in this particular case it’s not nearly as much of a problem as I thought it would be. 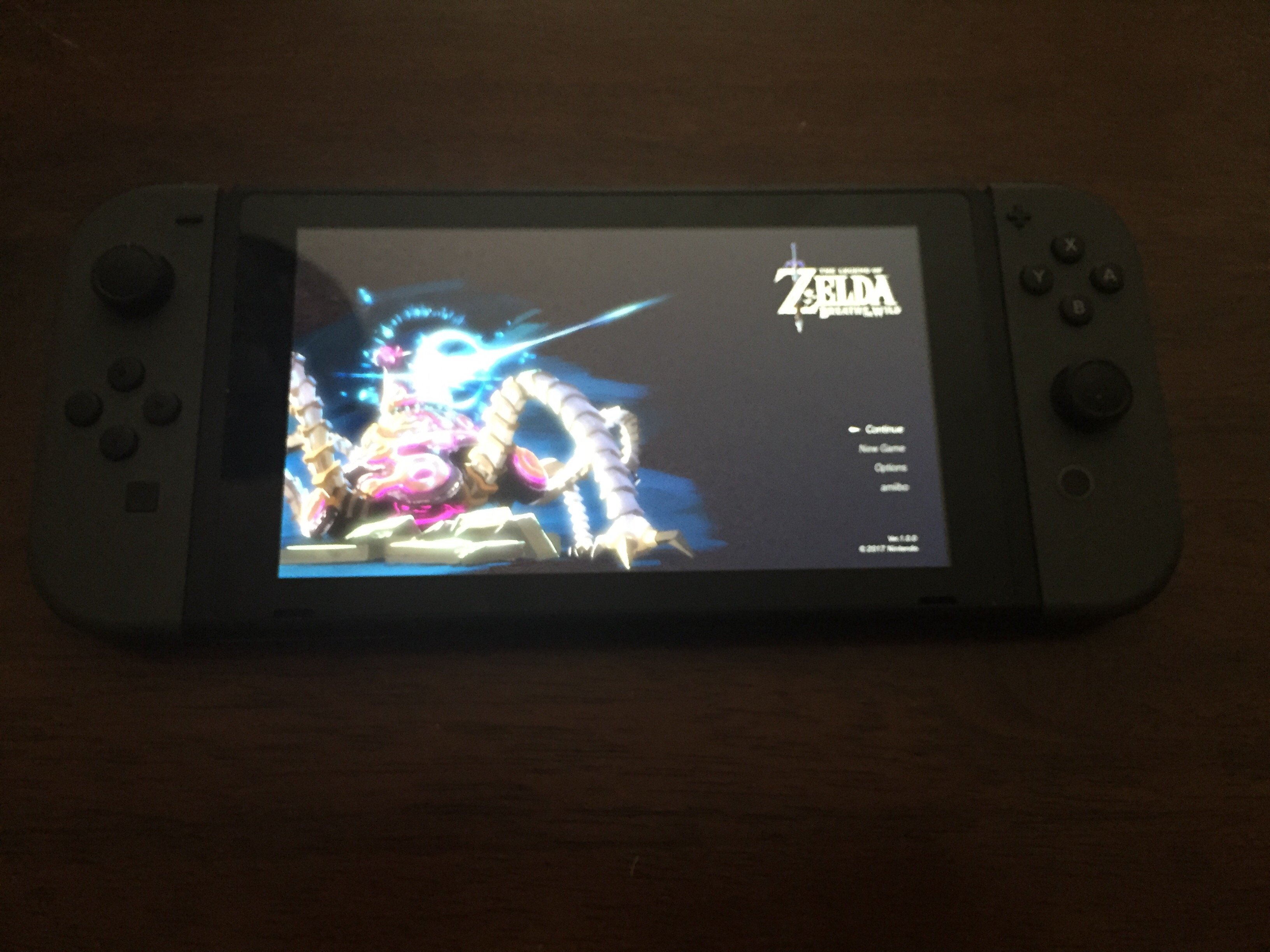 At first it was a strange feeling to go into my basement or upstairs without the tablet de-syncing like the Wii U GamePad.

Slowly but surely I tested each floor, every position (lying down, sitting), and even moved to playing it outside. If you’re worried that playing on the tablet somehow sacrifices the integrity of the game, don’t be. The fidelity of the screen (especially in the main menus, which are impressively sharp) is powerful enough where there isn’t any major noticeable difference between the TV mode.

There is a difference of course (Zelda is 900p docked, and 720p on the tablet), but it’s nothing to get up in arms about given how smooth the portable experience is. Any dropped frames on the tablet mostly matched up with dropped frames while playing in TV mode. The same goes for playing on the tablet with multiple people huddled around it — games like Mario Kart 8 Deluxe (which I was able to test at a Switch event several weeks ago) are even capable of running at 60 FPS in handheld mode.

Having said that, it’s disappointing that when the system is removed from the dock, there’s absolutely no signal on the TV. Now this was known practically since the beginning as the system is the tablet and the dock is just a signal booster, but in that way, it feels like a downgrade from the Wii U — if you’re mostly playing in your living room and aren’t going to use the Switch much on the go.

Take Zelda for example. Previous games used the Wii U GamePad as a touch screen map that you could use in tandem with playing on the TV, but on the Switch, it’s a “one or the other” situation. Right now very few Switch games are optimized for the touch screen (it’s basically Voez and Skylanders), which makes the tablet-only method of playing a little less impressive. 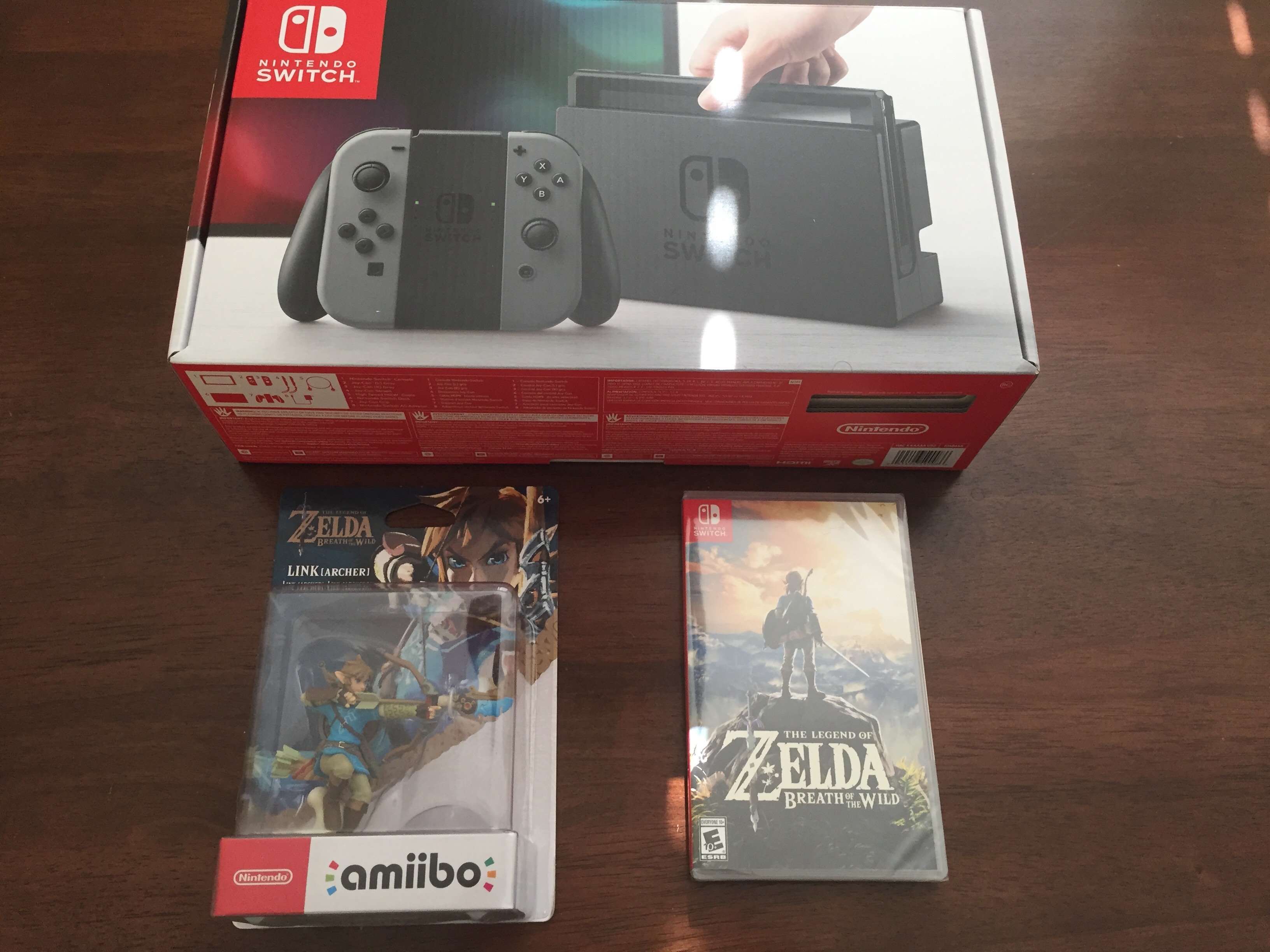 Should you buy one now?

For me, specifically referring to the launch, the Switch lacks a certain type of “wow factor” that I’ve had previously with Nintendo systems out of the box.

Take the Wii U: when my wife and I popped open that console, we showed off Nintendo Land to multiple groups of friends. Not only was it a fantastic pack-in, but it sold people on the Wii U and gaming in general, much like the free Wii Sports did before it. The idea of having one person use the GamePad to play was something entirely different, and just about everyone had four Wiimotes on hand for multiplayer.

But I’ve found that the Switch, especially right now, is mostly a solo affair. Its portable nature caters more towards playing by yourself on the go with the Joy-Con attached, and at the moment, its heavy-hitting multiplayer games are still waiting in the wings. It’s nigh inconceivable that 1-2 Switch isn’t a pack-in, as it would be a perfect lead-in for Mario Kart 8 Deluxe next month and Splatoon 2 later this summer.

For Nintendo, that gamble may yet pay off though. It has already built a large amount of hype behind the console, and is already pushing it twice as hard as it ever pushed the Wii U in its entire four-year-ish lifespan. Over time it’ll have a respectable library, the freedom it allows will facilitate new kinds of experiences, and the price of the controllers will drop.

While I would pick one up at launch, don’t feel bad if you’re waiting for the right time to do so.

[This review is based on a retail build of the hardware provided by the publisher. A Pro Controller was not provided. microSDXC card provided by SanDisk.]