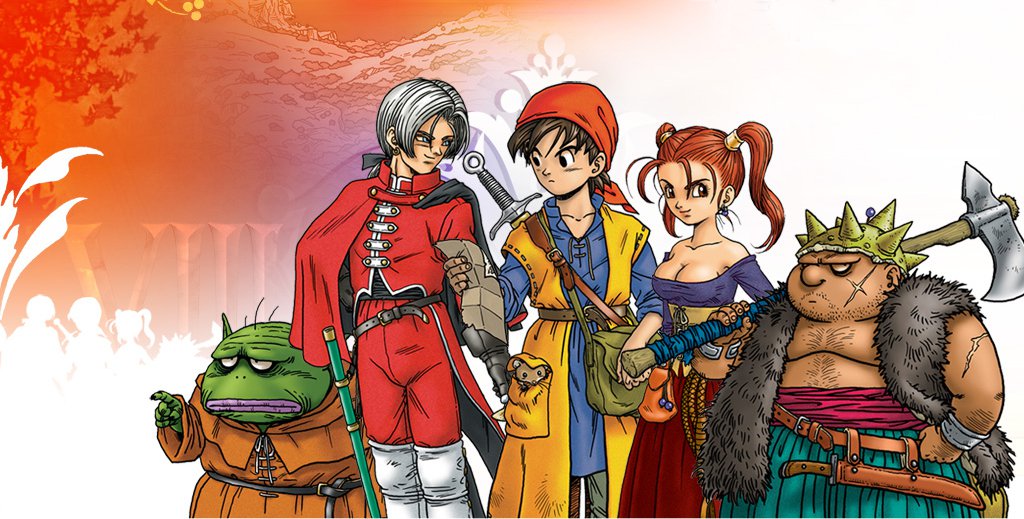 Sometimes, you get things right on the first try.

That’s the philosophy which has guided the Dragon Quest series for thirty years, and it’s hard to argue. The franchise has consistently been a top seller in Japan, and Dragon Quest games are known for their length and quality. They’re also known to be quite traditional, and combat is still handled from a turn-based, first-person perspective, just as it was on the NES. Despite all its success in its home country, the series has never made the transition to mass popularity in the West, though not for lack of trying.

Dragon Quest games tend to come late in a system’s life, and publisher Square Enix has always waited to see what the dominant console will be before committing the resources to put out a Dragon Quest title for that system. Dragon Quest VIII first came out at the tail end of the PlayStation 2’s life cycle, and it was a brilliant send-off, a lush, vibrant game with well-written characters and a story that has touches of genuine pathos. It’s a huge, meaty role-playing game, and just completing the main quest is said to take somewhere around 80 hours. There were several changes made in the transition to the 3DS, though, so how does DQVIII hold up on the newer hardware? 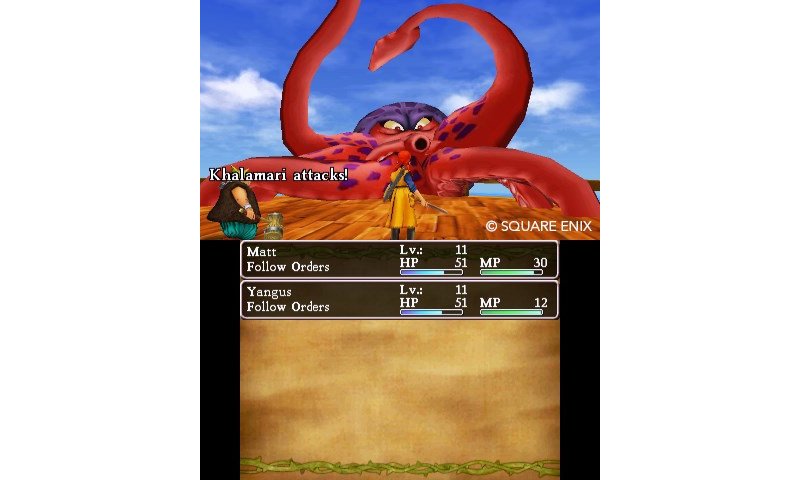 I love Dragon Quest games, but I have sort of a strange history with them. I played the original Dragon Warrior back on the NES after borrowing it from a friend who subscribed to Nintendo Power, but didn’t play another until Dragon Quest IX: Sentinels of the Starry Skies came out on the DS in 2010. When I did, though, I fell into that game hard. DQIX took full advantage of the DS’s communication features, and you could download new quests and items from Square Enix or set your game to sleep mode to exchange “treasure maps” with other players who had done the same thing, sort of a predecessor to StreetPass before the 3DS even launched. It’s by far my most-played game ever, and I put over 800 hours into it before moving on.

Since I rekindled my interest in Dragon Quest with IX, that means I skipped over VIII the first time it came around. I had picked up a copy several years ago on the advice of one Aaron Linde, but for some reason or another had never gotten around to playing it. So I was thrilled to see that DQVIII was heading to the 3DS. It’s my opinion that role-playing games work best on portable systems since you can do other things while you grind. Although DQVIII is very definitely a product of its time, I have to say it still holds up beautifully.

DQVIII has the subtitle Journey of the Cursed King, and you play as the retainer of King Trodain, a monarch cursed by the main villain, Dhoulmagus, to look like a stumpy, Yoda-like monster. His daughter the princess was similarly cursed to take the form of a horse, and changing these two back to normal is your primary goal. Along the way you meet several other characters whose lives Dhoulmagus has made worse, and they join your quest to help stop him.

The controls have been altered slightly to fit the 3DS, and they’re awkward, but serviceable. I’m playing on an older 3DS without the analog nub, so camera controls are mapped to the d-pad, and the camera can be rotated using the left and right shoulder buttons. New 3DS users can use the nub as a second analog stick to control the camera. DQVIII came from a time when RPGs were still fairly new to this whole “3D” business, and it can be a little awkward getting yourself oriented in the right direction. Speaking of 3D, it’s off by default most of the time, though for some reason the Battle Records and equipment screens can be displayed in 3D. 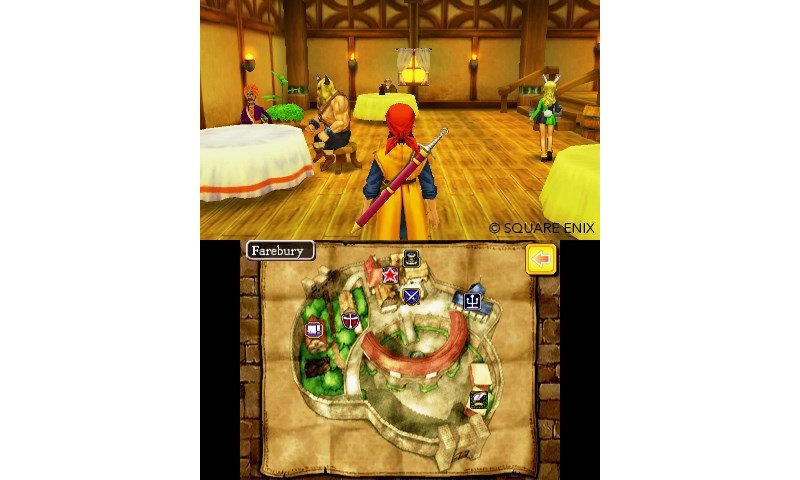 I’ve played about 23 hours of the story so far, and I’ve been struck by how mature the storytelling is. Not “Mature” because there’s lots of blood and boobs on-screen (though Jessica supplies the latter), but in the sense that actions have consequences. Although the playable characters can be resurrected at any church, death is permanent for everyone else, and it affects the lives of everyone it touches. Every character’s motivations are influenced by the death of someone important to them, either before the game starts or as a part of the story that’s being told. You’ll help Jessica come to terms with her brother’s death early on, and later she’ll use that experience to help the grieving king of Ascantha get over depression caused by his wife’s passing.

I loaded up my PS2 copy of DQVIII to see what had been changed, and for the most part the changes are positive. Some of the textures seem to have been improved, and it’s very noticeable when you compare the smoke rising from the first town you visit. The ability to speed up battles takes the sting out of grinding, and being able to see monsters on the world map makes hunting for a specific type much less of a chore. I’m a little annoyed that this version doesn’t have the gorgeous orchestrated soundtrack found in the PS2 release, but understand that space limitations and politics combined to keep it out of the North American release. The synthetic replacements are adequate, and it’s more important that the voice acting was preserved, in any case. I’ve met both of the new playable characters, but cannot yet recruit them to my party. The new dungeon challenge won’t unlock until I get further in the game, so I haven’t been able to test that out yet. Surprisingly, the new feature I’ve enjoyed most is the camera mode, which allows you to take slime selfies and share them via StreetPass. 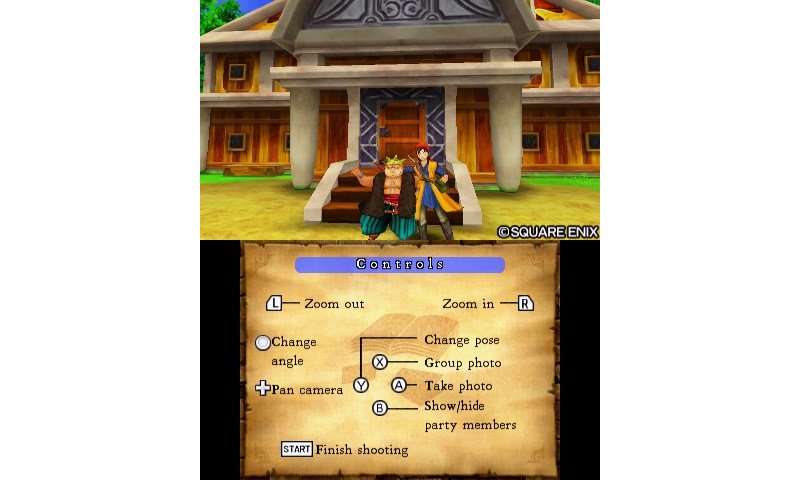 The camera mode allows you to take pictures in towns or in the field, and there’s a new series of challenges added that take advantage of this tool. Although the camera is available from the beginning of the game, you won’t have a use for it until you meet Cameron Obscura in Port Prospect. Once you do, he’ll challenge you to start taking pictures of points of interest, specific monster behaviors, or just to try and find the golden slime statues hidden in every town. If you meet his challenges he’ll give you something useful, and this can be a great way to get weapons and items you wouldn’t normally have access to until hours later.

There are a few issues that have been annoying, though they haven’t detracted from my enjoyment of DQVIII so far. Navigation on the world map works OK, but it can be difficult to judge whether you can run up a ledge or have to go all the way around to find an entry point. While I don’t personally have a problem with it, one of Jessica’s defining characteristics is her sexuality. If you put points into this statistic, she flaunts her curves to give the party an edge in battle, immobilizing monsters with lust. Hers is the only character model that changes based on the armor she has equipped, and she definitely shows off more skin than the male characters do. The game is a little slow to start, though I’d be inclined to be charitable and call it deliberate pacing. And while I consider myself a veteran of the Dragon Quest series, new players may have some trouble figuring out how things work. There’s not much in the way of an in-game tutorial, so players are left to figure out systems like Tension and Alchemy or even how the the day/night cycle affects gameplay on their own. If you don’t know how these work, the game will be much harder for you, so I’m a little surprised at the understated way in which they’re introduced. 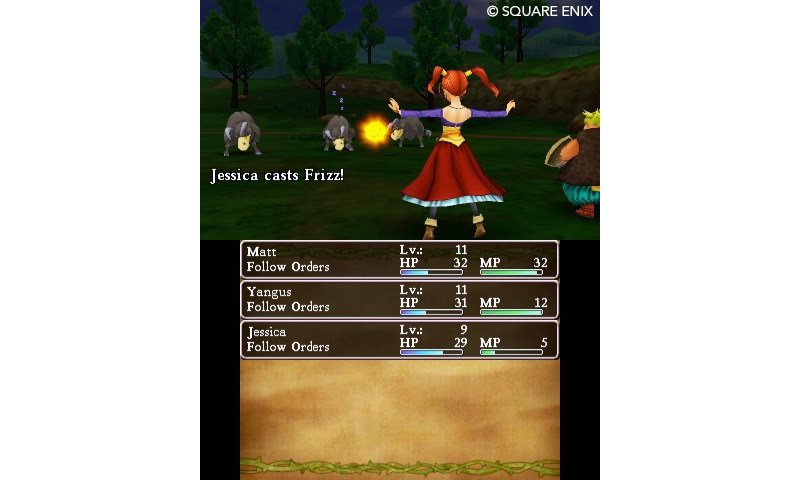 Overall, I’ve really enjoyed the time I’ve put into Dragon Quest VIII so far, and I can’t wait to get back to it. If you’ve played DQVIII before it’s well worth revisiting, and if you haven’t there’s no better time than now to give it a try. This game is a classic in every sense of the word, and I’m overjoyed that it’s available for a new generation to get their hands on. After the success of Dragon Quest Builders last year, maybe this will be what finally helps Dragon Quest become as big in the West as it is in Japan.