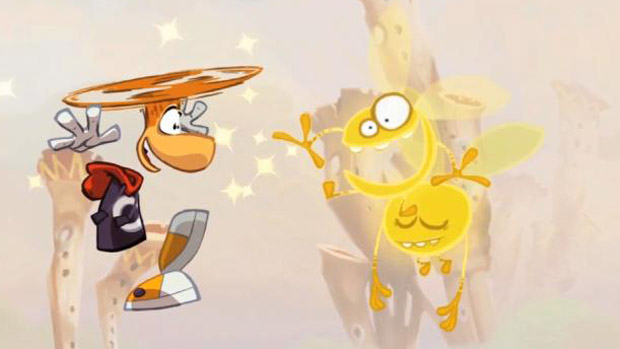 As you may already be aware, a demo for the 3DS version of Rayman Origins became available as part of today’s Nintendo eShop update. Ubisoft wanted to make sure that you found out, so they passed along this trailer.

The demo itself consists of three stages which offer a good overall sense of what the full game contains. There’s a traditional platforming stage with hidden areas to explore, as well as one of the forced scrolling platform levels. And, finally, one of the shoot-em-up mosquito stages appears to round out the pack.

I loved this game on Xbox 360 and this feels like a pretty good translation of the experience, albeit with cloudier visuals and less frames of animation. The 3D effects make the backgrounds look terrific, though, as there was plenty to work with in terms of creating a sense of depth already. Much as I enjoyed it, I have to confess to turning that effect off pretty fast, as my rapid and energetic pressing of buttons kept making the 3DS angle shift to make the image out of focus from my perspective.

My bigger issue is with the circle pad. You might as well forget it’s there and go straight for the Directional Pad. Sure, any self-respecting platform game player would have done that automatically, but some of us have a penchant for self-torment. That spongy thing feels absolutely useless for the level of precision I’m used to having in this game. The D-Pad is much better but I’m still struggling more than I expected I would. I’m not sure if it’s the game or my relative inexperience with the layout on the 3DS, but something is affecting my timing.

I suggest you give the demo a try before you decide if you’re going to shell out for this portable version of Rayman Origins. It appears to be a pretty solid port to the handheld — often no small feat, to be clear — but if you have the ability to play one of the other versions for console or Vita, I’d probably encourage you to go that route. If you have no other option, it’s still going to be a pretty great game, I suspect, but I think I’m likely to skip this release.