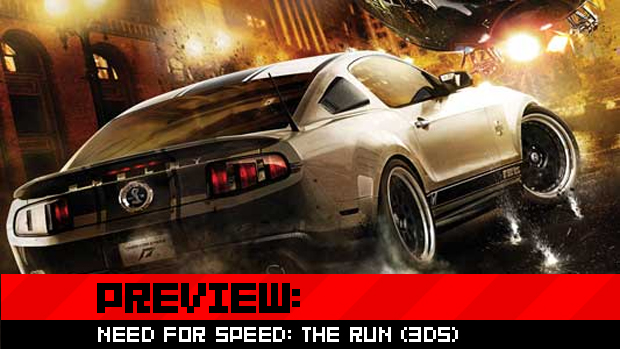 When Need For Speed: The Run was premiered at EA’s E3 Press Conference back in June, it made quite an impression on the press and series fans. The one feature to stick out was the inclusion of the on foot sequences, which was seen as a bit tad irreverent from fans.

But don’t worry, the 3DS version of the game focuses exclusively on the driving experience.

For the most part, it follows the same plot as the console releases of the game. You play as Jack, a street racer forced into a high-stakes cross-country race from San Francisco to New York. Along the way you’ll race through locations like Las Vegas and Chicago, while evading police and facing off against rivals who will use any means necessary to take you out. Spread over 5 acts, the game’s narrative is played out in animated cutscenes drawn by artists from Marvel and DC Comics, which are all fully voiced.

Being the first Need For Speed game that uses real locations, players will race across locations that will undoubtedly feel familiar to them. Featuring tracks that are loosely based off of actual city streets and highways, the game features over 20 different races from a variety of cities across the country. Visually, the game looks quite sharp overall. The game keeps a solid frame rate throughout, and the locations you’ll race through look stunning on the 3DS. However, what impressed me the most was the real time GPS map interface on the bottom screen. With full animation and all in real time, it’ll keep track of you and your rival drivers throughout the events.

After playing through two different races types, I really noticed how tight the controls are. With limited use of the touch screen, the driving controls are primarily on the shoulder and face buttons. L and R controls brake and acceleration respectively, and the face buttons control drift and boosting. The analog pad is surprisingly tight for making turns and controlling your vehicle. Which was a relief considering the amount of obstacles, such as evading drivers and performing takedowns against your rivals. Even when going at high speeds, the controls feel just as smooth. 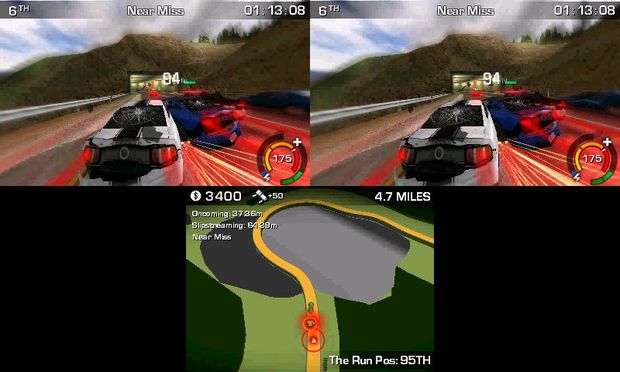 Occasionally during races and events, the game will attempt to switch things up by throwing unique challenges your way. Some rival drivers during races will resort to dirty tricks, such as pulling out firearms, to throw you off your driving game. When this happens, the game will switch over to a short sequence where you have to swerve and weave using the analog pad to get out of the line of fire. Succeed and you’ll get a boost to your boost gauge, but fail, you’ll crash out and fall behind the other racers when you respawn.

Another sequence that changes things up is when you come across extremely tight turns. Prior to making the turn, the bottom half of the screen will display a prompt for you to trace the logo for a U-turn. While clever, this particular sequence came off as a bit odd. Even knowing about it before hand, I still felt like I was caught off guard, and it felt awkward having to move away from the face buttons to the touch pad. It’s made worse by the very small window of opportunity you have to initiate trace.

While I appreciate the attempts to switch things up, I felt that it took me out of the experience of being in a high-speed race. I couldn’t tell if there was a specific way to initiate these events during my playthrough, but what bothered me most is the jarring switch over. You’re in a race going over 100mph, then out of nowhere you switch over to the quasi-QTE sequence. Again, I appreciate the attempts to changes things up, but I feel that the execution could be better. 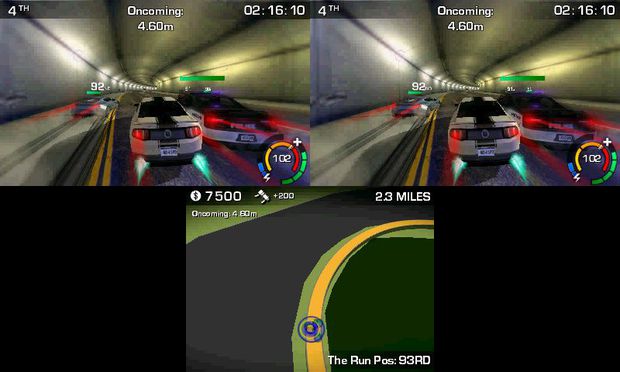 Overall, I really liked what I got my hands on. The game is loaded with content that’ll keep you playing even after the finishing the main story or just sticking with the standard race types. Not to mention with the inclusion of the Autolog system, you’ll be able to complete new challenges, compete on the leaderboards, increase in driver ranking, unlock new cars, and race against friends in local multiplayer.

To be released on Novemeber 15, Need For Speed: The Run looks to be another solid entry on the handheld side of the series. Plus, if you’re still put off by the on foot sections in the HD releases of the game, you’ll still at least have a version of the game that focuses purely on the driving.