Metro: Last Light is a direct sequel to Metro 2033, a game that developer 4A Games likes to refer to as a “flawed masterpiece.” The original game tended to be polarizing: people either raved about it, or couldn’t get past its glaring faults. The sequel looks to keep everything that fans loved about Metro 2033 and also improve on some of the well known complaints.

4A Games told us what they’re doing to make the experience better, and showed us an action-focused sequence from the upcoming post-apocalyptic survival shooter. 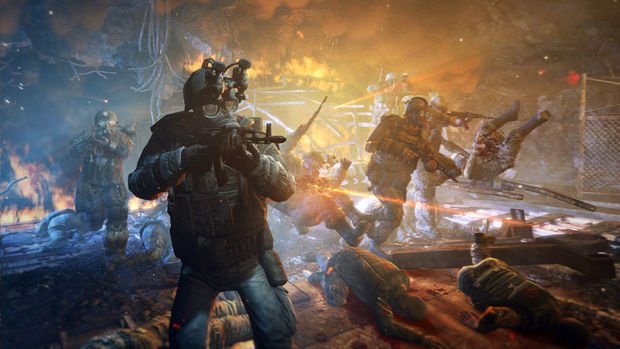 4A Games had a few broad goals driving the development of Last Light. First and foremost, they won’t be “Westernizing” or “dumbing down” the game. They intend to preserve the soul and spirit of Metro 2033‘s Eastern European perspective and appeal to cerebral players who enjoy its slow-paced experiences and investigative gameplay mechanics.

The developers are well aware of the first game’s issues, and have rebuilt the gameplay from the ground up to address them. Improvements include AI consistency, as well as weapon and combat systems. The tech behind 4A’s proprietary game engine has been overhauled, too — we can expect things like better dynamic lighting and dynamic destruction. 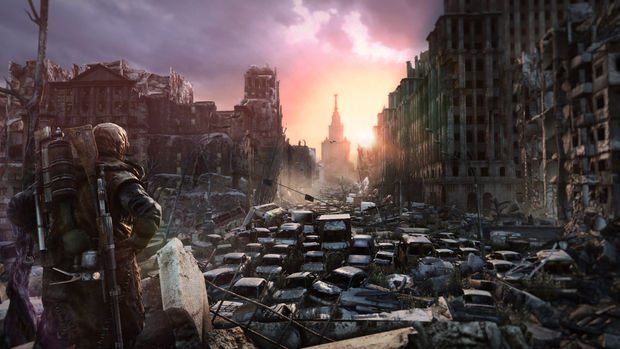 The Metro series is set in a post-apocalyptic future ravaged by nuclear war. Toxic air has forced Russian civilization underground into the Metro subway system in order to; mutants and other dangers lurk about as well.

Each station in the Metro world is considered an independent city-state, where trade and tensions occur between everyone — they all seek power. In the case of the demo THQ presented, the main character and his AI partner were infiltrating the Reich-controlled section of the Metro. Their objective was to rescue someone being held prisoner, the key to preventing an impending war within the Metro.

Lighting plays a big part in Metro, so the first couple of sections required the player to shoot out lights in the environment in order to hide in the shadows. Once enemy soldiers made their way past, the player would sneak up on enemies and silently take them out. 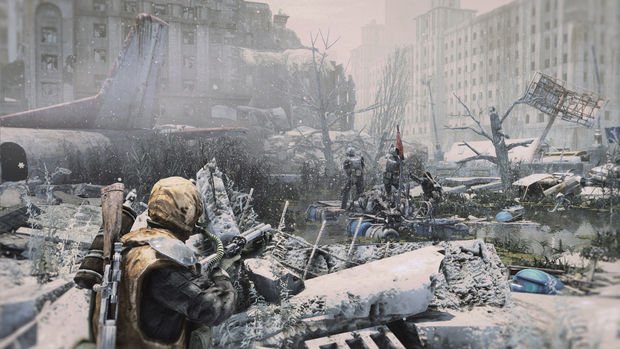 After a few more stealthy takedowns, the main character made his way to a guard outpost and took out a couple of waves of guards with his machine and chain guns. Once the area was cleared, the main character regrouped with his AI partner and was informed that the Reich are aware of your presence.

The two then headed towards the rail, where they hopped on a cart and pursued a train carrying the prisoner. The player took out enemies on the train before eventually jumping on-board to find and rescue the prisoner.

That was about it for the demo. 4A focused on an action-oriented sequence as they didn’t have enough time to show off anything more involved than the basic action. The sequence reminded me a lot of Call of Duty: Black Ops and the dynamic between main character Alex Mason and Viktor Reznov. The action looked good, but I definitely wish we were shown the other elements that make the Metro series unique and so loved by its fans.

Metro: Last Light will be playable at E3, so we’ll have more on the game at the show. Until then, we can at least tell you that Last Light will include a multiplayer mode; more details on that will be coming soon.