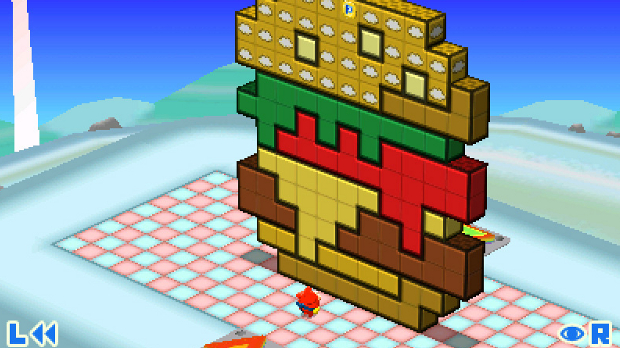 I was on the outside looking in during the Pushmo craze, still without a 3DS. While I could appreciate seeing Dtoiders recreate Jonathan Holmes’ face, I couldn’t explore its depths and intricacies — its well-worn crags of interminable wisdom — firsthand, much to my chagrin. After playing its sequel, Crashmo (or Fallblox, as it’s known in Europe), I was finally able to enjoy the adorable block manipulation firsthand.

The premise this time around is slightly less gallant than saving children. Papa Blox’s grand-niece, Poppy, has come for a visit. Poppy flies in on what looks like a run-of-the-mill, rainbow-patterned hot air balloon, except the balloon is actually a wooden frame upon which rows of rainbow-colored birds are perched. Boy, I bet their arms are tired. Mallo greets Poppy with an affable stomp, frightening the birds which scatter and all end up atop Papa Blox’s Crashmos. Without them, Poppy can’t get home, so it’s up to the chivalrous Mallo to scale these edifices and pluck each perched bird.

Blocks. Blocks have changed. As the Crashmo/Fallblox names imply, these blocks will come crashing down to earth if they aren’t supported by the other blocks in the puzzle. This changes up the block pulling and pushing dynamic greatly and opens up a whole new style of puzzling. Plus, Mallo looks adorable when he’s struggling under the weight of a block dropped on his head, using those tiny little arms in support.

Changing the position of pieces in all three dimensions (height and depth, that is) allows for more complex and creative solutions to puzzles; simultaneously, it’s a bit more mentally taxing on the player, as it opens up more possible incorrect moves. With that, it follows that there are going to be even more routes and maneuvers that you’re so sure are going to work even though they’re totally not going to work. In addition to pushing and pulling, Mallo can slide blocks left and right. Freer range of movement coupled with the new mechanic really opens up the board and I’m anticipating some mind-melting puzzles down the line.

I ran through the first set of tutorial puzzles, which felt a little overbearing and lengthy, though it does well to introduce you to some of the new maneuvers and methods you’ll be tasked to employ, similar to how the strategy-forming sheep in Catherine would give you new move ideas, though this is obviously more front loaded. After going through the tutorial levels, I ran through some of the first basic block levels, which were generally easy enough, with a few unique solutions here and there.

Par for the course, basically. The platforming element, which comes into play importantly when you’re actually climbing the blocks, felt good; I didn’t miss a single jump, anyway. On top of that, you’re given incredibly comprehensive camera control while you’re manipulating blocks. You can zoom in and out, have free reign over the camera angle in conjunction with the circle pad, change the stable viewing angle or viewing orientation (both of which are helpful in depth recognition in platforming and ensuring you don’t drop blocks you didn’t mean to drop), and so on.

From the first set of levels, I jumped towards the next smattering, which introduced the cloud blocks (denoted by the cute little clouds on them). Contrary to their colorful, but unmarked brethren, the cloud blocks do not require support to stay afloat and because they’re often well above Mallo’s head, I found myself having to move other tall blocks into the cloud blocks to rearrange them.

I’m hoping the game offers more instances of new, specialized blocks, like Pushmo’s warping manholes or other obstacles, to liven up the formula as you progress. The new block mechanics on their own offer a lot of additional possibilities, but it would be nice to occasionally spice up puzzles with some alien elements and trying to manage a lot of block types in concert could provide some truly challenging puzzles.

Crashmo is looking like a proper sequel rather than just another hundred puzzles working off of the existing formula. It’s taking the core elements of the well-received Pushmo and expanding them, literally, in all other possible directions, allowing for more creative and complex puzzle design. I’m a sucker for cutesy aesthetics and puzzle games, so this eShop title will definitely be one of the first I pick up whenever I finally get a 3DS.