Assassin’s Creed was one of my favorite games to come out in 2007. There, I’ll admit it.

Yes, some of the stuff was boring, and yes, I wasn’t able to finish the game due to my stolen Xbox 360 and the save file, but damn if that game didn’t offer exhilarating moments in an incredibly fascinating world. That’s why I’m so disappointed with the change from Altair’s Middle Eastern, Crusader’s era to Ezio’s Renaissance Italy in Assassin’s Creed II. Sure, Italy is cool, but there was something really fascinating and unexplored with Altair. Italy just seems blasé to me.

Assassin’s Creed: Bloodlines explores a little bit more into the life of Altair and the future’s Desmond as he discovers his lineage. Players who are looking forward to Assassin’s Creed II will certainly be interested in this game, if anything for the plot. I was told, however, that people who do not play this version will not be left out of important plot elements.

Let’s get down to the obvious issues they’ve had to deal with in making this a PSP game. First, the cities of the Middle East look like San Francisco in the Sunset district at five in the afternoon in August. That is to say it’s foggy. Like really, really foggy. While the console Assassin’s Creed has lovely draw distances and Mediterranean climates, this version comes off as cloudy. Don’t get me wrong, it still looks great for PSP title, but the obvious limits of the PSP are on full display in this area. 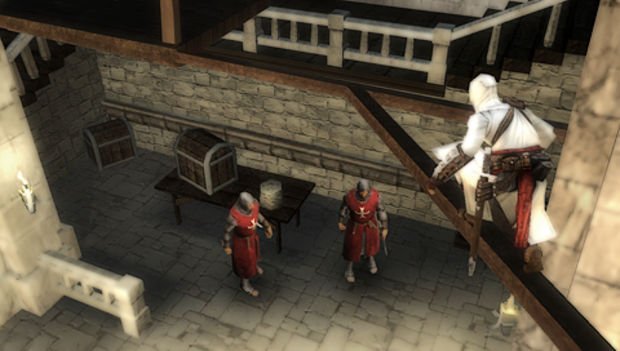 Another thing to mention is that this game is no longer the free-roaming experience of the originals. Levels look like they play out fairly linear, and entering a new area, the camera pans around showing the best way to get around. On a positive note, this reminds me very much of Prince of Persia: Sands of Time, which is a very good thing. I’m also reminded of PoP:SoT is the fact that you can no longer climb on every single notch sticking out of a wall; this time it’s very obvious that, yes, that brick is saying “climb me.”

Also, while the rep showing off the game wasn’t entirely clear on this (he didn’t know), it looks like actual sneaky assassinations are gone. Instead, there are more standard boss fights using the counter system of the original, which is almost entirely replicated in this game.

So now that I’ve mentioned everything that this game can’t do, what about what it can? Other than being a pretty damn good looking game (fog notwithstanding), the team has taken lessons from the original and mixed things up. Yeah, you’ll be killing bad guys, but you’ll also be tasked with doing other types of objectives. Also, say goodbye to random flag collecting. This time, there are collectibles, but they help boost Altair so there is some initiative to collecting them. 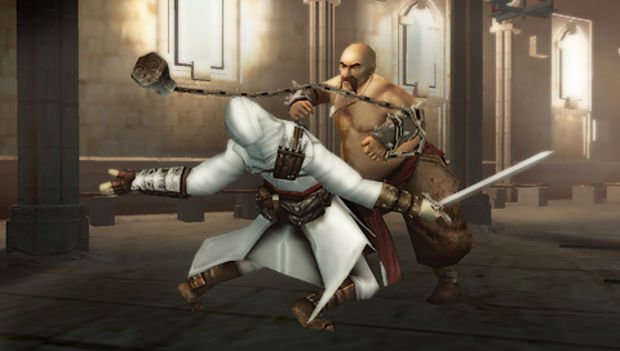 The “profile system” is still very much in place here, as well. Entering a new area, it’s obvious who you have to kill, as the amount of people on screen is quite a bit fewer than before. However, going up to a dude for an silent kill should be as satisfying as ever; should your cover be blown, there are plenty of ways to hide yourself. I’ve been told that the AI is a little bit more complex, which I supposed that means baddies will be a little harder or more interestingly to take down.

Another feature, which seems to be a growing trend amongst PSP/PlayStation 3 games is connectivity. Expect additional health and weaponry for Ezio in Assassin’s Creed II if you play through the PSP version.

I know I’m coming across as a little down on the game, but I want to make it clear that I’m saying these things because it looks like the team at Ubisoft Montreal are really working hard to push the limits of the PSP. Assassin’s Creed: Bloodlines is a game that really reminded me a lot of Prince of Persia, just from what I’ve seen and how the game appears much more linear, and I’m fine with that.

I love how the devs decided to keep the button commands on screen, so that as context changes for each button (and they all were changing frequently), it is easy to figure out what to do. It’s nice to see the team really trying hard, and I can respect that. Hopefully the game can be as solid as the original.

Look out for Assassin’s Creed: Bloodlines in November.