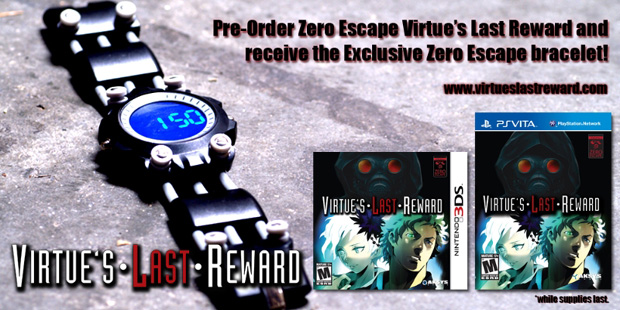 Those who pre-ordered 999: Nine Hours, Nine Persons, Nine Doors were treated to a very nifty gift: a replica of the bracelet that each character wore. Thankfully, while the in-game bracelets were shackling reminders of potentially imminent death, ours only told time.

Aksys has just announced that the sequel, Zero Escape: Virtue’s Last Reward, will likewise have a pre-order bonus watch, this time modeled after the black bracelets from the new adventure. This supply limited promotion is available for both the 3DS and Vita versions but only through Amazon. Considering how quickly the original game’s batch ran out, you might want to jump on this deal sooner rather than later.

Virtue’s Last Reward is still shooting for an October 23 release. You can bet that I’ll be reviewing this beast as I did its younger brother, and I’ll do it while wearing both watches. Like a boss.