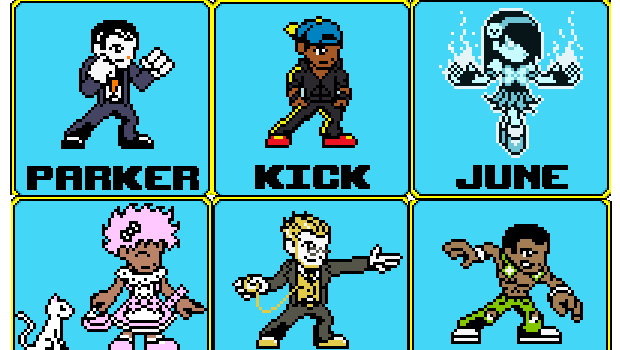 The Neo Geo Pocket Color was one of the many promising systems that tried (and failed) to share the handheld space with Nintendo back in the day. Those who gave the console a chance would discover a world of not-bad Metal Slug games and some of the best little fighters to ever hit a portable. The Last Blade, Fatal Fury: 1st Contact, and (most of all) SNK Vs. Capcom: Match of the Millennium offered simplified but deep 2D fighting experiences that were hard to put down. I played SNK VS. Capcom for countless hours, mastering combos and strategies while standing in awe of how a game with technically “bad” graphics could be so expressive and fun to look at.

The developers at Cardboard Robot seem to agree. They’ve used the sprites for those games as a base for their upcoming game Pocket Rumble (planned for PC, Mac, Linux, and maybe even 3DS). While the two mascots for the game, Tenchi and and Naomi, might look a little too much like old sprites. Naomi is basically Terry Bogard crossed with Leona Heidern, and Tenchi is like a male Sakura with… laser fire antlers? Whoa.

Each character builds meter in a different way, based on different fighting games. The list of titles that make up Pocket Rumble’s DNA is surprising. We’ve got Tenchi (Capcom style), Naomi (old KoF), Quinn (Bloody Wolf?), June (Pocket Fighter), Hector (Last Blade), Keiko (Guilty Gear/BlazBlue) and a lot more. Also surprising that almost half the game’s cast (including a boss appearance from Kick from Divekick) have brown skin. Has that ever happened in a fighting game before?

The game only has about $10K to go to meet its funding, but only 3 days to do it. If you don’t back it, you automatically forfeit your right to complain about the 3DS current lack of 2D fighters on the horizon.