We’ve reached the fifth anniversary of PlayStation VR, and Sony is celebrating by adding “bonus games” to the PlayStation Plus library in November, as well as revealing the top five most-played PS VR games since launch and highlighting some developer quotes.

About those bonus games: “Starting in November, PlayStation Plus members will get three PS VR bonus games for no extra charge.”

Sony will announce details “in the next few weeks,” so for now, we don’t know what the games will be or what kind of quality threshold to expect. Hidden gems? Best-sellers? No-names? The phrasing “starting in November” is curious, too. That could imply that the three bonuses are only the beginning of a bigger promo, or that we’re getting one bonus game per month and November is just the first month of that rollout. We’ll see!

There are a lot of PlayStation VR games that could be summed up as “PS Plus fodder,” and getting people more invested in this platform can only help the eventual PS5 VR headest, so here’s hoping for some generous picks. (It’s gotta be backward-compatible. Right?)

As for the most-played PS VR games, Sony took a look at global “playtime hours” from October 13, 2016 – August 31, 2021. Excluding The Playroom VR, which was pack-in software with the headset, these are the worldwide favorites:

According to Sony, other regional PS VR favorites across North America and Japan include Job Simulator, Firewall: Zero Hour, and Gran Turismo Sport. 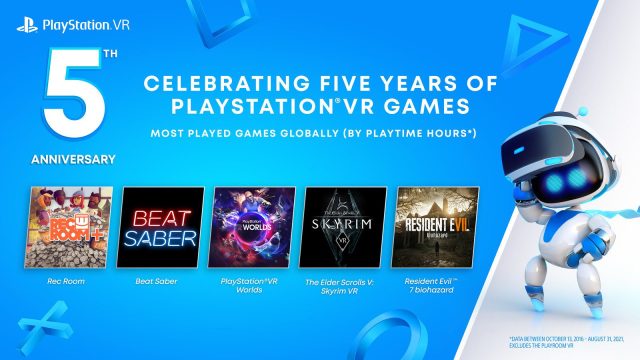 I remember meticulously going through the hit-or-miss launch lineup, sharing gems like Statik just to see how family members would react, teaming up in Keeping Talking and Nobody Explodes, and nervously exploring Resident Evil 7‘s Baker estate in VR — one of my favorite video game experiences of the decade — like it was yesterday. Was it all worth it? I have no real regrets. The high points made this platform worth owning.

In other ways, PS VR absolutely shows its age.

My patience for charging PlayStation Move controllers is at an all-time low, and that sentiment goes for setting up the headset in general. I don’t like having it “out” unless I’m actively playing something, and despite getting one of those PS5 adaptors, I rarely go out of my way for VR games these days unless they seem special — “more of the same” doesn’t cut it. My library of VR games is mostly locked in, and it’s collecting digital dust.

It’s hard to tell if Sony is gearing up to announce the next PlayStation VR model at the end of this year, or if that showcase will happen sometime in 2022 (or even later). It’s a tricky time to be launching new hardware. I sympathize with anyone who just wants to get ahold of a PS5 console, period, but I am ready for PS5 VR — assuming the software is there. Until then, new PS4 VR games, including Moss: Book II, are still on the way.

While it’s a slightly risky idea with three unknown free games coming in the near future, a number of PS VR titles are really cheap right now on the PlayStation Store.