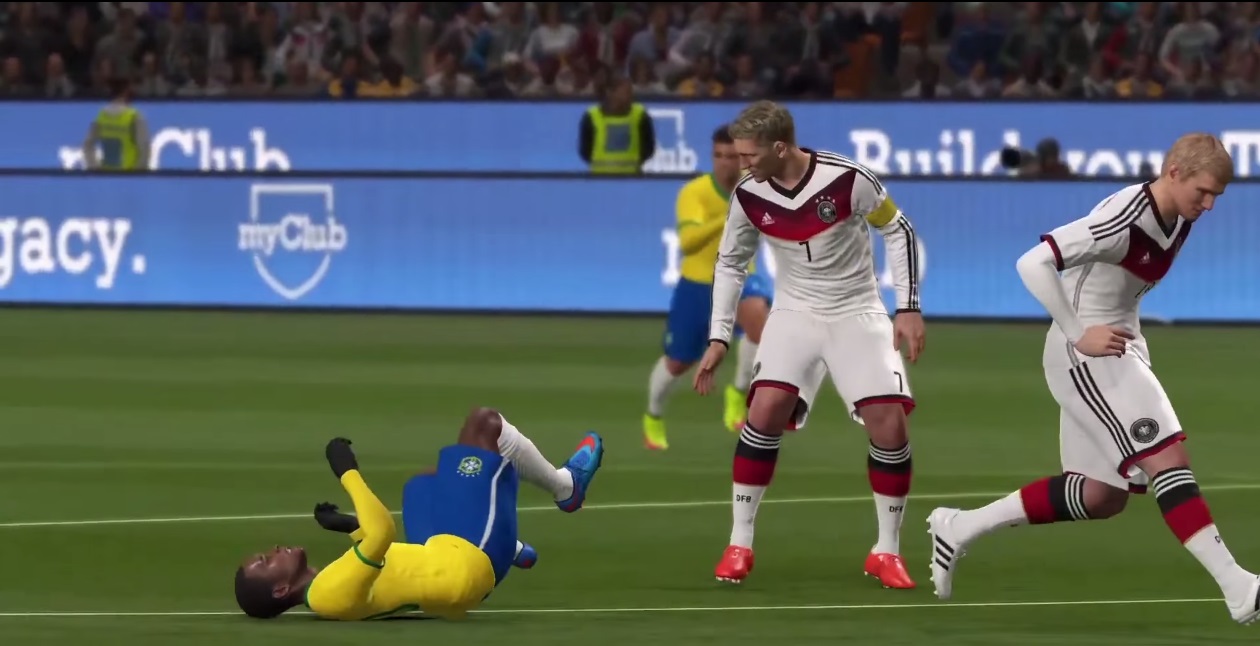 This preview brought to you by Jorp

Who would have thought that Tokyo Game Show, rife with interesting and weird games as it is, would lure Steven and I to try Pro Evolution Soccer 2016 (or, Winning Eleven 2016 as it’s called here)? The Konami booth has proven to be a fine source of entertainment for us already, and PES kept us grinning. Good call as it turns out, but maybe not for the reasons it should have.

As it turns out, we play virtual soccer about as well as we play real soccer. Maybe worse, if you didn’t account for the frequent breaks and breathless vomiting that an actual game would bring about. My Juventus FC Jeeps stumbled to an unimpressive win, making them the winning XI. Oh, I get the name now.

STEVEN: Soccer, originally derived from the socks worn by the players, is cool. At E3 2015 a very old Pelé spent two hours on the EA stage telling an anecdote about calling soccer “the beautiful game,” which is not really a thing people say, except for ironically, like calling coffee “morning mud.” I mean I guess to do something ironically someone has to have done it genuinely.

Brett played as the Foot Locker-striped Jeeps and I played as Roma. I didn’t know Jeep was an Italian brand. I feel bad typing it without us getting paid. Let’s call it “Jorp.” As much as we joke, having a sport play out without commercials (because the players and stadiums are the advertisements) is kind of amazing. On the other hand, I don’t want to see a Sizzler logo on a San Francisco Giants jersey. The entire NFL is one constant running advertisement. I think in the modern era of sports subscriptions that block commercials, I’d rather take the blank periods than see all the advertising on folks.

I recognized Buffon from the 2006 Italian World Cup team (and a few other soccerers). He has a great head of hair and thousand yard stare in Winning Eleven. This is the first calcio game I’ve played since a few FIFAs ago but they still feel the same? Maneuvering tiny any people over a giant pitch like electronic football from far away.

BRETT: The real joy didn’t come so much from our unskilled controlling of these little athlete men, but in the replays that followed. The one goal that was scored saw Tevez running away from the goal, shooting it behind him, the ball ricocheting off several players including the keeper before finally being tapped in. All the movements were spot-on, but completely silly upon review given that these are representations of the finest footballers in the world. Like, Tevez would never just dart straight out of the box in that attacking situation.

Similar comedy struck on the occasions when we committed to the idea of committing hard fouls. Rather than try to gracefully steal the ball, we’d end up stalking our prey before chopping them down at the legs. The replays confirmed that, yeah, we probably earned those yellow cards. Didn’t manage to get a player sent off, though. 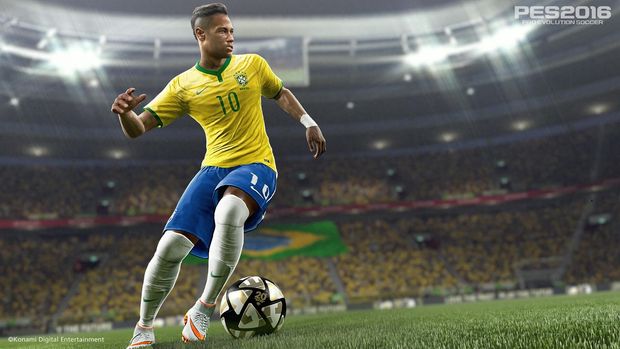 STEVEN: Well Brett really likes Yellow Card so it was appropriate. How about the fact that we couldn’t figure out how to skip the replays? Maybe it was the Share button to skip. I think we hit every other one. But yes, not skipping them lets you appreciate how….goofy these things look up as they strain to approximate human movement and the nuances of some of the greatest athletes in the world (after school teachers, nurses, and firemen).

That goal was some bullshit, though. I took like six respectable shots on goal and got nothing, you had weird physics bounces and four assholes tripping over themselves and a chip shot. That is sports, mind, It’s why it’s so gif-able.

Rocket League is still the better soccer game, though. It’s more realistic. You have to control individual movements instead of electronic football floating. FIFA and PES feel more like real-time strategy games to me. Baseball has the advantage of being a one on one sport, football of the quarterback being most important, and basketball gets to shrink everything down for intimate and more detailed five on five.

BRETT: Sure, PES 2016 isn’t going to be the next video game du jour and find widespread acclaim like Rocket League has. It’s just a good soccer game that good soccer game players will love — just as they have with previous PESes. Those folks probably already know that. They’re the ones who can make those replays look like actual soccer, but I get more of a kick out of our style.