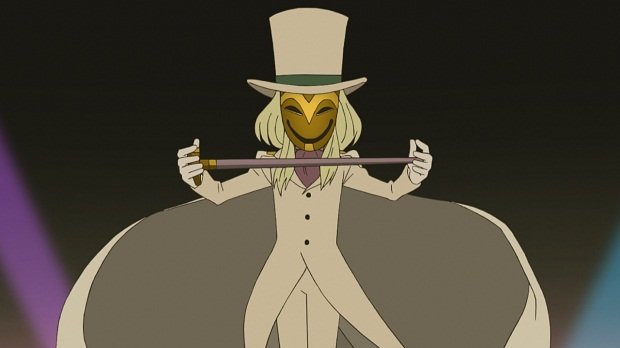 As great as the Professor Layton games are (they are really great!), the last four released on the Nintendo DS have been very similar. While the art direction, puzzle-solving gameplay, and surprisingly emotional stories have been stellar, none of the last games really did anything new and shocking to move the series forward.

With Professor Layton and the Miracle Mask (the series’ first entry on the 3DS), things are definitely changing. And, if the demo I got to play at PAX was any indication, these changes are definitely for the better. 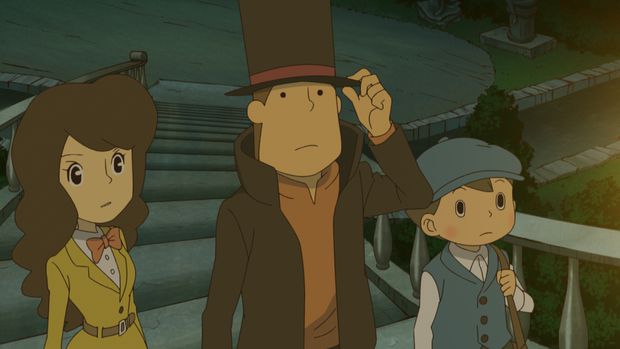 If you are familiar with the Professor Layton games, you know how things work. Professor Layton and Luke (as well as some other members of the main party), explore various locations and meet an eclectic cast of some of the best supporting characters to ever grace a videogame in order to solve a series of mysteries. Along the way, the player must help them complete hundreds of progressively more difficult puzzles until all mysteries are complete … and I am sobbing uncontrollably in front of my Nintendo handheld (seriously, the stories in the Layton games are genuinely heartbreaking!).

With Miracle Mask, things start off on a similar note, but you will quickly realize how much things have changed.

First, and most obvious, is the addition of 3D.

Good news for people nervous about the sloppy use of 3D: the 3D effects in Miracle Mask are beautiful. The classic Professor Layton cinematics come even more to life and are stunning to watch with the added layers and depth the 3D effect creates. 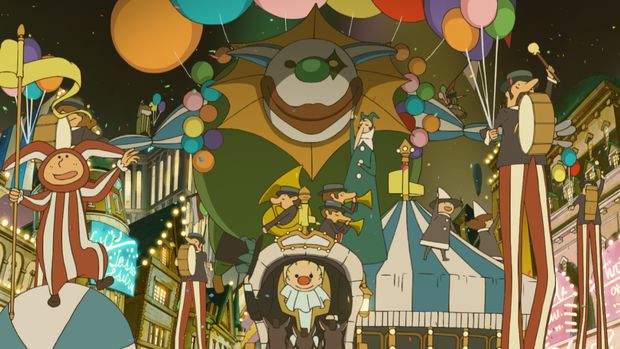 In addition to the cutscenes, the 3D works great in the actual game. After solving a puzzle correctly, when Layton approaches the screen and points at you with a congratulatory exclamation, he is really pointing at you. His finger comes right out of the screen! It is really cool and a nice touch.

The benefits of the 3D are actually evident everywhere in the game.

One major change to the game is the disappearance of static dialogue sequences. Replacing those beautifully rendered images are actual moving, fully polygonal characters. The change was jarring at first, and I kind of missed the old dialogue displays, but once things get going, you will love the new look.

With this new style, everything feels more alive, as the camera can move around and every part of the character animates, as opposed to just their mouths. Also, again, the 3D looks great.

This same style also moves into the actual locations. Instead of static images, the world is fully animated. You can’t walk through it like you can in a normal 3D action/adventure game, but, when exploring, the camera moves ever so slightly and makes you feel like you are much more part of the environment … rather than just looking at a beautiful painting of it from afar. 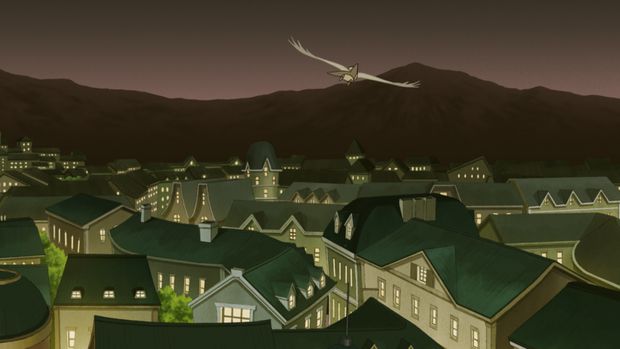 These exploring sections also have another big change. The tap-tap-tap-tap-tap gameplay is gone! No need to tap everything with the touch screen to find a hot spot or hidden coin. Now, you drag a magnifying glass around the screen, looking for areas where the object “lights up,” indicating there is something of note there (whether it be a puzzle, hint coin, or interactive item).

Before you cry foul, this new technique works great. And it looks fantastic! As you slide the magnifying glass along the touch screen, a mirrored version of it appears on the top, 3D screen. The way important text is displayed closer to the screen and small pieces of the environment like rooms in windows are more pushed back in the 3D space is eye-popping and very polished. 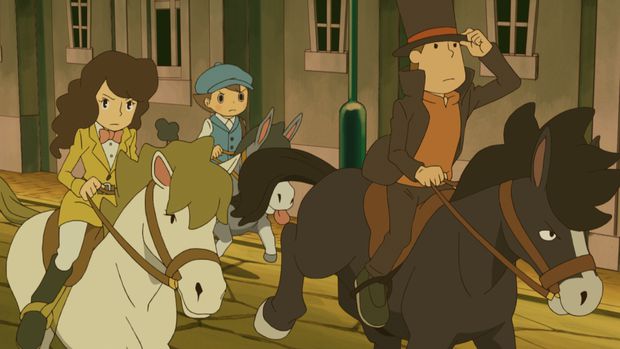 The demo was short, but one more difference that stood out was the inclusion of almost action-like sequences. One puzzle in particular wasn’t even a puzzle at all! Professor Layton hops on a horse and chases a mysterious character. Instead of this being a traditional puzzle like you would normally see, the camera moved behind Layton as he chased the character through a vibrant village. Players are tasked with controlling Layton’s horse to dodge barrels and navigate the maze-like streets. It was an interesting sequence and unlike anything that has been in the series before.

All in all, Professor Layton and the Miracle Mask is looking great. As a giant fan of the series, this looks to be shaping into one of the best games yet. It looks beautiful, the 3D is surprisingly effective, and the puzzles are more challenging than ever.

I can’t wait to pick up the game when it releases for the Nintendo 3DS on October 28.