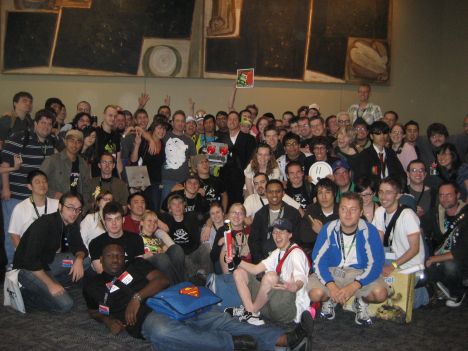 NARPs: It’s what happens when Dtoiders get together and there’s No Apparent Reason [but to] Party. Starting this weekend, and going into November, several of the Destructoid city groups are all having some sort of party. All of these parties are community driven because talking to each other over the Internet just isn’t enough for us. See media jerks, gamers aren’t all basement dwelling social inept losers … mostly.

Dtoid New York, Los Angeles, Baltimore, Miami, UK and Australia are all having an apparent party in the next few weeks and you can find out when they’re going down after the jump.

Who: DtoidNewYork
Where: At Nintendoll’s in New York
When: October 24-26

Today, members of DtoidNewYork will be attending the Capcom/Street Fighter Club event at some super secret location. If you didn’t pre-register, than sucks to be you! Capcom is beyond their limit as hordes of people want to get their hands on Street Fighter IV and Super Street Fighter Turbo HD Remix.

On Saturday, the group will be attending a Pulsewave show, a concert dedicated to Chiptunes. The concert will see Anamanaguchi, Bit Shifter, Nullsleep, Glomag and a mystery special guest performing. Plus, there’s going to be a costume contest with cool retro prizes! For full details on where the concert will be, check out Zen Albatross’ C Blog.

Later on in the day, there will be a NAVA meeting at Digital Press and then a NARP at Nintendoll’s place.

Where: Wolverhampton in the United Kingdom
When: October 31 to November 3

Bunnyrabbit2 is hosting the next UK NARP. It’ll be taking place in Wolverhampton on Halloween and going until November 3rd. If you’re interested in attending and need more details, hit up bunnyrabbit2 for the info. Also, there will be homebrewed mead. Nice.

KyleGamgee and MamaDonna will be hosting a Halloween after party on November 1st. Costumes are required, but don’t wear anything too over the top. Kyle and Mama have a gigantic inflatable slide and complicated costumes will no doubt prevent you from using the slide. Just go naked.

Be sure to check out the DtoidLA Google Group, where most of the planning takes place for all of DtoidLA’s parties.

I try not to pick sides, but it looks like DtoidBaltimoreDC is going to have the best NARP of all. Why? BECAUSE BRUCE CAMPBELL IS GOING TO BE THERE! Well, sort of. Dtoiders in Baltimore will be meeting up on Friday, November 14th to check out a screening of My Name is Bruce. Bruce Campbell will actually be at this screening and is having a Q&A session afterwards. So awesome.

Then, November 15 through the 16 will see Dtoiders at Hitogoroshi’s place and having a weekend long NARP. Contact Hitogoroshi for all the details.

Rock Band 1 is finally making its way to Australian shores on November 7 along side Guitar Hero World Tour. To celebrate, FooLiz will be hosting a Rock Band/Guitar Hero party at her place on November 15. Contact FooLiz to let her know if you’re attending.

Who: DtoidFlorida
Where: Florida International University
When: November 21

Finally, lets talk about the biggest NARP taking place since the Cincinnati NARP. Niero, Colette and Tom Lackner will be hosting the first official Destructoid Miami NARP at FIU. There will be tournaments taking place with a PS3, cold hard cash and other stuff up for grabs.

If you live near any of these groups, let them know you exist whether you can attend these parties or not! The same goes for all of these other Dtoid groups:

If you live near any of these cities and want to party with Dtoiders, than let us know! And if you’re interested in starting up a Dtoid City group, then send me an e-mail.