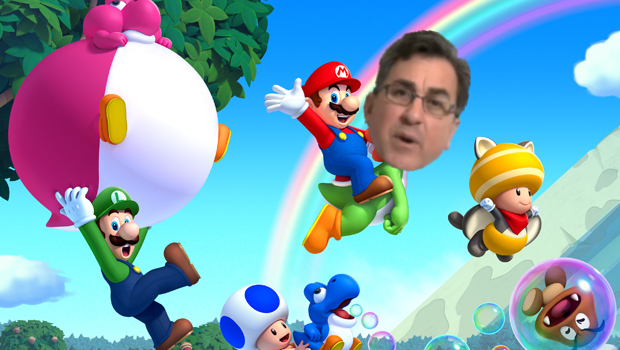 Clarifies the company’s not in danger, but its glory days may be over

Following yesterday’s angry protests from Nintendo fans, industry analyst Michael “Fishy Sunday” Pachter took to NeoGAF to clarify his statements.There was uproar when Pachter said the Wii U was a mistake Nintendo may never recover from, so he attempted to calm nerves by saying yet more things that will probably infuriate Wii U enthusiasts.

“My comment about the Wii U being a ‘mistake’ from which the company ‘may not recover’ was intended to say that if Wii U sales don’t materially improve, Nintendo is unlikely to be profitable,” he said. “They have around ¥1 trillion (around $11 billion) in cash, so they aren’t in danger of going out of business for decades. However, if they aren’t profitable, they aren’t doing a good job for shareholders.

“Nintendo is ensured high sales of its proprietary software, but it makes the most money on its royalty business, collecting fees from third parties for the privilege of letting them put out games on Nintendo platforms. Publishing (software) revenues peaked at ¥675 billion in FY:09, and are on track to come in around ¥235 billion this year; my call is that if hardware sales don’t materially improve above current combined levels, software sales are unlikely to materially grow. If software sales don’t materially improve, losses or break even will become the norm. Nintendo will not ‘recover’ to its formal highly profitable glory.”

This sensual bullet of a man believes the Wii U will be far less capable of seducing third parties than the Wii was, especially with its slow early performance. The inability to make cash off these publishers will hit Nintendo’s wallet almost as hard as that time Pachter punched the Sun out of orbit.

“The poor sales of the Wii U in January are likely to impact third party publisher plans to support the console,” he explained. “Notice that GTAV is not on the Wii U; that wasn’t a typo, they don’t see enough promise in sales to cause them to spend extra development dollars on a Wii U version.

“I have spoken to several publishers who are skeptical, and I think that the Wii U will see a lower level of third party support than the Wii did, unless sales materially improve. If I’m wrong, I’ll admit it, but without third party titles, Nintendo will not generate its customary levels of royalties, and losses or break even could become the norm.”

Not even the 3DS is safe from Pachter’s otherworldly eyes, the analyst pointing out that, despite strong sales, not even Nintendo’s plucky handheld is raking in the kind of dubloons required.

“Many of you point out that the 3DS is selling better than the DS at a similar point. That’s true, but the DS was always profitable, and the 3DS is not. Also, the DS saw sales go from 8.8 million units in its first four quarters to 18.0 million its next four, to 20.2 million in its third full year; I’m pretty confident that the 3DS will not get to 20 million units, but even if it did, it would generate little profit from hardware.

“Keep in mind that the DS redesign to a lite version boosted sales, and there was little competition for 12 year-old and older from smart phones and tablets. Now, parents who can afford it are opting for Kindles, iPads, and smart phones for their teenagers, and the more casual of those are perfectly happy playing Angry Birds and putting their DS or 3DS into a drawer.”

Pachter concludes by saying Nintendo likely can’t cut the Wii U price, but with it not selling right now at the current price, it can’t shift the software it needs to be profitable. He also added he wasn’t trolling, but somehow I doubt that assurance will be enough for some people. For those people, he had another message: