After a questionable pair of sequels, Game Freak knocks it out of the park

When Pokemon X & Y was first announced, opinions between fans were torn. Some didn’t like the 3D models and emphasis on a flashy visual style, and others thought of it as the natural evolution of the series.

At first, I wasn’t completely sold either. Although I was floored at the prospect of a new Pokemon game, it took some time until the game really warmed up to me. After catching every single Pokemon in the Kalos region Pokedex (all 454) though, I realized something — I was having the most fun I had ever had with the franchise.

Because truly, it’s the little things that made me fall in love with X & Y. 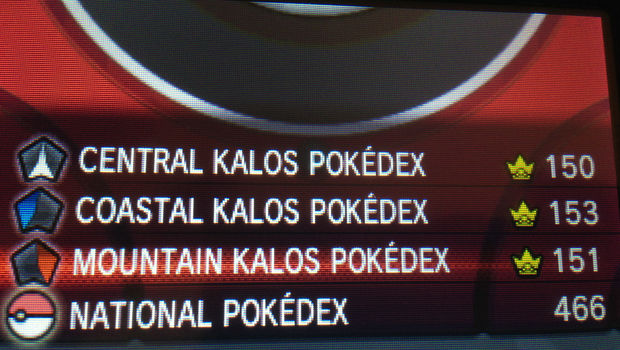 At first, I was a bit taken aback by the new 3D models. Within the confines of the first few hours of the game, it’s hard to see the sheer amount of effort and care that went into them, because the intro areas aren’t necessarily all that grandiose. But once I started to acquire more and more Pokemon, I saw the magic come to life.

For instance, Braixen — the evolution of Fennekin — has a broom sticking out of its tail, which it will grab for certain moves and light on fire. Goodra, a literal goo dragon, actually has goop dripping off of its limbs in battle, giving off the allure that it’s actually made of a sticky substance. Ludicolo the sombrero wearing leaf Pokemon, dances around and generally just goes apeshit all the time — I can’t not have a smile on my face when it happens. Even old Pokemon from the first Generation have a new spark to them, and Mega Evolutions are a great optional way to completely rediscover your favorites.

When combined with Pokemon descriptions in multiple languages, as well as their own icons and complete 3D overhauls, the amount of work that went into rendering 718 unique pocketmonsters is staggering. The more you play it, the more you appreciate it, and I’ve never really felt that way about a Pokemon game before quite like this.

Since I tend to play the franchise with my wife and a group of close friends, better social functions are always welcome, and X & Y delivered. The “PSS,” or Player Search System is instrumental in that, as it offers up an incredibly simple way to trade and battle. All you have to do is bring up the PSS on the bottom screen, tap a friend’s icon, and away you go. Within seconds you could be initiating a trade, or selecting from a list of combat rules no matter where you are in the game.

Previously (in pretty much every game), you had to return to the Pokemon Center, get your affairs in order, make sure your friend was there too, then initiate a multiplayer session, then talk to each other in a lobby, and select an activity. Now, I could be deep in a dungeon searching for a rare Pokemon and my friend could be shopping in Lumiose City, and we could start a trade instantly. I’ve even experimented with the four player battle system with my wife and two friends, and we had a blast without a hitch — it was just a few menu taps away while we were off doing our own thing in our respective games.

The GTS (Global Trade Station) is another huge improvement in X & Y. You can log on, search for any Pokemon in the entire game, and trade to your heart’s content. If the “Global” part of GTS didn’t give it away, you can trade with people all over the world, including Germany and Japan in the hopes to complete your Pokedex. It’s fast, easy, and a lot of fun, which is how trading should have always been on the DS.

A good mix of new and old:

I’ve completed every Pokemon game to date, but there was something missing with Black and White 2. Whereas the original Black and White felt like a solid effort to make the experience new again, Black and White 2 offered no new Pokemon whatsoever, and as a general rule, just felt stale. But with X & Y, I really feel like I’m playing a completely new game, with an air of familiarity to it. While the first few hours are littered with sidequests and distractions, once the game opens up it’s still the same classic experience you know and love — getting down to business, beating gym leaders, and catching Pokemon.

The beautiful orchestral soundtrack is also a major plus, especially given the sheer variety infused within it. One minute it could sound utterly familiar — like a Pokemon tune you’ve always known and loved, and the other, it could sound completely foreign (quite literally, due to the Parisian influence). For once, I’m actually kept guessing as to what I’m going to hear, and the soundtrack has played a big role in my enjoyment of X & Y.

A better infrastructure for the future:

As I touched on briefly with the PSS and GTS portions of the game, Game Freak has essentially future-proofed this franchise with the technology of the 3DS. With a solid set of servers in place and the upcoming Bank & Transfer App (and thus, the ability to rely on both cloud and local storage solutions), there’s almost no fear of losing previous generations of Pokemon.

Plus, the stage has been set for a potential DLC transition into Pokemon Z, without requiring gamers to buy a full retail release, as well as simple distribution methods through the eShop, which is much more stable than anything the DS, or prior handhelds ever had to offer. Pokemon X & Y still has a long road ahead of it, but I can’t wait to see what the series has in store for us, especially based on what I’ve already seen so far.