This Wednesday’s arrival of Bayonetta and Corrin as the final Super Smash Bros. DLC isn’t quite the entirety of the last Smash DLC. Easily overlooked is the sixth wave of Mii Fighters, Nintendo’s avatars dressed in silly costumes. It’s obvious why they take a backseat to beloved characters from established properties.

But, one of those Mii costumes is a Knuckles suit, and that might cause a stir — especially given how weird it is to see a human face peeking out from those head spines (or whatever they are). Tails is represented too, but with a hat for a head instead of a full-body suit. Can’t win ’em all.

The other Mii Fighters releasing on Wednesday are Gil from Tower of Druaga, a bionic armor suit, Ashley from WarioWare, and Takamaru from Nazo no Murasame-jō. In terms of being true to their original look, Ashley’s probably your best bet. But, Knuckles is your dude if you value unsettling and slightly off-putting. To each their own. 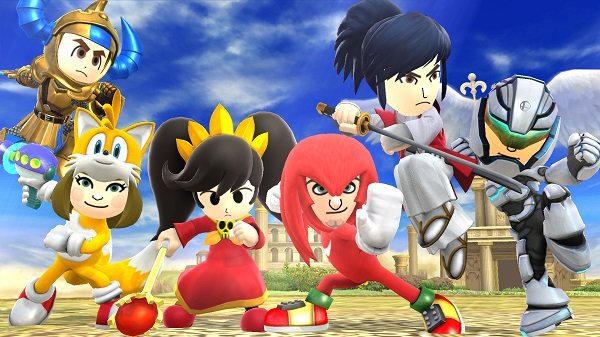