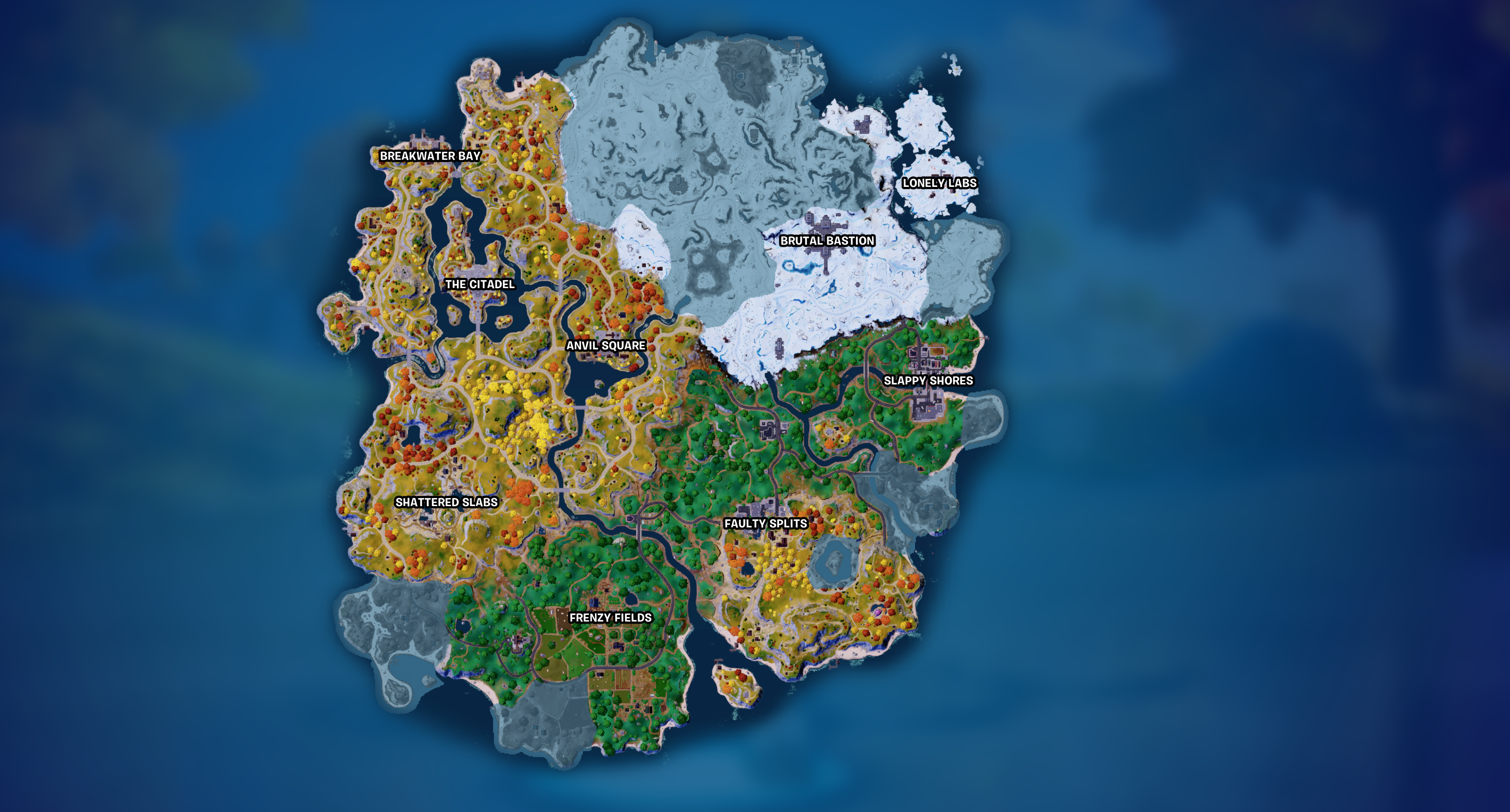 In case you haven’t been playing Fortnite for a while: it has a story! While previously Epic was content to just have a general setup for their battle royale, they eventually started adding light narratives, then full-on story missions into the mix. Chapter 4 season 1 continues that trend, with a brand new storyline that involves another island, an AI, and a group of knights.

Here’s how to start the initial week 1 story quests and finish them.

1A – Make contact with AMIE at a Hologram Brazier

This is going to be the first step in many Oathbound quests, and they’re found strewn about nearly every POI (point of interest) on the new map.

If you’re looking to do a lot of quests in one run, the further away from the main bus drop line you choose; the better. You could also choose one close to Shattered Slabs, for easy access to the next quest. 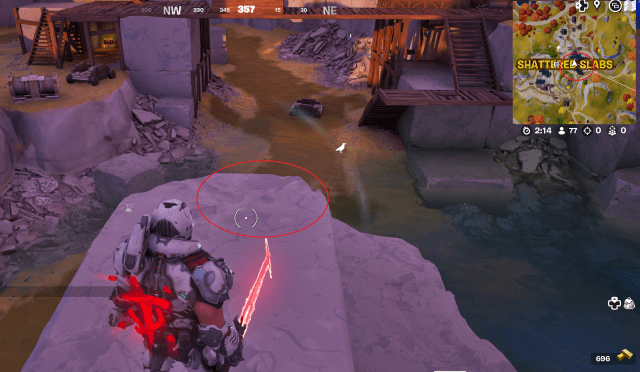 1B – Download pieces of Paradigm’s encrypted message from Data Beacons

Data beacons look like little small droids with blinking red lights: and they’ll show up directly on your map.

Here’s one of the spots they’ll be at: Shattered Slabs is an easy to find location, and this rise is on the minimap right above the letter “D” in Shattered Slabs. 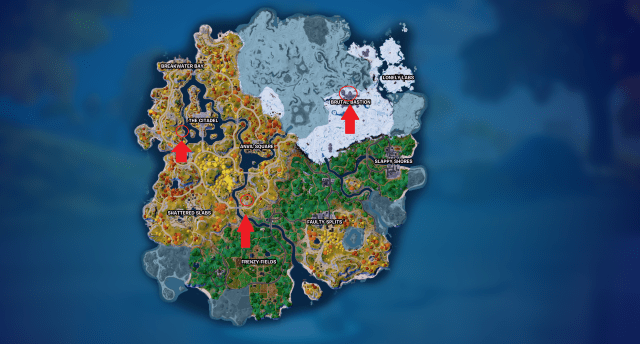 As much as I’m enjoying the addition of the story bits in Fortnite, many quests/challenges involve errands disguised as exposition. This, and the other times you visit Hologram Braziers, are included.

All you need to do is open up a small waist-high box that’s listed on your map (we’ve provided a map of our own as a reference, above). The chest to the east of Shattered Slabs is a great location. 2A – Make contact with AMIE at a Hologram Brazier

It’s one of these again! Just go right on over to Shattered Slabs and interact with either brazier.

Your next quest is in Shattered Slabs, thankfully! 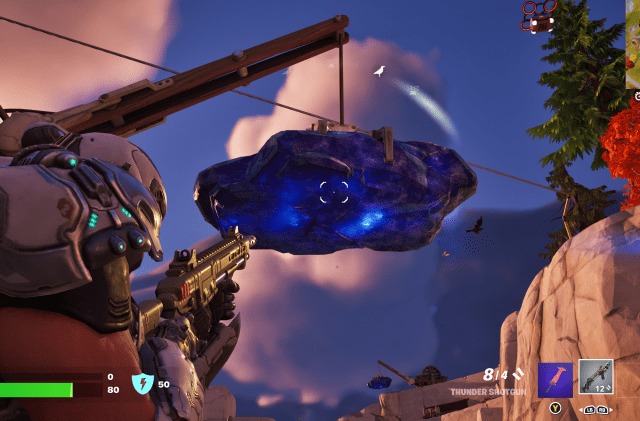 Get out your harvesting tool and strike any piece of ore that looks like the above image (glowing blue material).

Literal chunks will pop out: collect them to complete the quest. 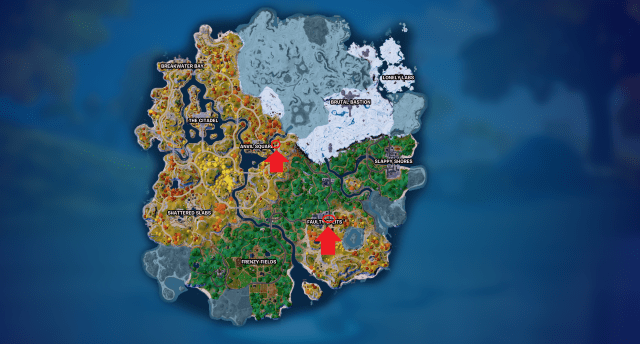 3A – Make contact with AMIE at a Hologram Brazier

For this one, you’ll need to make contact with AMIE at several fixed braziers.

The one at Anvil Square has easy access to The Citadel: which is a key location for the next quest (finding a Shockwave Hammer).

3B – Collect a Shockwave Hammer

You can find Shockwave Hammers (purple giant hammers) littered around the new map: or you’ll have a greater chance to locate them in Oathbound Chests.

You’re in luck! We have a full guide on how to get the Shockwave Hammer here. 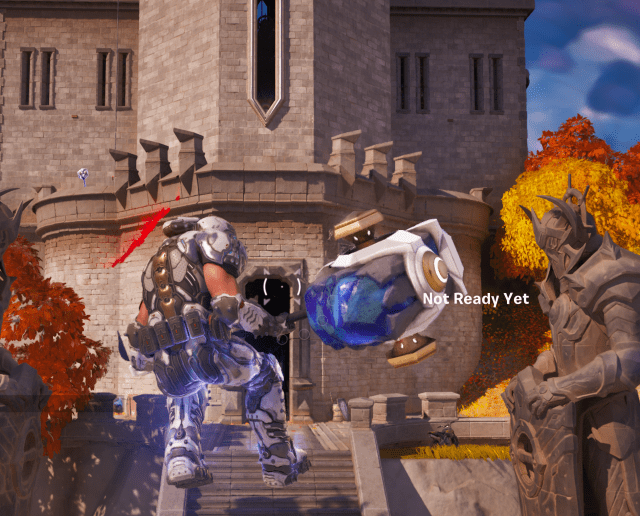 3C – Travel 150 meters by bouncing with a Shockwave Hammer

For this one, you’ll just need to use the aim/ADS key/button (defaulted to LT on console) to bounce. If you hold the button down, you’ll continue to bounce until you run out of charges (by default, four, with a 15 second recharge time per charge). If you leap off of a big cliff and hold the bounce button, you’ll travel 150 meters very quickly.

We also have a full bouncing guide here.

All you need to do is hit an enemy once with it to get this easy quest/challenge done. You can even bounce into them and slam. 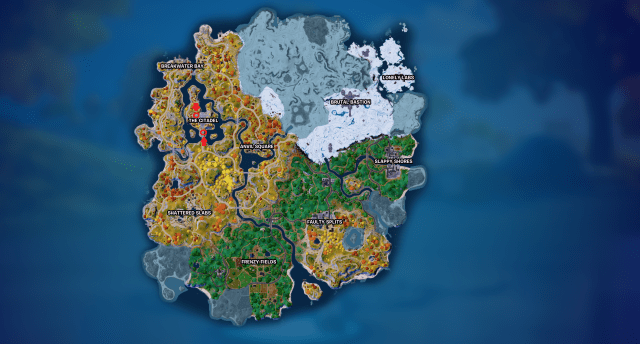 4A – Make contact with AMIE at a Hologram Brazier

As we wrap up week 1’s Oathbound questline, you’ll need to talk to AMIE at another brazier in the north or south of The Citadel. 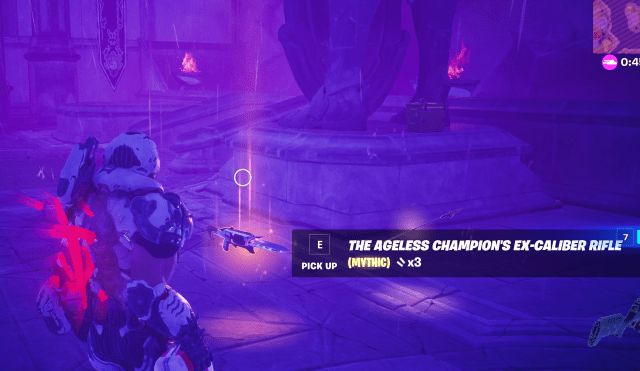 4B – Assist in defeating the Ageless Champion

The Ageless Champion is the initial chapter 4 season 1 “world boss,” and it resides at The Citadel. Like other bosses in Fortnite‘s history (The Herald and Darth Vader included), you’ll need to “assist” in defeating them: so even just one hit will do, so long as you live until the Ageless Champion is defeated.

As such, you may want to get to The Citadel quickly so someone else doesn’t take it out first. We have a full guide for defeating the Ageless Champion here.