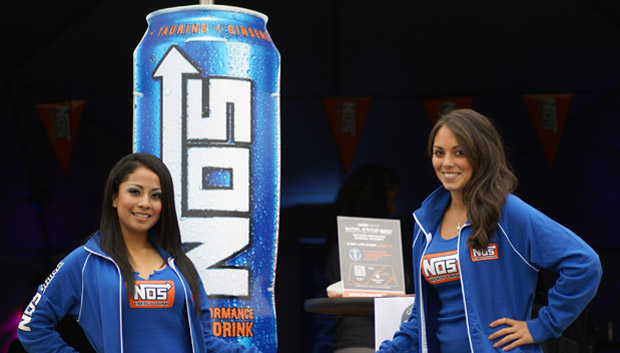 After chugging a few NOS energy drinks, Crave Online had the jittery idea to break a world record at E3. It involved no sleep, fighting games and a tent full of energy. Fatalities and X-Rays were included too. Fueled by energy drinks and the lust for punching someone in the face, four gamers banded together to wreck the Guinness World Record of “Most Consecutive Hours Played of a Fighting Video Game.”

And wreck they did.

Located just shy of the convention center, NOS energy drinks and Crave Online collaborated to shatter this world record and get some E3 attendees the energy they need for the expo.

“We provide the gamers and NOS provides the fuel needed for this attempt,” said Nicole Chavez, senior marketing manager for Crave Online. “There is no better fit for this record attempt than Crave and NOS.”

Starting on June 7, the first day of the show, Lance J. Moose, Melissa Estuesta, Cristopher Bryant, and Paul Chillino started their attempt to break the world record of 30 consecutive hours of play.

Playing the newest iteration of Mortal Kombat, they were set for 31 hours to beat the record, but shot for 38-40.

“We wanna be able to show others that if you wanna beat our record, you have to work for it,” said Chillino.

Chillino has stuck with the Mortal Kombat and Street Fighter series from the very beginning and though just a casual player, is interested in taking his skills into the tournament scene.

Though mainly a Call of Duty: Black Ops gamer and longtime Ghost Recon fan, his fighting game love has rekindled with the latest release of Mortal Kombat.

“The series has really gone back to its roots with all the blood, guts and glory,” said Chillino.

The idea of breaking a world record at E3 came from the creative director and the sales representative of Crave Online in order to hone in on big gaming events and gain a larger presence, according to Chavez.

The internal teams at Crave Online collaborated with their community to find the best gamers for the record attempt.

The whole sleepless affair was live streamed on Crave’s website icraveNOS.craveonline.com with interaction from the viewers through their twitter as well. Viewers had their tweets echoed to the gamers through the host of the live stream to give the gamers some motivation throughout their noble attempt at greatness.

NOS and Crave Online found the cure for sleep and it’s quite record breaking.