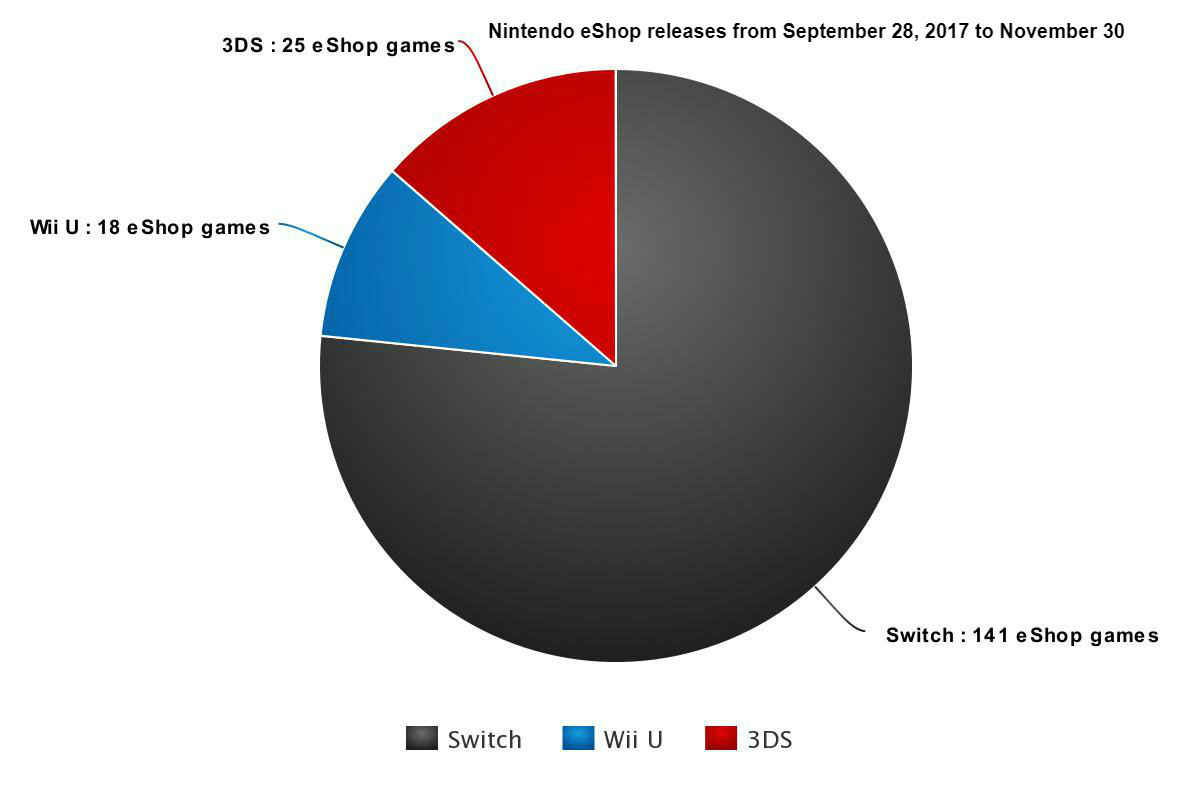 The Wii U is still alive, possibly in Portland

Most of you know that I run a weekly Nintendo Download column, where I take a look at the new releases on the eShop, spread across several systems. I’ve been doing it for years now without missing a week, even on vacation, and I started to notice certain trends recently.

To quantify those hunches, I audited the last two months of the entire eShop, from September 28 to November 30. Here are the results.

During that time period, the Switch has had a staggering 141 releases. That’s pretty insane for a system that’s not even a year old yet, even if some are ports (which the 3DS and Wii U also get plenty of). To put things into perspective, there were zero 3DS games released this week on the eShop, and in the past two months, there have only been 25 — including eShop and retail releases. Surprisingly, the Wii U is not completely dead as it’s hosted 18 games, nearly as much as the 3DS.

What does this all mean? Well, it doesn’t look great for the 3DS. Several developers have already explained that the platform is a tough sell due to poor curation, and have since jumped ship to the Switch. Nintendo claims that the 3DS will be supported “through 2018,” but given that so many have taken to the Switch’s portable features, I’m not sure that will happen. The potential nail in the coffin is the statement that not only will the next Pokemon be on the Switch, but that Ultra Sun & Moon are the last major Pokemon projects on 3DS — so all hope of a companion or simultaneous release is gone.

The Wii U can pretty much be taken out of the conversation as the system itself is out of production (it mostly serves as a comparison for the state of the 3DS), but the Switch is ramping up to possibly surpass the original Wii. If that actually happened and the Switch broke the Wii’s 101 million units, it would be the most successful Nintendo console of all time. The PS2 is still the king at roughly 155 million, followed by the DS at 154m, Game Boy/Color at 118m, and the original PlayStation at 102m, but with Nintendo’s concept of “multiple Switches per home,” taking that spot away from the PlayStation is feasible if they continue this momentum.

[Mobile was excluded from this study as was the Wii, both of which hosted just one release each. Pokemon Ultra Sun & Moon were counted as two games. DLC, demos, and apps were not counted.]