The next Skylanders is the last thing fans were probably expecting as there’s three major changes going on with Swap Force, the new entry in the series. For starters, it’s not developer Toys for Bob making this one. Vicarious Visions, the team responsible for the 3DS version of Skylanders Adventure, and the Wii U version of Skylanders Giants, is in charge of making the core versions this time around (With N-Space doing the 3DS version and Beenox handling the Wii version).

I’m not even going to give you a second to doubt another studio handling things here — Vicarious is really bringing it. The studio is using a new graphics engine that can very easily be mistaken for a Pixar movie. Seriously, it’s that good looking.

The biggest changes, though, are with the new toys. Swap Force is adding 32 new Skylanders heroes, 16 of which you can pull in half and fuse different top and bottom parts together to create new Skylanders. Take that in for a second. That’s a total of 256 unique combos. 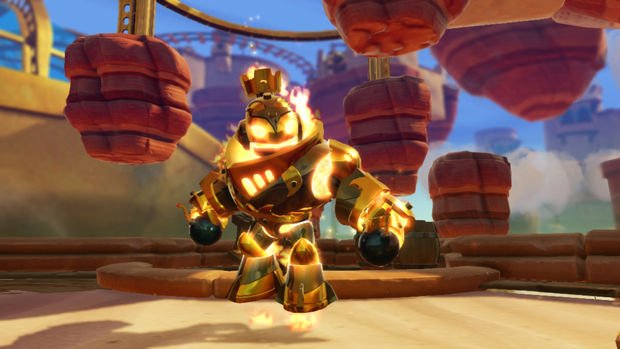 Activision showed off a very early look at Swap Force to us and even though there’s still a ton to work to be done, it’s easily one of best-looking games I’ve seen this generation. The visuals will seriously make you think you’re watching an animated CG movie, but it’s not just the graphics that give this feel.

Vicarious is infusing a ton of animation and life to the characters, capturing the spirit of what makes a Pixar film — and even some of the better Mario games, like Super Mario Galaxy — so charming and engrossing. Ridiculously high praises, but completely justified.

I can’t stress enough how this new tone makes it really feel like a cartoon show. Characters you’ll meet in the world are fully animated and voiced now with the bigger focus on storytelling, adding to the kids-show aesthetics. Nothing is pre-rendered either, and cinematics such as the one featuring Flynn (voiced by Patrick Warburton) that I saw were all comprised of in-game assets. 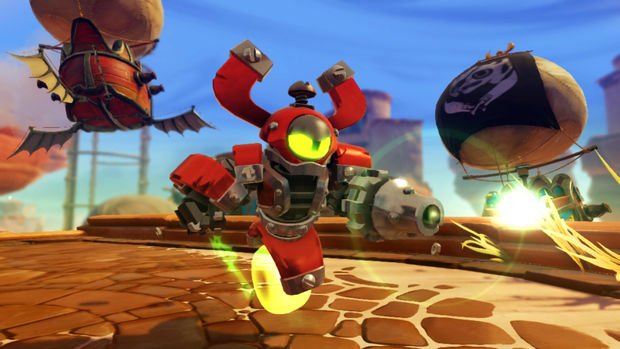 The all new swappable toys

As I said, there are 32 new Skylanders. 16 of them are your basic heroes, and the other 16 feature swappable body parts. This essential gives you the ability to make 256 unique combinations of different heroes. The two halves are connected by two small magnets that keep them pretty securely connected. In fact, I thought I was about to break the toy I was handed when I first tried to pull it apart.

Combining different toys will serve multiple in-game purposes. One of the new Swap Force heroes I was introduced to was Wash Buckler, a water-element character that’s a pirate squid. At one point in the demo, Wash Buckler had to go up against a mini-boss named Gear Gollum and Wash wasn’t the best suited for this battle due to his slow speed.

So the toy was taken off the Portal of Power, and his bottom half was removed to be swapped with the bottom half of Magna Charge, a fire- and robot-based new toy that gets around by a singular electro-magnetic based wheel. The two toys now formed Wash Charge, and the combo of Wash Buckler’s attacks with Magna Charge’s speed was able to make short work of Gear Gollum. 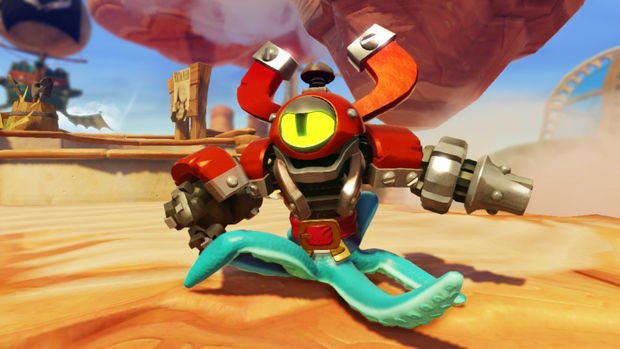 Now imagine doing that with 256 characters. Not only that, but imagine the developers having to plan, animate, and name all of these different combinations, on top of everything else going on. It’s quite the feat, that’s for sure. Other new characters I saw included Countdown, a walking bomb that can throw his exploding head around and shoot rockets from his hands. Blast Zone is a knight made of fire that can breath fire and throw bombs, plus can move around with rocket boots. My favorite was Roller Brawl, a roller derby undead character who has giant claws on her hands, headbutts enemies, and moves around on roller skates with buzz saws in place of normal skate wheels.

You should also know that each half of the toys have a memory chip, so they’ll be able to level up on their own as you move them around to different halves. As for the level cap, Vicarious wasn’t sure yet if they’ll be raising it.

Elemental zones are back, with the addition of two new zone types. The first are the dual element gates, so either a Swapple featuring the two required elements or just two people playing co-op with the right elements, will be required to enter them. More of the same there, but the new Swap Force Zones (tentative name) present totally new experiences.

These traversal zones require a certain body type, and the one I saw needed a character with a rocket to enter it. From here, the player was actually free flying around an environment, hitting a bunch of rings in order to complete the challenge. You can expect various new gameplay elements, such as areas where you have to climb on walls, compete in races, and dig to find hidden underground caverns.

As with Giants before, all the toys from the first two games will work in Swap Force, and yeah, all your upgrades and extras will be intact. Plus, they’ll all feature new animations to match up with the new engine. All 100-plus characters now also have to ability to jump now too, a big fan demand that will add some new gameplay elements. Expect local drop in/out co-op, and versus mode to return as well.

So this begs the question, is Activision pulling a Call of Duty by having two studios switching off with yearly installments? It’s too soon to tell for sure, but I was told by the Activision reps on hand that Toys For Bob’s Paul Reiche and I-Wei Huang, the two men that have the final say for the toys in their version of games, have been part of the toy design for Vicarious’ version, imparting feedback to ensure the Skylanders feel is present.

You can expect Swap Force sometime this fall, and while it’s too soon to know what the final prices will be, we do know that the starter pack will consist of two Swap Force characters, one Series 3 Stealth Elf in a new pose and outfit, new Portal of Power, and the game.

Needless to say, I was quite impressed by the fresh visual design and really dug the new toys. I love the idea of being able to merge different pieces together, and if anything, this is a great counter to Disney’s Infinity project.