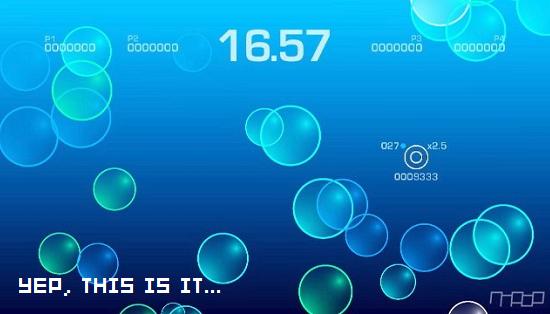 And Nintendo’s WiiWare roster continues to grow in the run up to the system’s March 2008 launch, adding another new third party title to the announced line-up today. Is it another game from Square-Enix? Is it the Wii’s Geometry Wars, the game which will click with millions world-wide and really sell Nintendo’s XBLA equivalent to the masses? Is it exciting in any way imaginable whatsoever?

Well no. It’s a game in which you pop bubbles. And then you pop some more.

Seriously. Don’t be coming to me asking for the big twist or the clever, genre-flipping gimmick that will turn the noble art of bubble popping on its head forever. Bubble popping’s what you get. That’s all. Bubbles come along and you pop them. You point at them, press A, and they pop. There are some details on the game’s site regarding combos, score multipliers and the like, and the ability to inflate the bubbles for extra points and play with up to four people, but essentially it’s all about popping those bubbles, and popping them good.

Now hit the jump for a – hopefully very early – trailer which will show you exactly how those bubbles are popped.