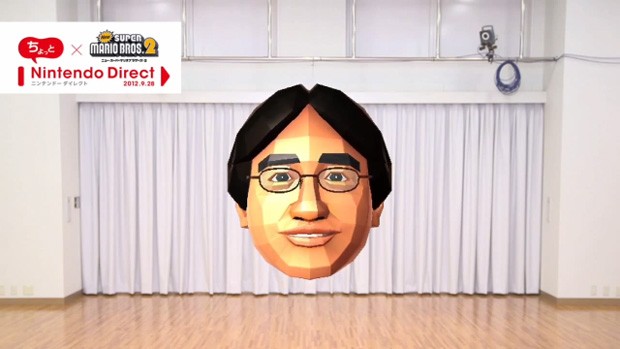 [Update: Slight mistake on my part. All three announced level packs will be available on October 2, with additional unannounced packs appearing later.]

Ooooooh, those sneaky Nintendo devils! Out of the blue, they announce a special Nintendo Direct for the very same evening, getting our knickers in a twist, just to announce DLC levels for New Super Mario Bros. 2. And here I was hoping to finally learn news about the Wii U’s online features, but I suppose Nintendo could always surprise us with yet another Nintendo Direct at, like, 4 AM on a Tuesday or something.

The best thing to come out of tonight’s announcement would definitely have to be Nintendo President Satoru Iwata’s disembodied polygonal head. He could give Dr. Kawashima a run for his money!

It would seem that this three-pack set of NSMB2 levels will appear on October 2, with another coming later in October and a third in November, all for ¥200 apiece. We should be receiving the same news from the American branch in a few minutes, so I’ll update with the relevant US information at that time.