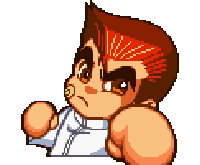 I was a little worried when our man in Japan Allistair Pinsof previewed Hot-Blooded Tough Guy Kunio Kun 3D a few months back. The mode he had the opportunity to play was based off of the original Renegade, and as Conrad Zimmerman always says, “Renegade was never, ever awesome”.

I can’t wholly disagree with Conrad there. Though I love the Renegade’s wanna-be 50’s greaser jukebox soundtrack, the game itself is pretty dull by today’s standards. What I really want from this game is a new River City Ransom/Scott Pilgrim-styled action-RPG. Thankfully, this trailer confirms that the game has both a River City Ransom-inspired mode, a Renegade-inspired mode, (including Super Dodgeball and Crash and the Boys), a mission mode that features battles against ridiculous oversized bosses and some volleyball players, a Battle Royale mode, a complimentary soundtrack, and crap loads more. There are even tiger-headed men! Yes!

The game comes out next month in Japan. If it never gets localized, I will buy a Japanese 3DS in order to review it for Destructoid, just to make you’re all sad that you never got to play it.