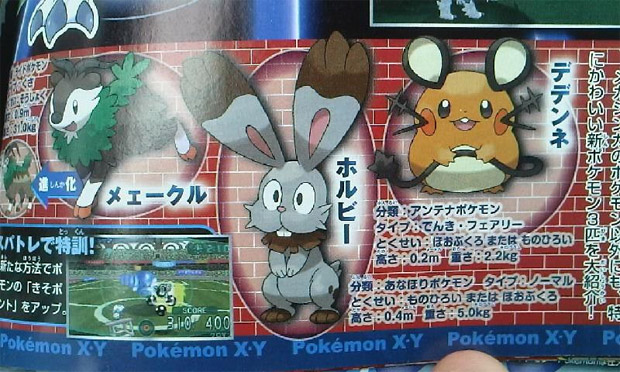 So chubby and cute

The latest Pokemon X and Y reveals will come across as predictable or totally bizarre depending on your relative level of Poke-mania. First up are some new wild Pokemon: Meekuru, the pre-evolution of the goat Pokemon Gogoat; Horubii, a rabbit Pokemon; and Dedenne, a new electric mouse that looks suspiciously like a short, fat Raichu. All adorable, but nothing too out of the ordinary for the series, at this point.

More surprising are the newly announced “Mega” forms of existing Pokemon, which seem to sit somewhere between a traditional Pokemon evolution and a Deoxys/Rotom/Kyurem-style form change. The previously revealed MegaMewtwo is joined by MegaBlaziken, MegaMawile, MegaAbsol, MegaLucario, and MegaAmpharos.

The process these six go through to achieve “Mega Evolution” remains a mystery, but I wouldn’t be surprised if it involves hair products. There are some truly outrageous hairstyles going on here. MegaAmpharos in particular looks like a Pokemon version of Fabio. In all seriousness, it sounds like new “Mega Stones” will play a part in these evolutions.

The Pokemon receiving this “new form” treatment feel almost as if they were chosen at random. We’ve got a Gen 3 starter, an event Pokemon, a legendary, and a few wild Pokemon from past generations. If there’s a pattern here, I’m not seeing it. We’re sure to find out soon enough, as Pokemon X and Y are set for worldwide release this October.