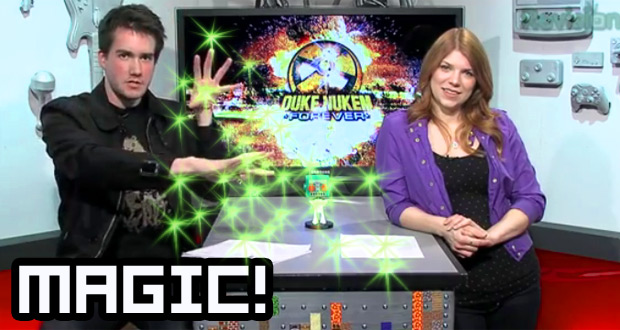 Move it, football-head. It’s Friday, so today’s episode of The Destructoid Show was carefree and whimsical. Here’s the rundown:

Jimmy Fallon, that guy who was in Taxi with Queen Latifah, sometimes covers video game news on his late-night talk show. This week’s been all post-E3 exclusives, including some PS3 footage of Battlefield 3. I say more irrelevant things about Duke Nukem Forever‘s critical reception, and so does Duke himself. Jim wrote a really good article about why the game isn’t a parody which you should read here.

Zelda fans will be bummed to hear there’s no 25th anniversary edition coming out, but I seize the opportunity to say creepy stuff about Robin Williams’ daughter. There’s some Portal 2 DLC on the way, but it’s not what you’re expecting. Last but not least, if you submit a video of yourself pretending to play Fruit Ninja Kinect, we’ll send you a poster that’s been autographed by the guys at Halfbrick. I’ll also draw you a picture of whatever you want. Including poo-poo.

Spoiler Alert: In an attempt to look more like Robin Williams, I’ve grown a beard.