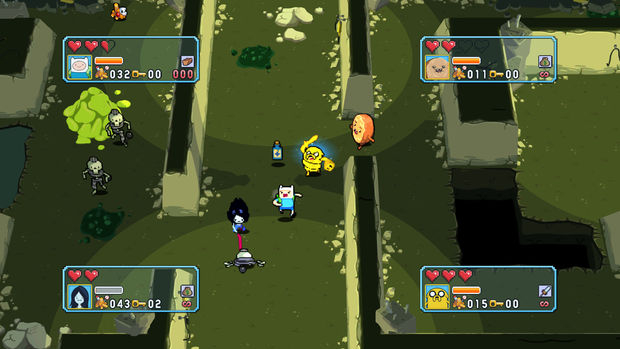 Exclusive to the 3DS because I DON’T KNOW!

The upcoming Adventure Time: Explore the Dungeon Because I DON’T KNOW! looks great. I enjoyed my hands-on time with the game, which has gone in a decidedly different direction from the Zelda II-styled Hey Ice King! Why’d You Steal Our Garbage?.

Explore the Dungeon Because I DON’T KNOW! is coming to PS3, 360, Wii U, and 3DS, but the latter is getting an exclusive collector’s edition, which comes in a Beemo steelbook case. It also comes with a behind the scenes DVD and the “Finn and Jake’s Dungeon Guide,” a “full color, enhanced manual filled with fun art and game tips.” The 3DS version of EtDBIDK! is priced at $29.95, ten bucks less than the other versions. The 3DS collector’s edition will be $39.95, the same price as the 360, Wii U, and PS3 versions.

The Wii U also has some exclusive content in the form of Beemo appearing on the Wii U gamepad with over 300 voice clips that will comment on the game and offer tips. Beemo will also appear on the bottom of the 3DS’ screen, but without the voice clips. Enticing enough of a package? Planning on picking up the cooperative dungeon crawler on a different system?