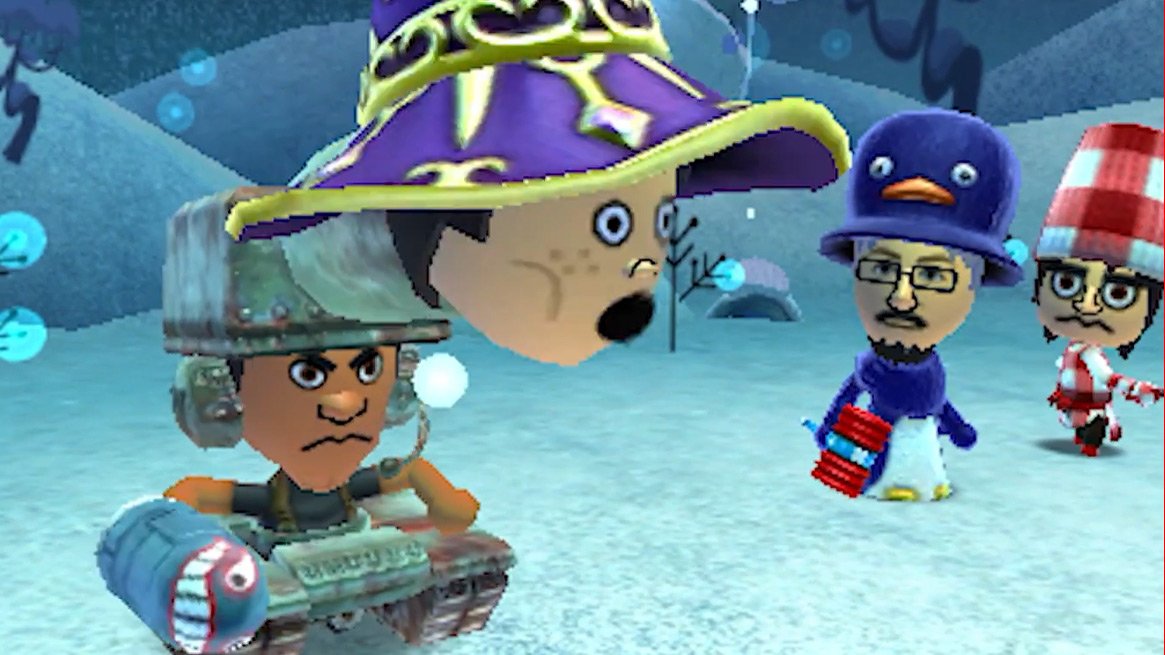 Yup, that’s the type of mood this game has put me in.

Miitopia is, distilled down to its very essence, Tomodachi Life: The RPG. Now, if that sounds like a “No duh!” kind of statement because both games star Miis, think for a second exactly what Tomodachi Life is. It’s a life sim, one that doesn’t really require much player interaction. Characters perform automatically and the player is only there for a few simple tasks. The core of the experience is you have to keep your island inhabitants happy, something that is also true of Miitopia.

Across the first continent of the game, I put it on cruise control to see if I was even needed at all. Final Fantasy XII’s gambit system gets a lot of flak for being something you can watch more than play; criticism perfectly suited for Miitopia. I have the option of deciding the actions of my main Mii, but the other three act based on their personality, class, and relationship with other members of the team. Right now the bond is strong between my Mii character and Houston Texans franchise player J.J. Watt. Lt. Uhura from the starship Enterprise and pop sensation Iwata are also close with friendships just starting to blossom between the whole group.

Happy characters are powerful characters. As relationships develop, I unlock new skills that allow Miis to team up for attacks, warn others when they’re about to be hit, or just shower each other with praise. Enemies can pack a punch, but with Iwata trying to impress J.J. or Uhura and my Mii teaming up for a front-and-back attack, my squad is able to stand toe-to-toe with the strongest foes they face.

With my Mii, the laid-back chef, making all his own decisions, I’ve seen the bonds between him and the other members fluctuate greatly. One of his moves is to cook up a spicy dish, feed it to a partner and have that Mii breathe fire on an enemy. This move can damage relationships and for some reason, my Mii kept using it with Iwata, driving a wedge between them in the early stages of their bromance.

Characters in a quarrel act in funny ways. During this feud between the two, Iwata would often jump in front of my Mii to get his shot in first, something of a “neener-neener” maneuver. He would refuse to cooperate in any of the team attacks I had unlocked between the two and would generally be bitter in their travels. I’ve spent plenty of time trying to get these two back on speaking terms only to have my Mii enthusiastically use that spicy dish move once more with Iwata, sending him straight to the dog house for another set of stages.

So control matters and it’s probably a good idea to make the choices of my main Mii as partner AI here isn’t all that smart. Characters routinely attack distracted or otherwise incapacitated enemies instead of dishing it out on those who have the ability to strike back. My thief lays down traps for enemies that don’t attack up close, rendering them useless.

I can’t get mad at their ineptitude because everything here is all in good fun. From the iCarly levels of drama to the odd nonsequiturs that punctuate our odyssey, Miitopia makes me grin. It’s not as weird as Tomodachi Life and the banter does tend to repeat often as we bustle down these branching byways, but building bonds between buddies is cathartic in its own uncomplicated way.