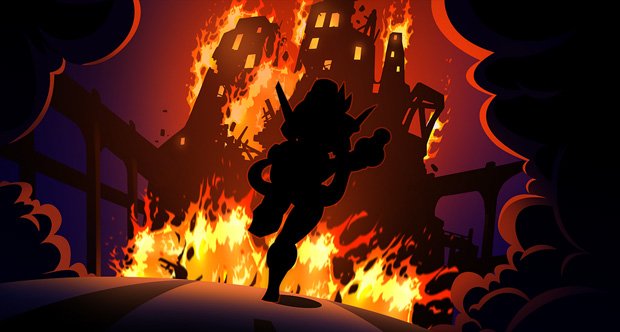 A pair of teaser images have appeared on WayForward’s Twitter page. The first is a seemingly in-game image of baby sitting alone on the sidewalk as the city around him burns to the ground, with the caption, “Who’s ready to Switch it UP?” The second is a piece of promotional art of a silhouette racing towards the very same city with what appears to be a hose in hand.

Anyone and their dog should realize that these are related to the upcoming Mighty Switch Force sequel, which was announced on Sup Holmes? last month. From these pics, we can probably assume that gameplay will involve the manipulation or extinguishing of fire. And that silhouette looks like cyborg heroine Patricia Wagon, only she has traded her pistol for a water pack.