I waited an hour or so to touch the filthy New 3DS that was running Metroid: Blast Ball, a chunk of the new Metroid Prime: Federation Force. I spoke to the friendly Nintendo rep and even shook my butt a bit whenever a new song started blaring out of the speakers at the nearby Just Dance booth.

Though I was sad that this wasn’t the Metroid that I and others were hoping for (and some are petitioning against!), I wanted to give it a fair shake. I probably had ten minutes or so with it, and came away not feeling too much about it. 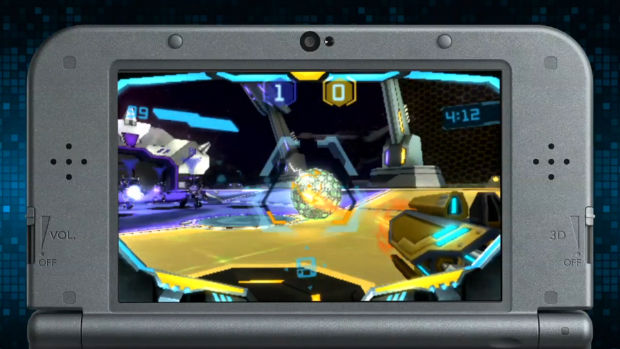 You’ve probably already heard that this could accurately be called Metroid Soccer, and I don’t really disagree with that. Three players each on both the Indigo and Gold teams need to shoot a ball into the opposing side’s goal. Your little member of the Galactic Federation jumps into a mech before the game begins, and then chaos ensues. Everyone starts shooting the big ball (which can hurt and even disable you if you touch it) in order to score a point. First team that scores three goals wins.

It’s not quite as simple as it seems. Power-ups like faster speed and energy tanks spawn randomly on the field and can turn the tide in your favor. I like that the ball can actually damage, as it becomes a game about the spaces in between players, the ball, and the goal instead of constant forward push. Using charged shots to keep the ball on the offensive seems like it would be more satisfying if there was snappier feedback, because right now it doesn’t feel consistent. Sometimes, you’ll launch a volley of energy and push the ball across the field. Other times, it seems like it refuses to react at all.

Blast Ball isn’t an entirely smooth experience. Though there didn’t seem to be lag, the controls were more sluggish than I was anticipating. The L button locks you onto the ball, which feels sort of necessary right now, but almost makes it feel like you don’t have much in the way of player agency.

I didn’t hate Blast Ball, nor do I expect to even dislike the full release. It has potential, but as of now it isn’t particularly exciting. I’m curious to see how they keep it from being repetitive, whether that’s with different rule sets, different obstacles, or more power-ups. I’ll keep an open mind here, though I don’t know that I’ll be able to easily find five others who share the same sentiment.

The awful haircut is going to happen tonight. Wish me luck.