Are you a fan of the Mario & Luigi series? You know, the handheld RPG games that star everyone’s favorite brothers in hilarious adventures? Then you’ll be quite familiar with how Mario & Luigi: Paper Jam plays, as it’s essentially the next game in that series with some of the Paper Mario characters mixed into the fray.

Players will control Mario, Luigi and Paper Mario on their adventure after Luigi knocks over a book that causes the paper world to leak into the world of Mario & Luigi. Exploring the 3D overworld is the same as previous titles: walk around, avoid enemies, or jump on them to start a battle.

Each character’s jump is mapped to a different button, meaning to jump up one ledge requires three button presses; multiply that by hundreds of jumps and you’ll understand how annoyed I was with the mechanic. Even in the demo, the amount of pressing three separate buttons just to move through the overworld felt excessive. I couldn’t imagine doing this through the entire game. Hopefully an option is added that allows all characters to jump at the same time by the time the game releases next year. 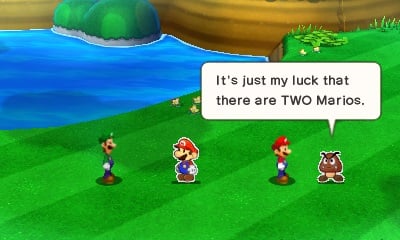 Trio attacks and papercraft battles are two additions to the series. Paper Mario allows characters to team up for trio attacks which are timed attacks that play more like a mini-game from WarioWare than the normal timed attacks. One trio attack has your enemies falling from the sky as paper as you whack a ball at them with tennis rackets. Papercraft battles have the heroes standing on top of a giant papercraft Mario and using it to rush down other giant papercrafts to defeat them. Both trio attacks and papercraft are rather minor yet welcome additions to the series.

On-point writing, great dialogue, fun turned-based attacks with a timed button press element — all staples of both the Mario & Luigi and Paper Mario series are still here and nearly unchanged, which is not at all a bad thing. Fans of either series will more than likely be pleased with this new crossover title, even if it mostly feels like another Mario & Luigi title. The series have always been rather similar other than aesthetic.

Mario & Luigi: Paper Jam is scheduled for release on the Nintendo 3DS in spring of 2016 worldwide.