Odolwa and Gyorg kitted out with new patterns, weird eyes

The Legend of Zelda: Majora’s Mask 3D is more than just a simple port. The portable remaster introduces sweeping changes, like adding fishing holes, apparently. Other things too, probably.

We can’t divulge everything just yet, as there’s a review embargo-shaped trapdoor under our feet, but some of the alterations to boss fights have seeped out into the Internet and the world at large.

While at PAX South over the weekend, I had the opportunity to demo the game, where I noticed Odolwa, the guardian of the Woodfall Temple, was a tad different than how I’d remembered. 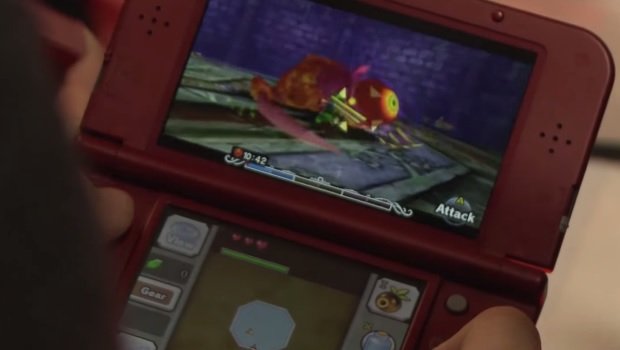 The change wasn’t immediately obvious. Odolwa remains a jaunty tribal blade dancer, an imposing figure that towers over Link. That is, until you knock Odolwa down, at which point a large Queen Gohma-like eye is exposed for you to wail on to the tune of massive damage.

It seemed like an odd, fairly minor alteration, a thematic link back to the piercing eyes on both Majora’s Mask and the sinking moon. The differences didn’t end there, though.

Upon returning home I picked up my copy of the original game and battled Odolwa while referencing some footage shot by IGN. I noticed a handful of subtle revisions, such as the disappearance of Odolwa’s ring of fire and moth attacks. Perhaps they were deemed too frustrating and were removed to create a more streamlined experience.

It seems something similar happened with Gyorg, the fishy lord of the Great Bay Temple, who also exhibits a large new eye and distinctive attack patterns in the new game.

YouTube channel GameXplain has shared footage of the boss battle, wherein Gyorg swims along the surface of the water, as opposed to deep below, thereby eliminating a frustrating camera issue present in the N64 version. Moreover, the platform at the center of the room is submerged at the battle’s climax, forcing Link to transform into a Zora and take on Gyorg in its element.

It’s likely other tweaks exist elsewhere. At least we needn’t wait much longer to find out.