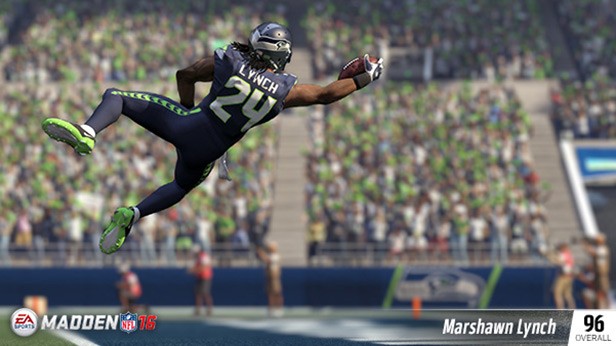 I’m just here so I don’t get fined

Madden 16 used the above photo for Marshawn Lynch in its running backs player rating reveal. He is, naturally, number one at 96 overall.

He cannot, however, grab his dick in defiance, as he is wont to do in real life.

Polygon asked EA Sports if the dick-grabbing celebration would make it into the game. Unfortunately, seems we got a real Aliens: Colonial Marines brewing here. “Sadly no,” the  representative said. “One of our capture guys tweaked his arm placement for this shot, it’s a variation of the celebration dive where the player puts his other hand behind his head.”

Boooooooo. No wonder they call it the “no fun league” am I right folks?

This isn’t the first time EA has tried to trick people with Madden. Last year, it pretended like the PS3 and 360 versions weren’t outdated crap when, in fact, they were outdated, poorly running crap. The current gen versions were just okay, but the review was great, so read it.

Madden 16 won’t be much any dramatic improvement. Last year’s game is being used as a “solid core” around which EA can go back to a system of minute improvements. It doesn’t help that, “Sales were up significantly last year,” which means that the mild work of finally doing a full development cycle on the new consoles was enough of a refresher for most fans. Madden 15 sold over 6 million, falling behind only Call of Duty: Advanced Warfare in the US.

No, Marshawn Lynch will not grab his crotch in Madden NFL 16 [Polygon]
Have you given up on Madden? EA believes Madden NFL 16 will win you back [Polygon]