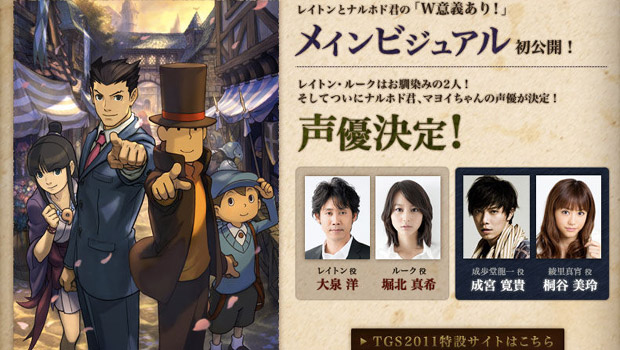 [Update: According to GamesRadar, an English release might be possible. Hmmmmm…]

Guess what game wasn’t playable at the Tokyo Game Show this year. Good guess if you said, “Professor Layton vs. Ace Attorney“! Now, when will it actually be playable? If you said, “At the LEVEL5 WORLD event in Tokyo on October 15 and 16,” then you cheated by reading ahead! Minus 50 points from Gryffindor!

Other bits and pieces have rolled in as well. Famitsu has supplied a smattering of screenshots from the 2012 3DS game, which I’ve uploaded to the gallery. Now, thanks to the 3D effect, when Phoenix extends an accusatory finger, it will be like his hand is breaking through the screen and pointing at you! Shock and awe!

In addition, the voice cast has been announced. Layton and Luke will be voiced by their usual Japanese actors, Yo Oizumi and Maki Horikita, while Phoenix and Maya will be voiced by Hiroki Narimiya and Mirei Kiritani. Who are they? Why, they are playing the same roles in the live-action Ace Attorney film, directed by Takashi Miike.

Next up, Western localization… no? Not yet? Awwwwwwwwwwe maaaaaaaaaaan *kicks dirt*. Is that a strong maybe I hear?