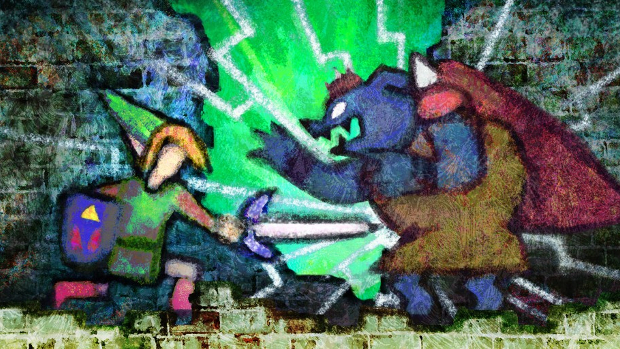 So, some changes were made to accommodate the 2DS. “It’s not that you can’t play it with 2D, it’s just that it becomes clearer when you have the 3D effect on,” Aonuma explained. “We found out about the 2DS during development, not before, and we also made changes so that we were sure that you could still play and solve the puzzles only with 2D. It’s definitely still playable in 2D!”

However, Aonuma is also sticking to the script that this might just be what 3D needs to win over a less than enthusiastic audience. “A Link Between Worlds is being developed with 60 frames per second,” he said, “and previous Zelda titles were about half that, about 30fps. The reason for this is because the 3D effect is much more stable with a higher frame rate, with the 60fps. If it’s lower than it’s sometimes hard for your eyes to focus on the appropriate image. We think we’ve created a game that even those who found it difficult previously to see the 3D effect would be able to see it better and enjoy it more with this title.”

Even at its best, 3D on the 3DS, for me, is a novel thing I’ll turn off after five minutes of fiddling  I don’t see that changing, and I’m sort of glad the 2DS encouraged the team to make sure it’s totally accessible in 2D.

The Legend of Zelda: A Link Between Worlds changed slightly because of 2DS [GameSpot]