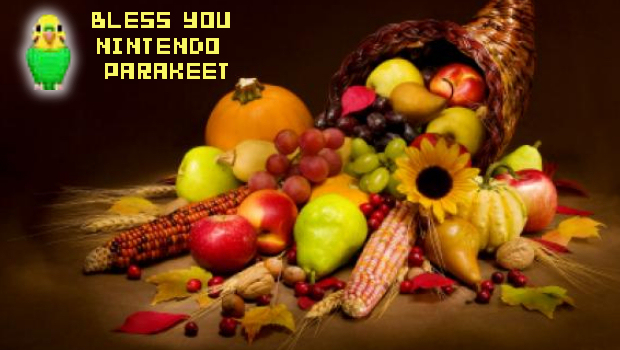 Dedicate your Thanksgiving to the BEST holiday bird

It is Thanksgiving Day, that day we celebrate Christopher Columbus sailing to Nazareth in a gigantic turkey, and we are to be grateful for all the wonderful things that have happened at us over the course of our short, and ultimately pathetic, lives.

As a gamer, I am particularly thankful for the Nintendo Parakeet, the oft-overlooked mascot of the Nintendo DS’ voice recording features. Appearing in DSi Sound, and joined by two of his friends in 3DS Sound, the Nintendo Parakeet has acted as a faithful guardian of children the world over, watching with stoic patience as 8-year-olds make “hilarious” noises into their portable consoles and play with the settings to make the voice go deep. Or, more importantly, keeping its beak shut as they say “fuck” or “fuckhouse” in their bedrooms where the parents can’t hear them.

Be thankful for the Parakeet’s silent vigil.

In our house, the Nintendo Parakeet has taken on an almost messianic quality, replacing both Jesus Christ and Santa Claus as a beloved family icon. He serves as an omnipresent onlooker, ensuring the boys and girls of the village do their chores and say their nightly prayers, lest he be cross with them and visit only retribution on Parakeetmas.

“Be good this year, or the Nintendo Parakeet won’t visit to bring you sweetmeats and spices from the New Continent,” I tell my son, Franco.

“I will be good, Papa,” he answers. “Reggie bless the Nintendo Parakeet, and the fabulous silks he has brought us from Eastern lands. May I not anger him, lest he only leave copies of Call of Duty: Black Ops Declassified under the Parakeetmas Palm Tree this year”

On this day of thanks — or as we call it, Parakeetsgiving — we remember all that the Nintendo Parakeet has done for us. We thank it for allowing us to use our DSi to make us sound a bit like Starscream off Transformers or Dr. Claw off Inspector Gadget. We are grateful that it is yellow and green, which is a bit like the Sundrop logo, and it reminds us of that amusing commercial where the woman is dancing all over the place.

We thank it for never showing its envy when fools talk only of Mario or Link, but overlook, with criminal negligence, that which should be the most iconic Nintendo character of them all. We know it belongs in Super Smash Bros. as the most overpowered fighter in the game (but allowed in tournaments anyways because it’s the fucking Parakeet), but it does not say these things itself. It does not demand. It only serves. And we are thankful.

Most of all, we thank it simply for being the Nintendo Parakeet. Thank you Parakeet, and I am sorry my Pumpkin carving was so shit this Paroween.