It’s easy to forget that a fair amount of iteration has come to the Lego video game series over the past decade. All the titles — there are upward of 20 now — are similar in that they’re whimsical, lighthearted takes on popular subject matter. In that sense, they’re all alike.

But, the franchise has grown considerably. For instance, the earliest games had moderately-sized yet functional hubs; now, the overworlds are massive and contain hours’ worth of content on their own. Another good example is that Lego characters talk now, whereas they used to rely on exaggerated nonverbal movements to emote. 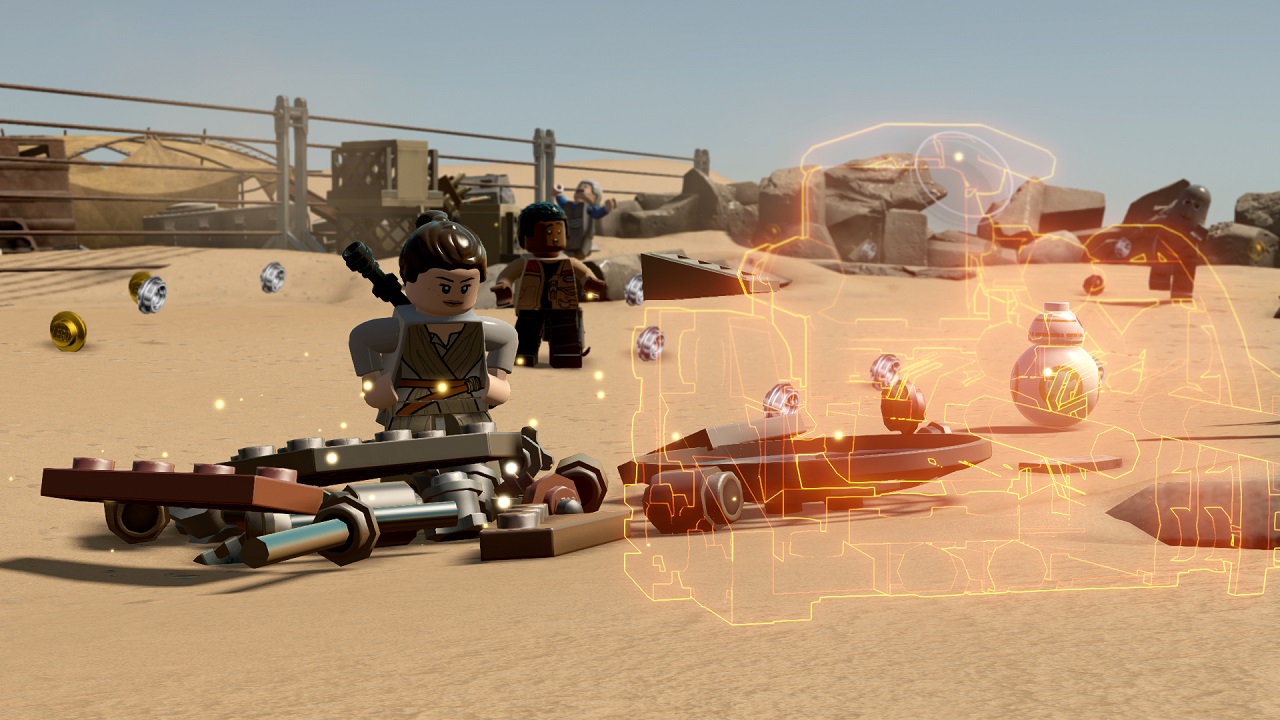 Having watched a full-blown presentation and also after playing a little bit of it myself, I think blaster battles are probably the most exciting addition to Lego Star Wars: The Force Awakens. In a very elementary way, it’s like a hypothetical Lego Gears of War (a game that I would absolutely love to play). There’s a third-person cover shooting system that requires ducking down when the enemy’s shooting and popping up and popping off at an opportune time. It seems serviceable.

If blaster battles are the most exciting, multi-builds are the most substantial. In the past, piles of bricks would be automatically constructed into something useful with the press of a button. In Lego TFA, many of these brick piles can be built a couple of ways. The game gives the player the option of building different, although still preset, objects.

Speaking with lead story designer Graham Goring, he elaborated on how multi-builds will work. Sometimes, one of the objects will amount to nothing more than a decoy — just something that kicks out a few extra studs but doesn’t actually advance the game. In that case, the player needs to just smash it up and build the other thing. However, there are situations where one object needs to be built first to solve half of a puzzle, and then the second object contributes to the other half.

The obvious concern here is that complicating the process might make things too inaccessible for the kids in the audience. Goring says that he doesn’t see it that way. In his opinion, multi-builds aren’t any more difficult than the bulk of the other puzzles the series has implemented over the years. And, if they are too complicated, there’s probably an adult on-hand to help out.

The third improvement, flight gameplay, is the one that I’m the least sold on. There are arena-based battles and space dogfights, but those seem like events that have been in past games. There’s the possibility that they’re markedly better now, but not in any way that I could discern. We’ll have to wait and see about that.

An interesting thing to note about Lego Star Wars: The Force Awakens is that this is maybe the least amount of subject material that Traveller’s Tales has fit into one game. Other Lego titles tackle several pieces of media at once, like all the Lord of the Rings or Indiana Jones movies.

Goring acknowledged this and commented that it allowed the developer to elaborate on all the important scenes from the movie as it pleased. No one confirmed it, but my speculation is that we might get to play as the villains’ side too. It seems a logical step in making one movie have a similar breadth as three.

Lego Star Wars: The Force Awakens launches on June 28. It’s an odd time, some six months after the movie’s release. It’s also the only really feasible time. Releasing alongside the likes of Star Wars Battlefront and Fallout 4 would be a death sentence for a Lego game; everyone seems realistically-minded enough about that. So, mid-summer it is — a fine part of the year to play a Lego game and another opportunity for Disney to constantly keep Star Wars in the public consciousness.