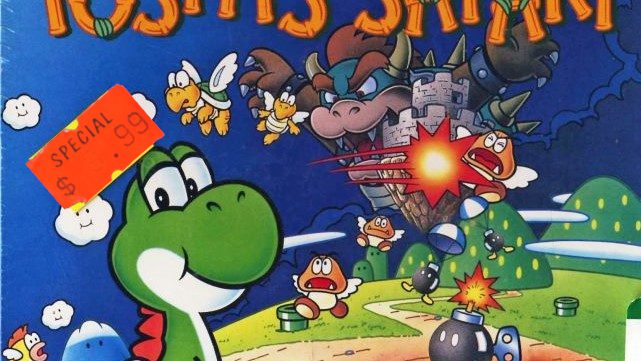 I’ll give you my Super Scope when you pry it from my cold, dead hands

I remember a lot of the stupid discussions that were had on the schoolyard. Mario should have a gun. Zelda would be cooler if there were guns. Kirby needs a rocket launcher. Apparently, in the ‘90s, guns were just the height of cool. You’d brag about it if your parents let you watch Robocop, and therefore everything needed to be Robocop.

Strangely, though, the concept of Mario with a gun did happen. Yoshi’s Safari. It was one of the games that supported the Super Scope, and it was completely batshit. 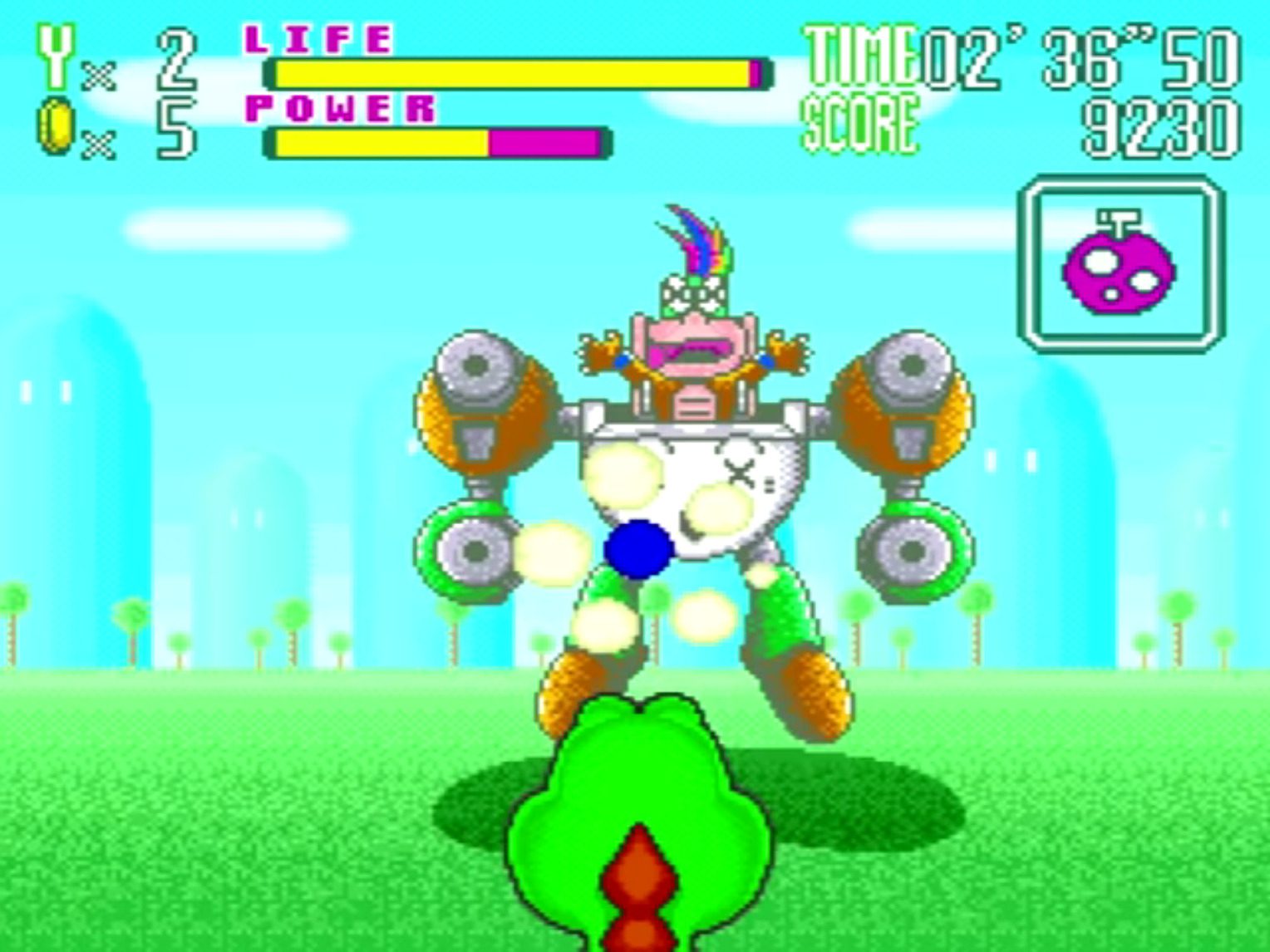 I get it. I do. Nintendo’s fancy new peripheral needed their key mascot to help sell units. Never mind the fact that Mario doesn’t look quite right with a rocket launcher over his shoulder, that’s probably why this game is in the first person.

Yoshi’s Safari is a game about mercilessly gunning down wildlife as it crosses the road. I’d say that Mario has finally lost it, but really, murdering animals is what he does as a hobby. This is the first time that he’s brought his second amendment rights into the mix, however.

This time around, Mario’s massacre is in the Jewelry Kingdom. Bowser and his illegitimate children have kidnapped the country’s leaders, as well as their 12 jewels, and demand that their kingdom be recognized be the United Nations. Mario, a special agent in the Mushroom Kingdom’s foremost espionage agency, has to go and defuse the situation by any means necessary.

I’m sorry, I seem to be having trouble keeping to one headcanon. 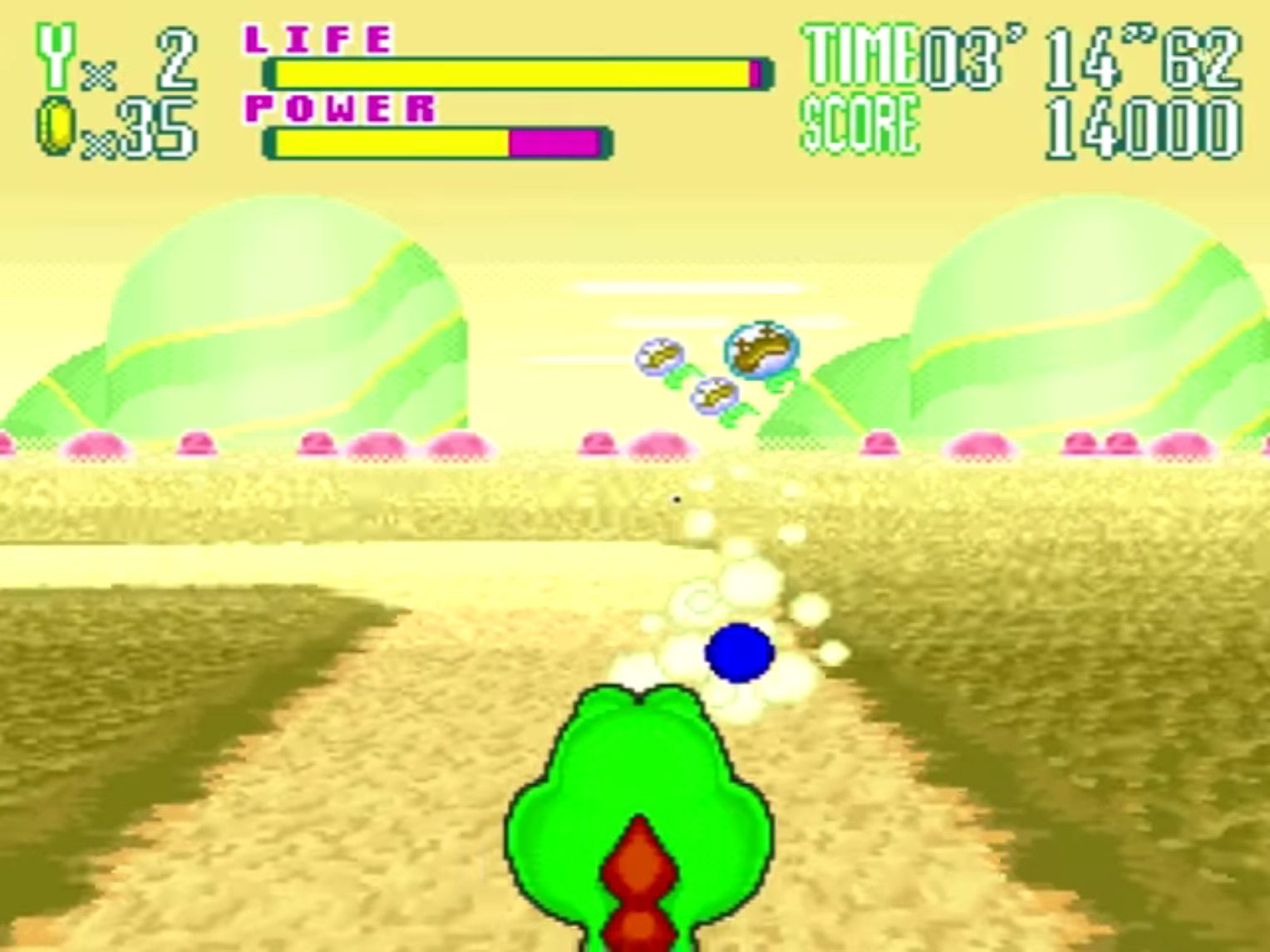 Regardless of whatever pretense I make up, the goal is to blast your way along a series of roads, then take out the bosses. There are multiple routes you can take in any given stage, but they all lead to the big baddie at the end.

Truthfully, Yoshi’s Safari isn’t that bad. I’m something of a Super Scope apologist, and while I’d typically point to Battle Clash as what you should play with it, Yoshi’s Safari is rather inoffensive. If there’s a problem with it, it’s the absolute lack of challenge. They maybe had a younger audience in mind when they made this, but you can absolutely plow through the entire game in an afternoon.

Gameplay-wise, it’s your usual fodder enemies and weak-point bosses. It’s not the most inventive game, but the main has you riding atop Yoshi over mode-7 terrain. While, cynically, it’s just a shooting gallery with a moving background, the addition of jumps and different routes keeps things a bit interesting.

If you have a second player who is clearly beneath you on the social totem pole, you can hand them a controller, and they can steer Yoshi as he moves on rails while you have all the fun. It’s sort of like having someone play as Tails in Sonic the Hedgehog 2; they’re not really contributing, but maybe pressing buttons will make them shut up. 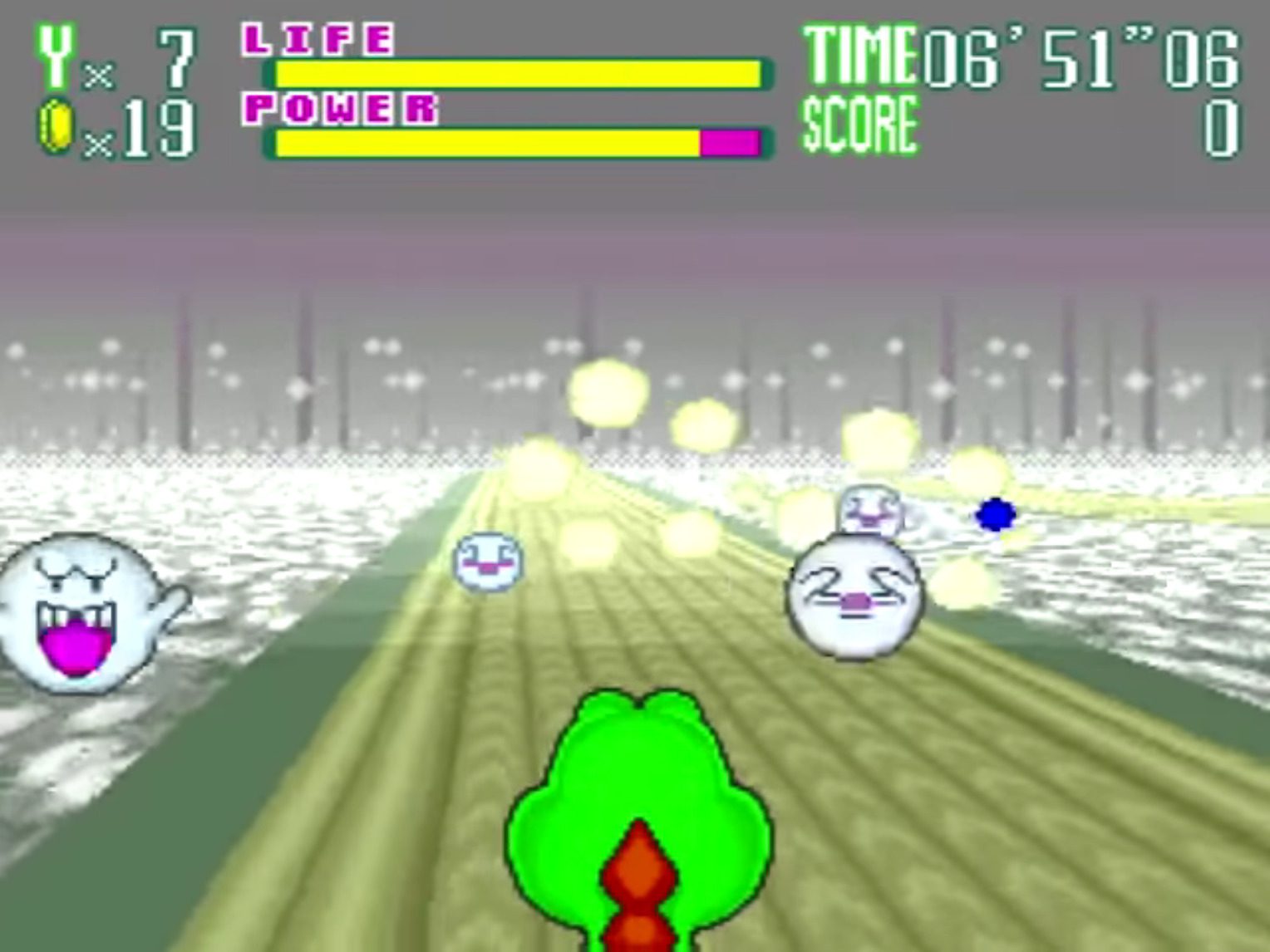 The enemy types are fairly diverse, and the bosses can be fun. There’s one boss with a weak point on its crotch, which I’m always a fan of. I mean, when you’re just pasting targets on a 2D image and trying not to put it the same place each time, one is eventually going to land between the legs.

Speaking of severe pain, all the Koopalings pilot these robots that look like animals for some reason. What’s bizarre about them is that most of them react to being shot. Like, pained expressions. Faces contorting in agony as you deliver shots to their personal weak spots. Why would you design a robot that feels pain? Is it so that it can better understand the cruelty of a world where plumbers mercilessly annihilate everything in their path? This isn’t science, it’s madness!

Also, they’re pretty uneven in their difficulty. As I said, Yoshi’s Safari is pretty lacking in challenge, but the hardest fight I experienced was against a pack of Boos, and that wasn’t placed anywhere special. 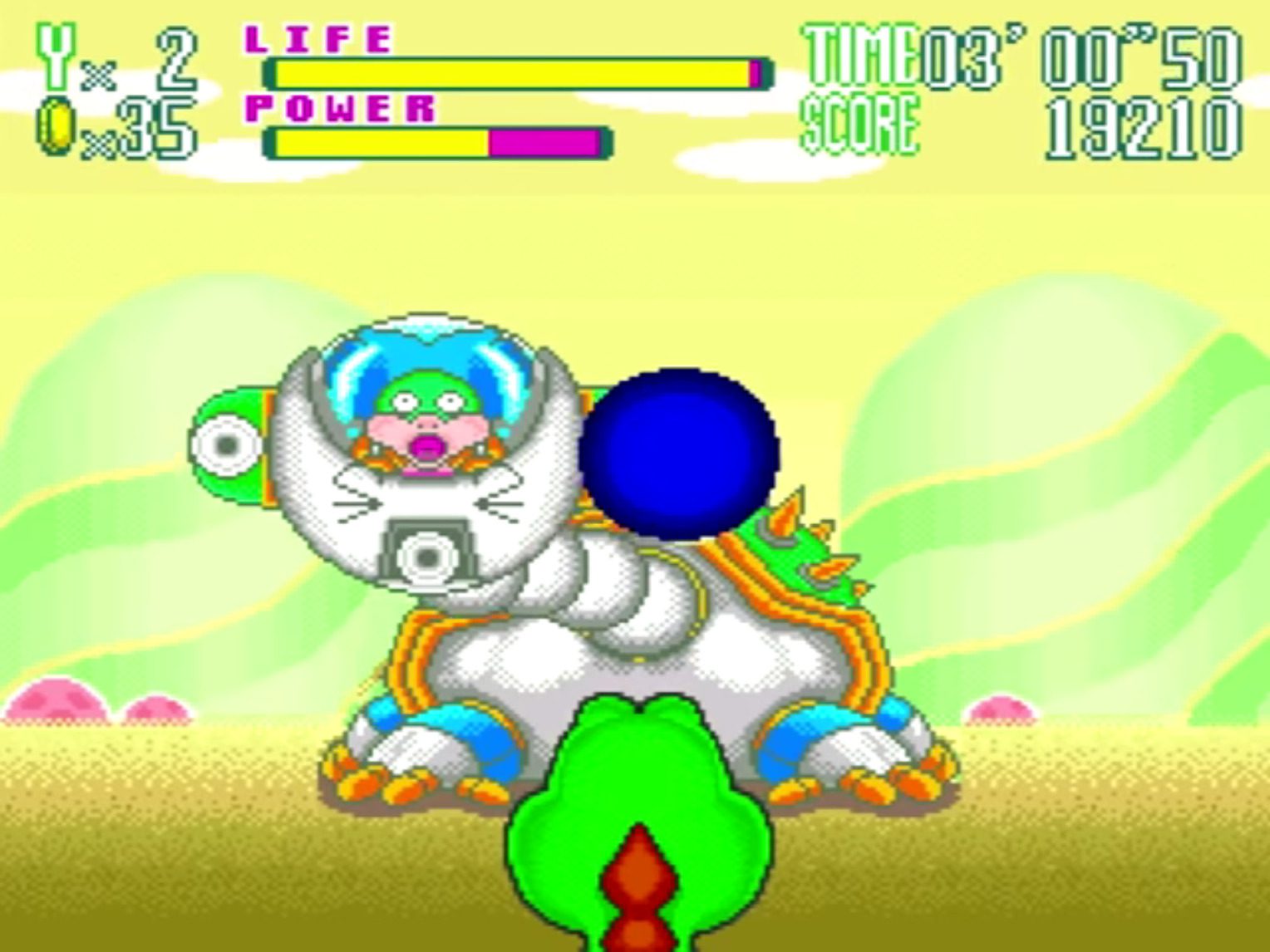 If you have a Super Scope, your options for games to play with it are pretty limited. In fact, aside from Battle Clash and its sequel, Metal Combat: Falcon’s Revenge, most aren’t worth it. You also need a CRT TV for the Super Scope to even work. It’s a sad state.

Sadder still is that Nintendo isn’t likely going to re-release these games. They seem to like pretending that Yoshi’s Safari didn’t happen. It was released as something of a last effort to make the Super Scope relevant, but it wasn’t enough. Maybe kids really do need more than just giving Mario a gun.

I guess what you can take from all this is that you should play Battle Clash and Metal Combat. Yoshi’s Safari can stay in the dust bin, but those two games don’t deserve obscurity. They’re like Punch-Out!! played with a light gun. Big and bright and colourful, packed to the brim with ridiculous personality.

What were we talking about? Oh, right: Mario has completely snapped.