[This piece was originally published in 2015. In light of recent rumors about the next Nintendo Direct and an ensuing eyebrow-raising tweet from Nintendo of America today, it just felt right to revive it. -Jordan]

Chibi-Robo is a refugee from GameCube country, born from the co-mingling DNA of the industry’s most well-known publisher and one of its least mainstream-friendly developers, he was ready to die from the moment he hit the ground, aiming to please at every turn. It’s actually a gosh darn miracle that he’s still here. After a commercially tepid GameCube outing, a Walmart-exclusive handheld follow-up, a Japan-only return to housecleaning, and a largely ignored AR photography title on the 3DS, it’s seemed that every Chibi-Robo release has been poised to be his last.

Now Chibi is back for what may be his final grasp at success. This time he’s in a 2D action platformer, a historically popular genre on Nintendo consoles, with a pack-in amiibo to boot. If he doesn’t make it this time, he likely never will.

A small but dedicated fanbase who covet strange, silly, and sincere video games are currently on the edges of their seats, preparing to either cheer for Chibi-Robo’s long-awaited triumph, or mourn his final passing. Maybe he’ll live, maybe he’ll die, but no one will be able to say he didn’t try. 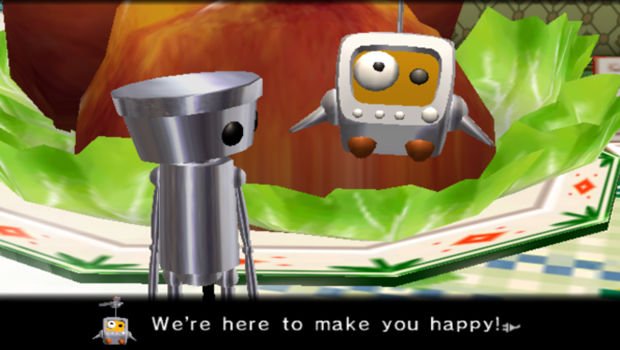 When talking about Chibi-Robo, or a variety of Nintendo’s other more interesting games, you really have to start with EarthBound. The game defined a side of the company that has endeared it to many who might otherwise pass over its largely safe and child-friendly catalog. Ironically, the thing that makes EarthBound special is the way it cares about little aspects of regular life that many other games may ignore. Not many mainstream games prop up understated emotional connections between seemingly incidental characters like EarthBound does.

That’s a big part of why the game struggled to find an audience with Western gamers in the ’90s, but they are also why EarthBound has grown to have one of the most passionate fanbases in gaming today. While the game failed at its initial Western release, it’s now a bigger hit than ever. Despite its initial struggles, EarthBound proved to be emblematic of the direction Nintendo wanted to take narrative-based games as it moved into the industry’s polygon era. It was while facing in this direction Nintendo published other empathy focused, minutia-hugging titles like Animal Crossing, The Legend of Zelda: Majora’s Mask, Elite Beat Agents, and perhaps most of all, Chibi-Robo. 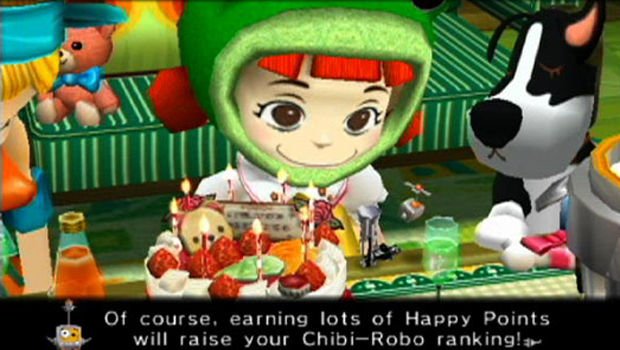 While Majora’s Mask cares very deeply about small moments between characters, it covers that priority behind the false face of an Ocarina of Time spin-off. That caused the title to disappoint many who expected it to follow the same epic structure of Ocarina, though like EarthBound, the game has gradually built an audience over the years that loves it deeply. Likewise, Animal Crossing touted itself as a real-time life sim about town management and item collection, though beneath those marketing campaign bulletpoints lies a game that is mostly about enjoying moment-to-moment interactions with a small and sweet world.

What makes Chibi-Robo different is that it didn’t have any of those surface-level selling points to draw new players in. The first game in the series was unabashedly unusual, putting the player in the role of a newly purchased pint-sized robot whose owners have a variety of emotional problems.

The father is an exuberant and well-meaning nerd so intimidated by his real-life problems that he spends much of his time and energy fantasizing about a super sentai TV show. His daughter is an escapist too, though instead of dreaming of being a hero, she has decided that she is a frog, speaking in ‘geros’ (the sound that frogs make in Japanese). The matriarch of the clan is unable to relate to either her husband or daughter. All she wants is a normal life, though there are times when divorce is the only option she can fathom. Then there’s the dog, who is forced to watch all this in relative silence, unable to talk sense into anyone around him. 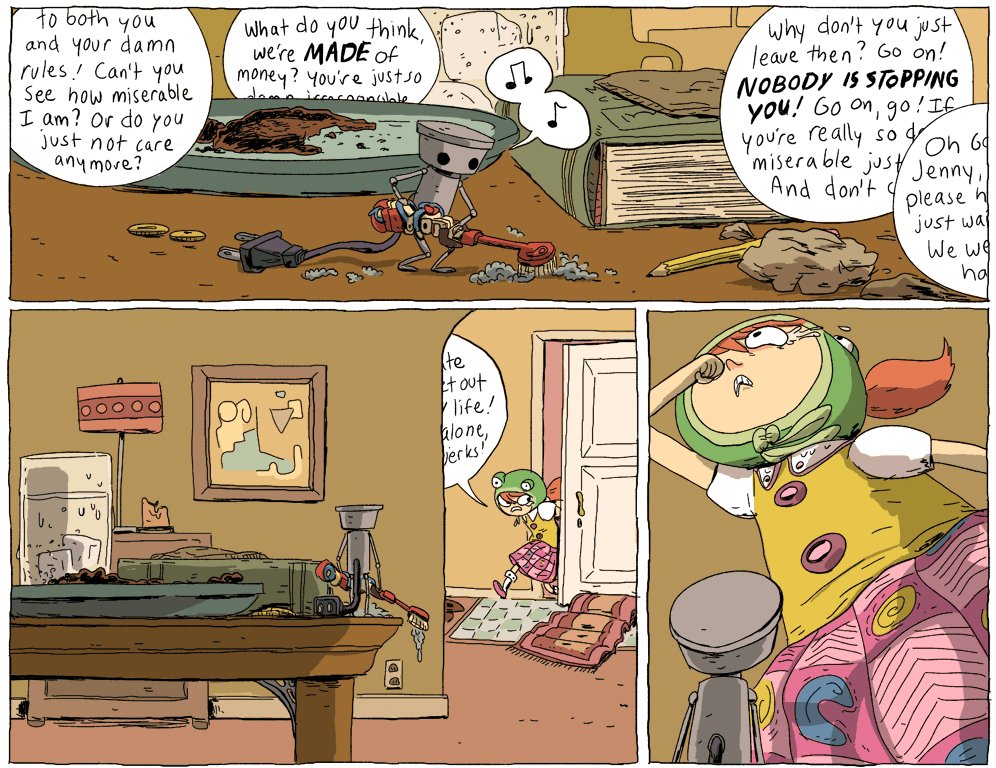 This is the world Chibi-Robo is thrust into, a new toy who’s expected to somehow make all these people happy. Codependence is in his programming. Selflessness is in his circuits. Optimism in the face of ever depleting energy and dysfunctional family dynamics is his only choice. He charges into fate headfirst without hesitation, determined to help, ready to fail.

And he did fail

The first Chibi-Robo wasn’t a total bomb, but it didn’t do nearly as well as other newly published Nintendo intellectual properties on the GameCube like Pikmin and Animal Crossing. The game was a little hard to understand for new players, mixing open-world 3D exploration, action, resource management, and puzzle solving. Much like the PlayStation 2 hit Grand Theft Auto III, Chibi-Robo was a jack of all trades and master of none. The difference is, Chibi-Robo doesn’t know how to carjack.

The games also share structural similarities. They both begin with a limited tool set and mostly menial tasks to take on, slowly drawing you into a larger and larger world filled with colorful characters and more empowering and elaborate methods to meet your goals. The big difference is, Chibi-Robo starts you off cleaning stains off the family carpet with a toothbrush, while GTA III has you staining the streets red with blood. The joyful sociopathy and unrepentant worship of the American Gangster mythos proved to be enough to compensate for the lack of focus or polished mechanics of the first 3D GTA releases. Chibi-Robo’s joyful selflessness and unrepentant worship of people pleasing weren’t able to pull off the same trick. 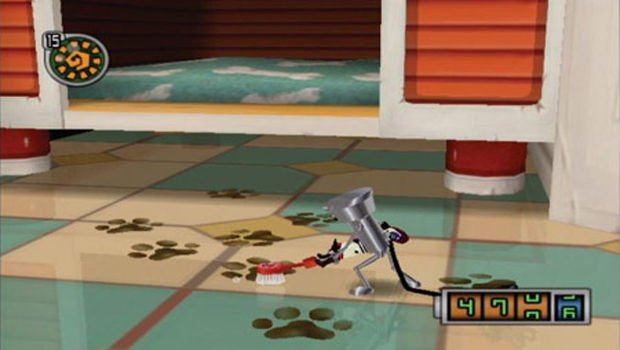 One might also argue Chibi-Robo had a messaging problem. While Chibi himself looks cold and unfeeling, he lives like a guardian angel, brought down from technology heaven to save us all. He’s the polar opposite of the increasingly soft and alive-looking humans engaging in increasing inhuman behaviors that populate the generation of AAA games that were born on in the PS2/Xbox/GameCube era and the generations that followed.

Since day one of his career, the tide of the industry has been turning against Chibi-Robo. Given the relatively limp response to his first game, and little reason to believe that more games about pint-sized care-taking robots could thrive in a post-GTA III market, it’s nothing short of a miracle that Chibi is still around today. Yet here we are, in the year 2015, on the cusp of the release of the fifth Chibi-Robo game. 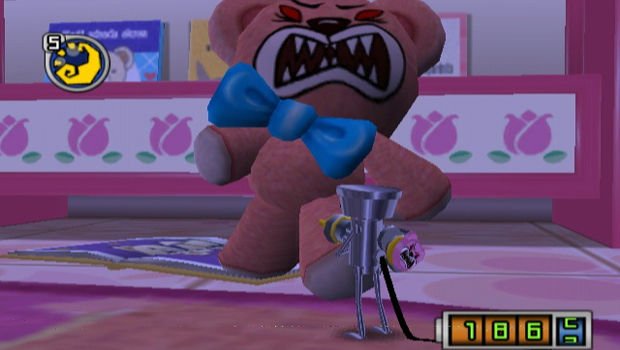 Prior Chibi-Robo titles never swayed from their focus on spreading joy. In parks, under couches, or in the disorganized den of an an old nostalgia hound, Chibi-Robo never stopped trying to make people happy. From the sound of it, Chibi-Robo! Zip-Lash may be the first game in the series where happiness is not a priority. If so, it would be hard to blame Chibi for giving up on his largely unappreciated pursuit of altruism.

Regardless of what Chibi turns toward for this next outing, we would do well to pray for him. If the roles were reversed, you can be sure he’d be praying for us. In fact, he’d probably be sending us prayers while cleaning our carpets, planting our flowers, and fixing our marriages, all before tucking us in for the night with the last of his power, even if he had to spend all evening traversing our bed sheets with his meager four-inch body. That’s just how much he cares.

Also, this is probably the best bass line in music history.