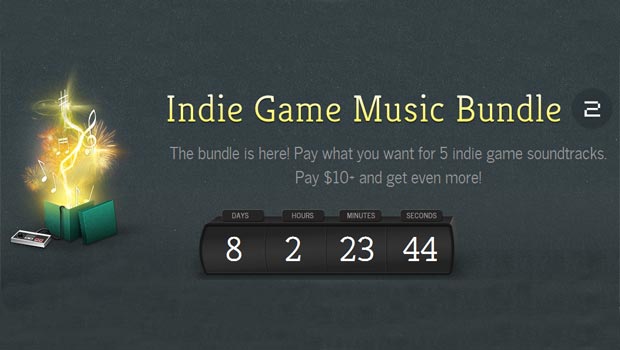 Remember the Indie Game Music Bundle where you were able to pick up ten game soundtracks for a mere dollar? Well, it’s back, and with a pretty snazzy twist. Those who want to dish out another dollar will get the soundtracks to Aquaria, Sword & Sorcery, To The Moon, Jamestown, and Machinarium. A pretty great deal as is as these are some of the biggest indie game soundtracks of 2011, but if you want to dish out $10, you’ll get nine more soundtracks including Shatter (my favorite soundtrack of 2010), Jake Kaufman’s recent (and amazing) Mighty Switch Force!, the chiptacular Tower of Heaven, and A_Rival’s 8-bit Pimp among others.

But things get really interesting as more albums are unlocked for all those who’ve purchased the bundle thus far as certain sales milestones are reached, adding a social element to the sale. Beyond that, you can pay as much as you’d like for the bundle, and the highest bidders will receive special prizes that include a Shatter limited edition vinyl signed by the composer, physical soundtrack releases from some of these games, and more. The entire list of prizes and soundtracks that are included can be viewed here on the sale’s official website, so get on it before the sale ends (you have eight days!).

Are you happy to see a round two for the Indie Game Music Bundle? Do you have any favorites from the list that are worth the price of admission alone?