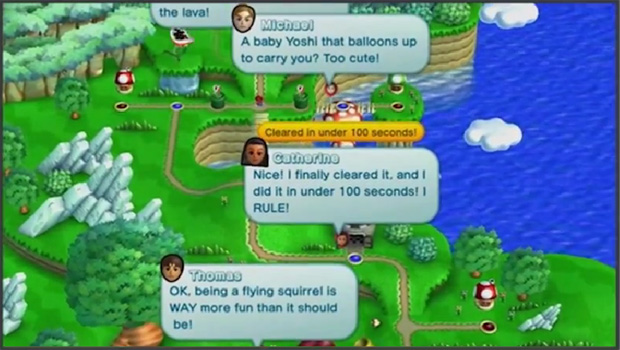 We’re just about an hour out from the Pre-E3 Nintendo Direct 2012, and people are already getting into a deep analysis of the scant bits of new game footage that was shown. In Nintendo’s bizarre new video showing off Miiverse functionality, there were a few seconds of footage of what looked like a new 2D Mario title. We saw a new, stranger background, a Super Mario World-style overworld map, and some Miiverse text messages from other players that might hold clues to what other features the game has in store.

They include talk of a “baby Yoshi that balloons up to carry you,” talk of an achievement looking thing for beating a level in less than 100 seconds, and how “…being a flying squirrel is WAY more fun than it should be.”

This could all be references to hypothetical aspects of gameplay, but with E3 just a couple of days away, I wouldn’t be surprised if these are legit leaks regarding the new Mario title for consoles.  A flying squirrel would make a lot of sense for a Mario game, as would baby Yoshis. I’m sure we’ll find out for sure what’s going on here soon enough.