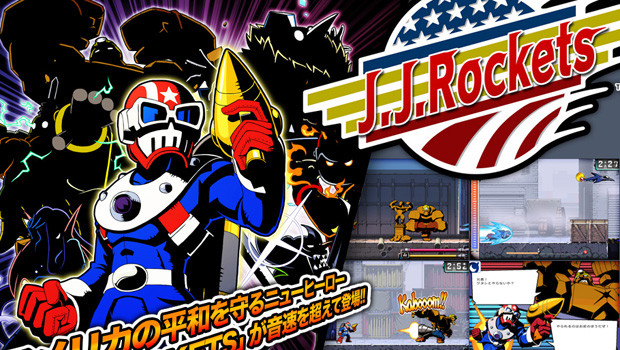 Keiji Inafune is a busy man. In the excitement of today’s announcement of YAIBA, we failed to mention that his Comcept studio teamed up with Marvelous for another game that was actually just released.

J.J. Rockets is a side-scroller for mobile devices that places you in the role of the President of the United States (Metal Wolf Chaos, anyone?), who dons a superhero suit to exercise his “executive orders” with some good ol’ fashioned pew pew pew. With an arsenal of 200 weapons, you tackle short missions that must be cleared in under three minutes, boss encounter and all.

It sounds more than a little Mega Man-ish with an art style reminiscent of Viewtiful Joe, and I am totally sold. It’s currently available only in Japan on Android devices, for free if you are a member of the Mobage social gaming service. Eventually it’ll come to iOS devices, after which I hope they consider global plans. Who wouldn’t want to be an ass-kicking President?