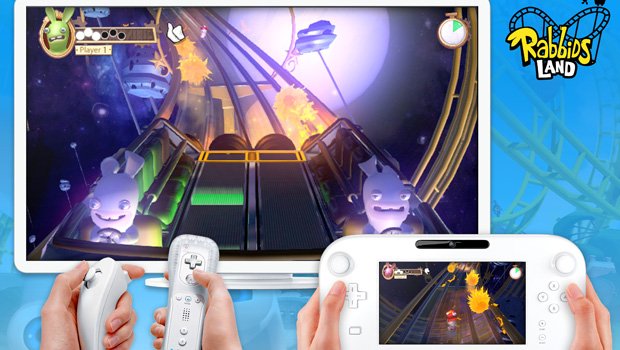 I remember picking up the first Rayman Raving Rabbids game when the Wii launched in 2006. While I had planned on buying Red Steel alongside Twilight Princess (a purchase mandated by Nintendo fan law), a negative early-morning review had convinced me to drop the mediocre FPS in favor of a minigame collection that seemed much more fun. Was Rayman Raving Rabbids worth the $50 I paid at launch? Hell no, but I sure got more enjoyment out of it than when I played my friend’s copy of Red Steel.

Since then, the Rabbids have become a successful property of their own, not only because of the Wii’s lucrative minigame market, but because of their charming, silly personality. I never picked up any of the original game’s sequels, and part of me feels like the Rabbids’ schtick is played out, but I’d be lying if I didn’t crack a smile every time they do something silly or scream “BWAH!”

And so as it was with the Wii, it is with the Wii U. Ubisoft is making a new game in the series, Rabbids Land, that is set to be a launch title for Nintendo’s new system. This time around, the Rabbids are taking aim at Mario Party.

In Rabbids Land, the Rabbids have invaded an amusement park and intend to have a good time, rules be damned. This takes the form of a board game punctuated by minigames. My demo didn’t really show how the board game would be set up, but focused on a few of the minigames so that I could see the possibilities of the Wii U controller.

The first minigame I played took its inspiration from Indiana Jones. The Rabbids dressed up like the famous adventurer and rode around on top of boulders in a vaguely Temple of Doom-themed area. Like many Wii U games this year, this one featured asynchronous multiplayer. One player tilted the Wii U GamePad horizontally to control three Rabbids on small boulders and gather ten diamonds. Meanwhile, the second player tilted the Wiimote to move one Rabbid on a big boulder who needs to squash the other player’s Rabbids. The Rabbid on the big boulder could roll faster than the Rabbids on the smaller boulders, but the weaker Rabbids could slip through small green gates to momentarily escape their hunter.

The GamePad had a top-down view of the entire area while the TV screen had an angled, slightly zoomed-in view, but in practice this difference didn’t matter. If the big boulder Rabbid couldn’t see one of the smaller boulder Rabbids, it was obvious that it was in the corner not currently visible. It might have been a lot more interesting if the small green gates shifted over time and were only visible to the GamePad player, but as it was, there wasn’t anything here that couldn’t have been done with two Wiimotes on one screen. Innovation aside, it was a fun game, with good tension for both players.

The other minigame I was able to check out was a riff on a Tunnel of Love ride. The two players must work together to help unite soul mates by picking them out of a crowd. The identification process is both silly and dirty: pull up the Rabbids’ skirts or kilts to see if they have matching symbols on their underwear. This game showed off asynchronous multiplayer much better than the first, thanks to the different views actually mattering. The Rabbids have different symbols on their fronts and backs, and each player can only see one side.

So the Wiimote player aims at a Rabbid, presses A, and aims higher to lift the skirts or kilts, while the GamePad player simply drags the clothing up with their finger. The goal is to find as many matching pairs as possible before time runs out, and all the Rabbids are replaced once a pair is found. It turns into a shouting match as both players try to compare and match the symbols they have as fast as possible. Well, that’s what it would be in theory at least, since my Wiimote partner seemed very overwhelmed by the concept and only spoke up once he had very carefully analyzed all of his Rabbids. Despite my partner’s reluctance to have any fun with it, I could see this being a good icebreaker game at parties.

There are many more minigames set to be included in Rabbids Land, and I’d imagine not all of them make “innovative” use of the GamePad. But if they’re as fun as the Indiana Jones minigame, it shouldn’t really matter. The GamePad just opens up more possibilities; there’s nothing wrong with using old methods if they work. I’d still be interested in seeing how fun the board game element is before committing to Rabbids Land over the inevitable Wii U Mario Party installment.